It was with great sadness that I learned of the death of Harry Hood. He was one of my favourites, at a time when I had many favourites and he was certainly one of Celtic’s better goalscorers. Fast, direct and prolific, he was itching to get to Celtic long before he ever got there, and I cannot help feeling that if the McGrory regime had gone for him in 1964, things might have been different.

As it happened, he went to Sunderland instead – that graveyard of many players – returned to Clyde and it was March 1969 before he first donned the Hoops, scoring a vital goal at St Johnstone late in the game to give Celtic a victory.

Of course the competition for the role of the striker was stiff. But Stein knew a good goalscorer when he saw one, and Harry fitted that role to perfection. Several great moments spring to mind. One was the taking of the penalty kick in the replayed final of the Scottish Cup of 1971, another goal in the 1974 Scottish Cup final against Dundee United in 1974, his hat-trick in a League Cup semi-final against Rangers in 1973 – a rare phenomenon – but the best of all was surely the goal in September 1969 at Ibrox which earned us a 1-0 victory over Rangers.

The rain was heavy, the ground was wet, but Harry’s swivel and shot was a thing of exquisite beauty, leading to the birth of the “Hare Krishna” chant – except that the Celtic version ended up with “Harry Hood”. There was also the “We don’t need your Colin Stein, We don’t need your Alan Gilzean, We’ve got someone twice as good, We’ve got Harry Hood!”

Tommy Stevenson ( Watched both players from the Jungle to Lisbon)

In issue 104 of More than 90 Minutes we pay tribute to Billy McNeill and Stevie Chalmers both heroes of Celtic greatest ever side and conquerors of Europe. Billy graces the front-cover and we have a tribute centre page poster of both Lisbon Lions.

Michael Pringle tells us why Billy McNeill and Stevie Chalmers names will live forever and David Potter pays a tribute to Stevie’s time at Celtic.

Celtic Historian David Potter looks back on our Scottish Cup history v Hearts. He also heralded Frank Murphy as this editions Unsung Heroes and tells us how Billy McNeill started it all off in 1965 and he also pens a piece on the two players Billy kept out of the team. All Our Yesterdays look back at what happened in the month of May over the years.

Lisbon Lion John Fallon looks at Brendan Rodgers departure and the arrival back of Neil Lennon. Dublin journalist Rachel Lynch asks the question where do we go from here? Celtic Minded Author Dr. Joseph Bradley looks at Brendan Rodgers Celtic ‘betrayal’ and reveals just what football means in Scotland. David Potter tells us why we must keep Neil Lennon. Glasgow’s John Molloy tells us How Brendan broke his heart (well almost) and Dublin journalist Eoin Coyne tells us that the End is just the Beginning. Tim Molloy bids Farwell to Brendan and welcomes Neil back in our native tongue.

The editor catches up with Donegal Bhoy & Glasgow based musician Danny Kelly to discuss Football and Music.

Paddy McMenamin once again tells is of recent travels and shares many memories from over the years about Paradise, Rangers, Donegal and Cesar.

Dublin based Shamrock Rovers & Celtic fan Jason Maloney looks back in his own unique way at his experiences of the May Madness 20 years ago in 1999 when Rangers won the league at Celtic Park and Hugh Dallas got new windows.

Glasgow Journalist Michael Pringle is at the theatre to review Bend it like Brattbakk for us. Celtic fan Martin Donaldson reviews our annual dinner at the No. 10 hotel in Glasgow where our Editor was in conversation with fans favourite Alan Thompson. Declan McConville reviews An Evening with John Hartson at Malone’s when our Editor was once again In Conversation with a Hoops Hero.

Football Memories, Celtic FC Foundation and the Kano Foundation are all featured in the current edition.

Player of the Year

Our team of contributors’ nominate their Celtic player of the year.

The last CELTIC AM of the season will take place at Malones next Sunday before Celtic lift the 8IAR Trophy at Celtic Park Full list of guests will be annnouced early next week. Enjoy the weekend and stay safe if your attending the game tomorrow.

OH THE BLUE ROOM IS BARE

I thought Neil Lennon was edgy yesterday at his press conference. He was short with a number of the journalists in the search for FAKE NEWS.

The players are ready to do battle with Sevco tomorrow as we warm up to the Cup Final with the League and League Cup trophy secured for another year and on display in the Celtic trophy room while the Blue room remains bare.

Scott Brown will once again lead us in to battle against the team with disciplinary problems on the pitch and a club with no class as they break from tradition in giving the Champions a guard of honour. But we all knew they were classless.

The MSM are trying to make something out of nothing as Tim Weah leaves the club after a short loan spell to join the USA under 20 team in Poland. A player with a bright future and all of us here at More than 90 Minutes HQ would like to wish him all the best for the future. I’ll leave the final words to the kid.

“To you the fans, I will never forget you for all the love, support and kindness you have shown me. I don’t know as yet what the future holds but I wish to one day come back to this great club to be with you all. I will forever miss you chanting my name and hearing the beautiful song you have created for me.

“I also want to take this time to thank my wonderful team-mates for supporting me every step of the way. It was really great playing with you all and sharing some really amazing moments that I’ll never forget. Thanks so much to Celtic FC and to you the fans for accepting me. God bless.”

“One special person I want to mention is Tommy Burns,” added O’Dea. “The man signed me at Celtic and started the whole dream off. He might have left us in body but he’s never left in spirit. I thought about him every day as a player and you can guarantee he’ll be on my mind every day as a coach.”

Text/ David Potter
The Second World War did loads of bad things, not least in the case of Frank Murphy Celtic Unsung Hero that it prevented the career of Frank Murphy from flowering to its full potential. The other thing that Frank suffered from was that he kept being compared with Jimmy Delaney on the opposite wing. Delaney on the right wing was of course, a superb player, the stuff of legend, but Frank Murphy on the left was almost his equal. He was a little less flamboyant than Delaney and did not do so many unexpected things, but he could do the basics of beating a man, charging down his wing and crossing for McGrory or Crum to do the needful.

Frank was born in Gartcosh in 1915 and joined Celtic in 1934, but it was the start of the epic season 1935/36 that he broke into the first team. Celtic had lacked a left-winger since the great days of Adam McLean with Charlie Napier not really living up to expectations, and Hugh O’Donnell disappointing more often than not. But Trainer and de facto Manager Jimmy McMenemy saw a great deal in Murphy, and his belief in the youngster was paid back. 1935/36 was the season where goals rained in from McGrory, so many of them coming from the fine wing play of Delaney and Murphy.
Murphy looked like a man of the 1930’s with his center parting, so characteristic of that age. His comparatively slight frame was deceptive for he was strong enough to hold off sturdy challenges from over-zealous right backs. He was fast, direct and skillful with the ability to evade tackles. He could take a goal himself, one at Easter Road described by Napoleon (Jimmy McMenemy) as the best he had ever seen – and that was from a man who had played alongside Jimmy Quinn and Patsy Gallacher and he was particularly adept at scoring from free kicks with his powerful left foot. He was a reliable taker of penalty kicks as well.
He won League medals in 1936 and 1938, a Scottish Cup medal in 1937 before Europe’s biggest ever crowd against Aberdeen in the final, and of course the Empire Exhibition Trophy in 1938. Celtic shaded a little in 1938/39 but Murphy didn’t. He was still old Mr. Reliable, and much loved by the Celtic fans. He possibly deserved more than one Scottish cap – against Holland in Amsterdam in 1938 in which he scored a great goal – but there was stiff competition for the left wing spot. He made 243 appearances and scored 77 goals for Celtic, the only team he really played for.
The Second World War changed everything – and for the worse. Murphy served in the RAF, and by 1946 was probably too old, his best years having been lost to the unfortunate necessity of beating the Nazis. In later years he got a job at Celtic Park on match days, reading out the teams over the loudspeaker! He was a fine Celt and he passed away in 1984, which was considered a great loss by everyone at Celtic Park.

Join us for an intimate evening with Celtic goal machine John Hartson …..hear about John’s glittering career at Celtic, addiction, beating Cancer and life after football.

Charity Raffle & Auction on the night for Baby Noah 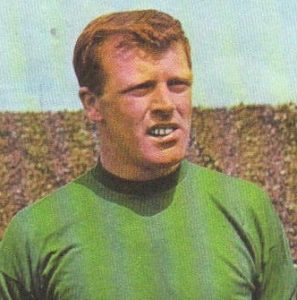 The Bhoys from the County Hell