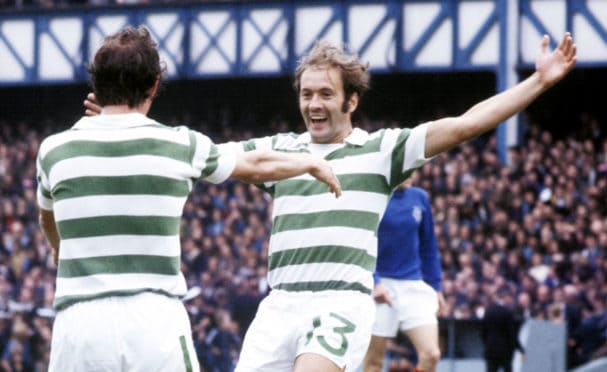 It was with great sadness that I learned of the death of Harry Hood. He was one of my favourites, at a time when I had many favourites and he was certainly one of Celtic’s better goalscorers. Fast, direct and prolific, he was itching to get to Celtic long before he ever got there, and I cannot help feeling that if the McGrory regime had gone for him in 1964, things might have been different.

As it happened, he went to Sunderland instead – that graveyard of many players – returned to Clyde and it was March 1969 before he first donned the Hoops, scoring a vital goal at St Johnstone late in the game to give Celtic a victory.

Of course the competition for the role of the striker was stiff. But Stein knew a good goalscorer when he saw one, and Harry fitted that role to perfection. Several great moments spring to mind. One was the taking of the penalty kick in the replayed final of the Scottish Cup of 1971, another goal in the 1974 Scottish Cup final against Dundee United in 1974, his hat-trick in a League Cup semi-final against Rangers in 1973 – a rare phenomenon – but the best of all was surely the goal in September 1969 at Ibrox which earned us a 1-0 victory over Rangers.

The rain was heavy, the ground was wet, but Harry’s swivel and shot was a thing of exquisite beauty, leading to the birth of the “Hare Krishna” chant – except that the Celtic version ended up with “Harry Hood”. There was also the “We don’t need your Colin Stein, We don’t need your Alan Gilzean, We’ve got someone twice as good, We’ve got Harry Hood!”