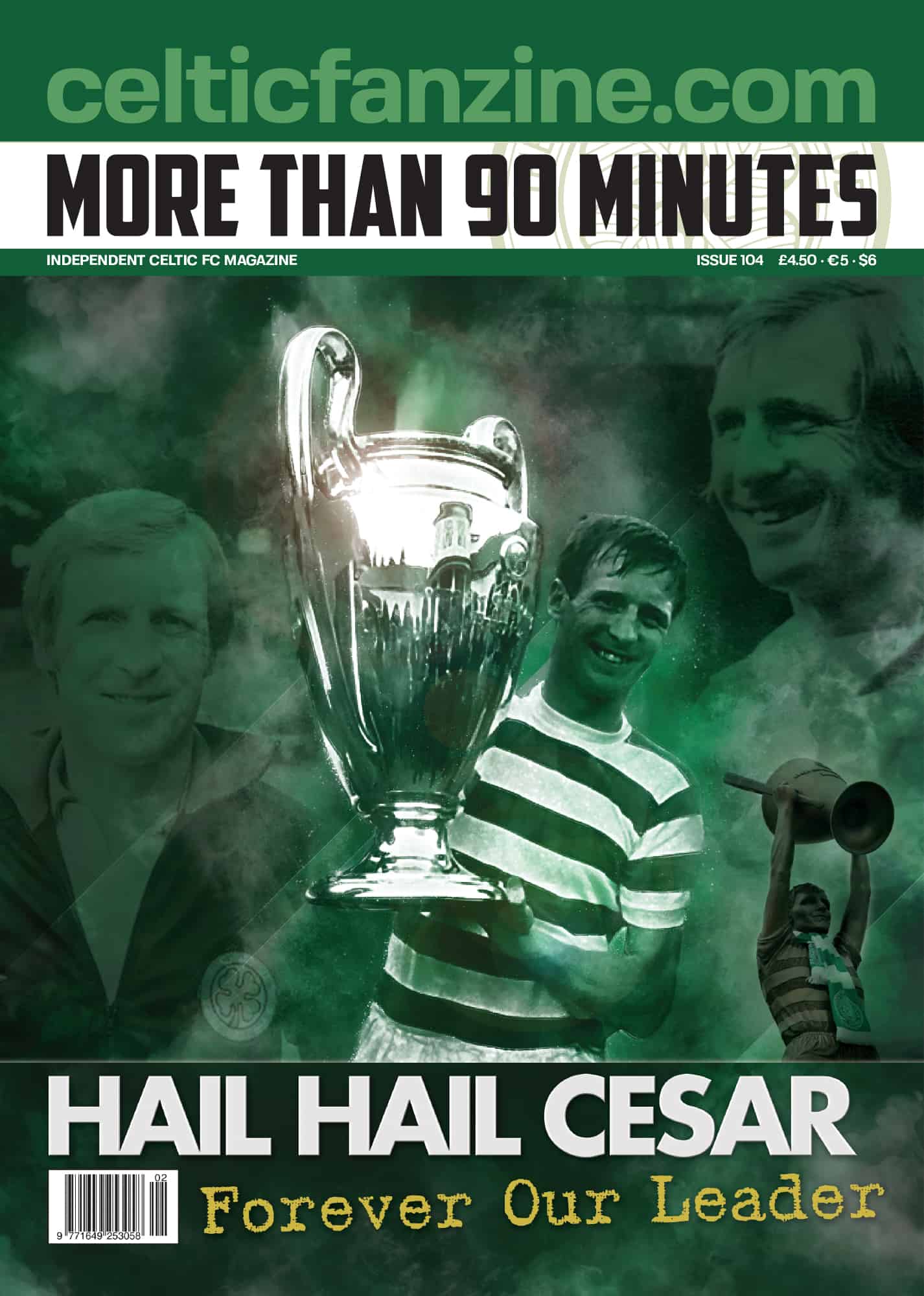 In issue 104 of More than 90 Minutes we pay tribute to Billy McNeill and Stevie Chalmers both heroes of Celtic greatest ever side and conquerors of Europe. Billy graces the front-cover and we have a tribute centre page poster of both Lisbon Lions.

Michael Pringle tells us why Billy McNeill and Stevie Chalmers names will live forever and David Potter pays a tribute to Stevie’s time at Celtic.

Celtic Historian David Potter looks back on our Scottish Cup history v Hearts. He also heralded Frank Murphy as this editions Unsung Heroes and tells us how Billy McNeill started it all off in 1965 and he also pens a piece on the two players Billy kept out of the team. All Our Yesterdays look back at what happened in the month of May over the years.

Lisbon Lion John Fallon looks at Brendan Rodgers departure and the arrival back of Neil Lennon. Dublin journalist Rachel Lynch asks the question where do we go from here? Celtic Minded Author Dr. Joseph Bradley looks at Brendan Rodgers Celtic ‘betrayal’ and reveals just what football means in Scotland. David Potter tells us why we must keep Neil Lennon. Glasgow’s John Molloy tells us How Brendan broke his heart (well almost) and Dublin journalist Eoin Coyne tells us that the End is just the Beginning. Tim Molloy bids Farwell to Brendan and welcomes Neil back in our native tongue.

The editor catches up with Donegal Bhoy & Glasgow based musician Danny Kelly to discuss Football and Music.

Paddy McMenamin once again tells is of recent travels and shares many memories from over the years about Paradise, Rangers, Donegal and Cesar.

Dublin based Shamrock Rovers & Celtic fan Jason Maloney looks back in his own unique way at his experiences of the May Madness 20 years ago in 1999 when Rangers won the league at Celtic Park and Hugh Dallas got new windows.

Glasgow Journalist Michael Pringle is at the theatre to review Bend it like Brattbakk for us. Celtic fan Martin Donaldson reviews our annual dinner at the No. 10 hotel in Glasgow where our Editor was in conversation with fans favourite Alan Thompson. Declan McConville reviews An Evening with John Hartson at Malone’s when our Editor was once again In Conversation with a Hoops Hero.

Football Memories, Celtic FC Foundation and the Kano Foundation are all featured in the current edition.

Player of the Year

Our team of contributors’ nominate their Celtic player of the year.