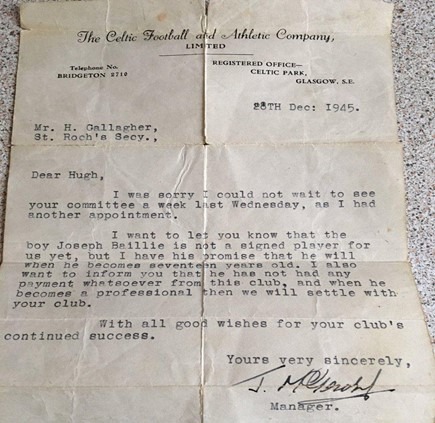 Celtic completed the signing of Joseph Baillie in December 1945. Joining from local junior club St Roch’s, he was a 16-year-old, who would have to wait until well after his 17th birthday to be handed his debut. That moment arrived on 14 September 1946 in a 3-1 league defeat at Queen of the South. It was the defender’s first of over 150 appearances for the Hoops. Although, it was to be another 18 months before he was to force his way back into the team for a second game.

After being given a second bite at the cherry, Baillie slowly began to establish himself as a first team regular at left-half and he forged a strong defensive partnership with the great Bobby Evans.

WWII had been a very bleak epoch in Celtic’s history and that malaise continued in the immediate post-war years. Indeed, it took until 1951 for the club to win a major trophy, their first since the league title and Empire Exhibition triumphs in 1938.

That 1951 Cup winning team had some superb players and Joe Baillie played an admirable part in the success. The legendary John McPhail scored the winning goal in front of 132,000 fans at Hampden Park (Celtic 1-0 Motherwell). In doing so, McPhail stole the show, but he was just one of many Celtic greats in the line-up that day: Hunter, Fallon, Rollo, Evans, Boden, Baillie, Weir, Collins, McPhail, Peacock, Tully. 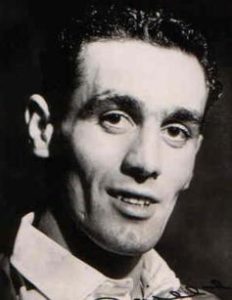 Hunter made a miracle save in the second half of the final. Sean Fallon is an undisputed Celtic legend, as is Evans, Collins, McPhail, Peacock and Tully. Alex Rollo starred in the Coronation Cup triumph in 1953 and Alec Boden made his mark on Celtic history as a scout, in 1967, when he spotted Kenny Dalglish. Meanwhile, Jock Weir scored a hat-trick on the final day of the 1947/48 season at Dundee to prevent Celtic from being relegated.

Therefore, Baillie had good company and wrote his name in Celtic folklore by playing a part in that success to end the barren years. Yet little is known of him.

Joseph had put in some strong performances on the left flank to help Celtic battle to the Final. Then, in that tense match, it was he who broke up a dangerous Motherwell attack and released McPhail with a long sweeping ball. McPhail accepted the gift and lobbed the ball over the on rushing keeper to score.

A few months later, Baillie was part of the Celtic team that won the St Mungo Cup – a competition organised to mark the Festival of Britain – by defeating Aberdeen 2-1 at Hampden on 1 August. This delivered some minor silverware, adding to the few competitions such as the Glasgow Cup and Victory in Europe Cup that Celtic had won in 1940 and 1946.

Those few months in 1951 were the peak of Joseph Baillie’s Celtic career. The enjoyment of that period was perhaps capped when he scored his only goal for the club at the beginning of the 1951/52 season. That came in a 4-1 win over Forfar in the League Cup, with Baillie scoring from a corner.

His regular run in the first team came to an end after a 0-0 draw with Airdrie in November 1952, as he pulled out during the match with a torn ligament injury. Thereafter, Baillie fell out of contention. He didn’t feature in the Coronation Cup victory of 1953, but there were fleeting moment of joy such as the historic double winning 1953/54 season. He may only have played a small part in that campaign, featuring in just two games (one of which was a 2-0 League loss at Hamilton), but it was still a joyous time to be at Celtic and to deliver to the clubs first double for 40 years, and first league title for 16.

On that high note, Baillie’s Celtic story ended as he moved south to Wolverhampton Wanderers in the summer of 1954. A lack of honours should not disguise the fact that Joe was a fine player, who was unlucky to be involved in the club during its bleakest moment in history with the board interfering in team selection. It should also be noted that towards the end of his time at Celtic Park, he combined his playing career with long shifts down the mines at Twechar. This was something that was in his blood as he had already served as a Bevin Boy during the War effort.

After retiring from the game, Joe Baillie’s name resurfaced in the press in tragic circumstances. He had lost his life at the tender age of 37, after crashing his car into the River Kelvin in March of 1966.

News of his passing was reported by the Glasgow Herald in the following way:

The body of a former Celtic footballer was recovered from the river Kelvin yesterday after his car had crashed through the parapet of a bridge in Skaethorn Road, Maryhill, Glasgow, the previous night.

He was Joseph Baillie, aged about 36, a married man with two of a family, of 2241 Great Western Road, Glasgow.

Mr Bailey’s car, which had crashed through the bridge parapet, was discovered hanging over a 30ft, drop into the river at 9.40 on Tuesday night. An all-night search of the river took place after it was discovered he had not returned home, and the body was discovered in eight feet of water yesterday morning by Mr Ben Parsonage, of Glasgow Humane Society.

Police are puzzled by the fact that the car doors on the side exposed to the drop into the river were shut, but it is believed that they may have been blown shut by the high wind. The engine and windscreen wipers of the car were still running when it was discovered by a passer-by, who notified the police.

A police appeal has been issued anyone who may have witnessed the accident, or can supply any information, to come forward.

It was never discovered as to what caused this incident.