The Tragic End of Sunny Jim 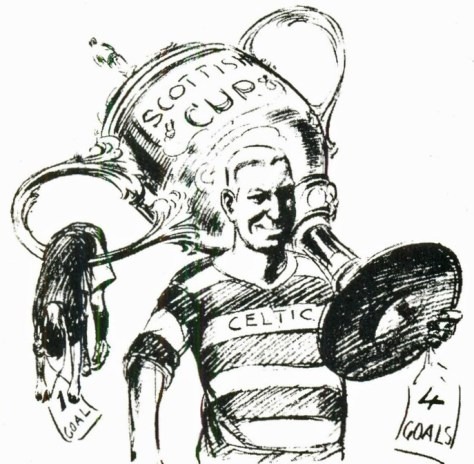 It is almost a hundred years ago, but the end of Sunny Jim Young remains one of Celtic’s saddest days. Sunny, a fair haired right half and latterly captain of the team had played for the club from 1903 to 1916, during which time the club had won an unprecedented amount of honours, and were at times, quite correctly, considered to be the greatest team on earth.

The Bhoys Are Back in Town T-Shirt |Black (Pre-Order)

Sunny had sustained a bad knee injury in late September 1916 and had eventually been compelled to retire from the game. He had then worked in an iron turning works in the munitions industry in Kilmarnock until the end of the war, when he formed a partnership with his old friend (and man of many clubs including Celtic, Bobby Templeton) to run the Royal Hotel in Duke Street, Kilmarnock. Very sadly, a year later in November 1919, Templeton died suddenly of a heart seizure at the age of 39, and Sunny was left in charge.

It was a job he did well, though. He was sociable and cheerful, always willing to regale his customers with tales of Willie Maley, Patsy Gallacher, Jimmy McMenemy and his playing career, and even though he now walked with a permanent limp, that did not prevent him being the ideal “mine host” with always a special word for the many war wounded and emotionally damaged veterans who were in a far worse state than he was. He was a popular man about town, addressed everyone by name and was frequently seen at Rugby Park or Celtic Park.

On Monday 4 September 1922 two of his friends from Darvel, a few miles away, Joseph Deans and Andrew Shearer appeared in the pub and invited him to come with them to do some rabbit shooting at a spot near Darvel. They had just been in town buying some ammunition, and the invitation was a tempting one. Sunny was a good shot.

Making arrangements for someone to run the bar for the rest of the day, Sunny agreed to go. Very few people in 1922 owned a motorcar, but Deans had a motorcycle and sidecar. Sunny was offered the chance to go in the sidecar, but said he’d prefer to travel on the pillion behind Deans, allowing Shearer to travel in the sidecar.

They were travelling along the road to Darvel and reached the Wellington Bridge between Kilmarnock and Hurlford at about 2.00 pm. At this spot the road narrowed. Possibly they were travelling a little too fast (it is possible that Deans may have had a drink at Sunny’s pub before he left, although there was no charge to this effect, and indeed the court of inquiry three weeks later decreed that it was a total accident) and maybe the driver of the Kilmarnock Corporation tramcar heading to Kilmarnock was similarly travelling too fast, but for whatever reason, they collided.

Deans claimed he was trying to avoid other traffic and did not see the tramcar until it was too late. Shearer in the sidecar was badly shaken, but Deans and Young were thrown off the motorbike. Deans landed in the grass, which cushioned the blow, and his injuries were minimised, but Sunny was less lucky, hitting the hard ground and injuring his head and his chest.

At first the injuries did not seem to be too serious. Sunny was stunned for a spell but when he regained consciousness, he complained of severe pains in his chest. As a precaution, he was taken to Kilmarnock Infirmary, but when his distressed wife Florence came to see him, he was able to reassure her that he would be better by the morning. This was about 4.00 pm, but unfortunately he had sustained some very serious internal injuries in his chest. He soon lost consciousness and passed away shortly after 6.00 pm. before any arrangements could be made for an emergency operation.

The news spread like wildfire throughout Kilmarnock, and very soon, folk had gathered at street corners to console each other and to talk about their loss. Joseph Deans was allowed home to Darvel later than night, but his wife kept quiet about Sunny for some time, until he himself was well enough the hear the awful news. Andrew Shearer had been discharged earlier.

When the news reached Glasgow, there was a certain poignancy about what else was going on that day. Willie Maley had found a young man with prodigious talent (almost as good as Patsy Gallacher) but little self-discipline whom he had decided to sell to Third Lanark. This was Tommy McInally.

The manager of Third Lanark at that time was no less a person than Alec Bennett, right winger of the great Celtic side from 1904 until 1908, and it may be that Maley and Bennett were together discussing business when they heard the news. Both men were very fond of Sunny Jim.

Maley was absolutely shattered by this news. It may be that he had a hankering for Sunny to be his successor, eventually, and indeed occasionally by a Freudian slip, he was known to spell Young’s nickname as “Sonny” rather than “Sunny”. He was a man who did not cope with grief very well (after the death of John Thomson a decade later, he showed clear signs of clinical depression) and it is no coincidence that the fortunes of Celtic took a distinct dip after the events of September 4 1922.

The Evening Times of the following day pays a wholesome tribute to Sunny Jim. It says that “his good qualities were not recognised as they might have been” in a reference to his comparative lack of International caps, (he only earned one full cap for Scotland and five Scottish League caps) and sums up his contribution to Celtic by saying that “surely never was a club better served than Celtic by Sunny Jim”.

The funeral was held on Wednesday 6 September. The service was performed by Andrew Aitken (by sheer coincidence the name of the man from Newcastle United who had kept Sunny out of the Scotland team on so many occasions!) of the Grange United Free Church after the cortege had wound its way from 10 Hill Street where the family now lived. The Kilmarnock Herald has this impressive account of his funeral

“Amidst many manifestations of grief and sorrow, his remains were interred in the New Cemetery, Kilmarnock on Wednesday afternoon. The funeral was public and took place from deceased’s house in Hill Street, It was attended by a large number of relatives and friends, including many prominent business men, and also many noted football players, amongst whom were J McMenemy, P Gallacher, A Bennett, J Dodds and A McNair. Mr Malley the popular director of Celtic Football Club was also present.

The wreaths sent were so many that a special carriage was requisitioned to carry them. The coffin was an oak one. The streets through which the cortege had to pass on its way to the cemetery were densely populated; in fact the whole adult population of the town seemed to have turned out to pay their last tribute of respect to one who for many years had been the darling of the football public.

As the sad procession slowly wended its way through the streets, hats and caps were doffed reverently and one heard expressions of the deepest sorrow and regret that the career of “Sunny Jim” had been brought to an end in such a sad and tragic manner. In addition to the mourners, a large crowd assembled at the graveside, where a short burial service was conducted.”

He was only 40, and he left a wife, Florence (an English lady whom he had met in Bristol when he played for Bristol Rovers) and three children, a boy and two girls. He played a total of 513 games for the club, including the Glasgow Cup and the Glasgow Charity Cup, and won an astonishing total of 29 medals – including 9 Scottish League medals and 6 Scottish Cup ones.

He was one of Celtic’s greatest ever servants and it is a matter of some astonishment that his picture does not appear either at the back of the Lisbon Lions stand or the Jock Stein stand at Celtic Park today.