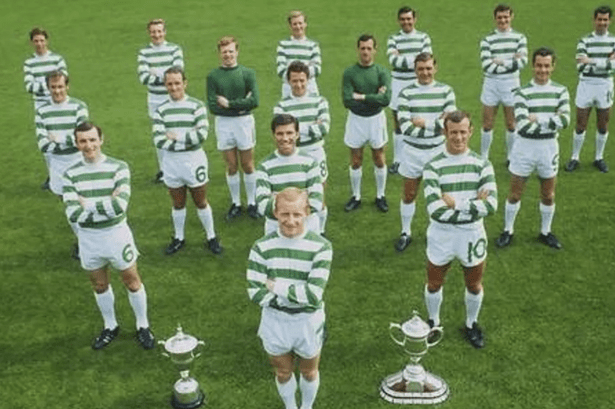 So much was wrote, read and spoken about yesterday about that famous day on May 25th 1967 when Celtic became the kings of Europe. Who knew back then that they would build statues to honour these heroes. They would be remembered in story and song and that so many fans would get a picture with their heroes, some would enjoy a pint with them, while others would enjoy them talking about that night and the great careers they had at supporters functions around the World.

Yesterday from early morning  social media has been a pleasure to flick through with so many great pictures, videos and short stories posted and even the words of some songs lyrics making it on to twitter which was a nice distraction from the constant 24/7 Eddie Howe rumours and half truths as we wait for the new manager to follow in the great Jock Stein who guided that Celtic team to victory in the heat of Lisbon as the song goes.

The new manager will also follow in the footsteps of our fantastic captain on that night Billy McNeill who would go to manage the club he loved twice. I was not born in 1967 but I have had the pleasure to interview many of the players from that famous Lisbon squad. Some were heroes on the day and some were unlucky not to play in the game because of injury or Jock just didn’t fancy them for that particular 90 minutes. To me they are all heroes and were always willing to sit down and chat with me over the years about the Lisbon experience and the careers they had at Celtic.

When I started More than 90 Minutes almost 20 years ago the plan was to tell the journey the team takes us on. The highs and lows through the eyes of the fans, not the mainstream media or even the players but you and me. I remember Alan Thompson telling me about the players road to Seville, amazing as it must have been to be one of the stars of the show that season pulling on the hoops week in week out. I still found myself searching for the fans stories.

Tommy Stevenson was a young Celtic fan of 16 or 17 years of age when he travelled by plane to Lisbon, a stadium he has revisited on occasion and always gets emotional as he thinks back and he did indeed get emotional when I interviewed him in Malones at a pre-match Celtic AM. He was tearful that day as he relived the trip and the emotions felt when the goals went in and when the final whistle sounded. Tommy is like so many who revelled in that away day for ever more.

The first time I met Billy McNeill he was manager of Manchester City, I was in Manchester to box as a teenager. At this stage of my youth I wasn’t a Celtic supporter but it was Coventry City who I supported, not sure why maybe it was because The Specials, one of my favourite bands hailed from there.

Anyway we went to Old Trafford as the boxing team head coach, Christy was a big Man United fan, they let us into the stadium for a look around and then we went into the club shop which was nothing to what superstores we see at grounds these days are . In the small shop a Celtic Flat Cap caught my eye with the crest covering the top of it in green and white and as everything else in the shop was Red as you would expect. I bought the cap as it matched our Green, White and Gold team tracksuits.

We then went to Main Road for a look around, while there they gave us the nod to go to the training ground to see the team train while there we met Billy McNeill and I think Mick McCarthy if memory serves me correct.

Roll on a few years and I am in Glasgow for the first time, again to box on a show, a little older, heavier and the punches seem to hurt a little more but this time we get to go to Celtic Park on the morning of the cup game with Dumbarton, we were invited in by an elderly doorman and shown around the stadium and even allowed into the dressing room where the players kits awaited them. On the way out we once again met Billy McNeill and Mick McCarty. Little did I know back then I would return so often to a city my mother calls your second home.

And little did I know that many years later I would be picking up Billy McNeill and Tommy Gemmell in Dublin airport and sharing a studio with them and my pal, Hilly to talk Celtic on Irish radio. Billy is everything they say about him, I remember watching him in Las Vegas back in 2000 at the Celtic convention before the dinner dance in his Lions blazer looking so sharp as he posed for photo after photo, signed autographs and chatted to each and every fan who came up to shake his hand.

Tommy Gemmell was the first of the Lions I interviewed in the back of a shop in Newry back in 2001 and since then I have been lucky enough to chat to most of them including the sometimes forgotten ones John Fallon, John Hughes, Joe McBride, Charlie Gallagher and Willie O’Neill. You can still bump into Bobby Lennox and Bertie Auld on match days at Celtic Park.

In Sligo on the night before the unveiling of the Brother Walfrid monument I also had the pleasure of meeting Bobby Lennox, Stevie Chalmers and Sean Fallon. I just happen to be staying in the same hotel as them, a stroke of luck and an honour to listen to them talk about that famous night.

Jim Craig surprised me when I interviewed him at Celtic AM in Malones when he spoke not just about his career but of the Celts for Change and the takeover of the club by Fergus and the rebels. I never got to interview John Clarke but was lucky enough to chat to him at the AISCSC dinner in Dublin. I asked him why he never wrote a book, he said it might upset people!

I only got to meet Bobby Murdoch briefly back in Las Vegas in 2000 and sadly I never got to meet wee Jinky but I had the pleasure of interviewing his lovely wife Agnes and I don’t ever recall chatting to Ronnie Simpson which leaves I think only Willie Wallace who I finally got to meet in Las Vegas at the last convention thanks to Jim Reilly from Sydney City CSC for inviting me into their cabana to meet another Lisbon Legend legend.

Some people say you should never meet your heroes but they must have never met the Lisbon Lions.