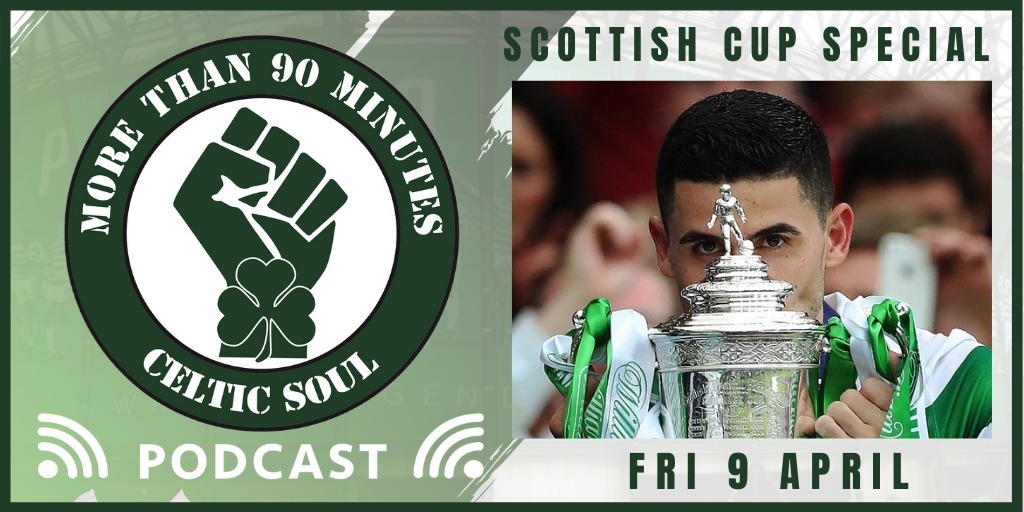 Celtic AM Scottish Cup Special, Andrew returns after a year with the show which differs from the normal Celtic Soul Podcast which was recorded for Celtic Fanzine TV. All is explained in the intro from Andrew.

Celtic historian and author David Potter kicks off the show with a history lesson of Celtic in the Scottish Cup including recounting his own memories from 1965 onwards and he also recalls his father’s stories of famous finals in his time.

Eddie Toner chats to Andrew about how special the Scottish Cup is and his memories include the story behind a man in his thirties dressed in a full kit for the final in 1995 and the celebrations that night when Tommy Burns took the team bus through the Gorbals and the Gallowgate on the way back to Celtic Park.

Rudi Vata recalls being on the bus that day with two special Celtic fans who lived the dream, Paul McStay and Tommy Burns and how special a day it was for the team and he also goes back to relive that perfect pass in the semi-final when he found Phil O’Donnell for the third goal in a 3-1 win over Hibs to secure victory.

Andrew Milne started More than 90 Minutes in 2001. He has written for numerous publications and online about Celtic.  He is a former newspaper columnist with the Daily Ireland and the man behind celticfanzine.com. He is host of the Celtic Soul Podcast & Celtic AM pre-match events at Malone’s in Glasgow on match days and follows Celtic Home & Away. He is a season ticket holder for Celtic FC and the Republic of Ireland. He is also P.R.O. of St. Margaret’s CSC, a member of the Celtic Trust and the Celtic Graves Association. Twitter @AndrewMilne12