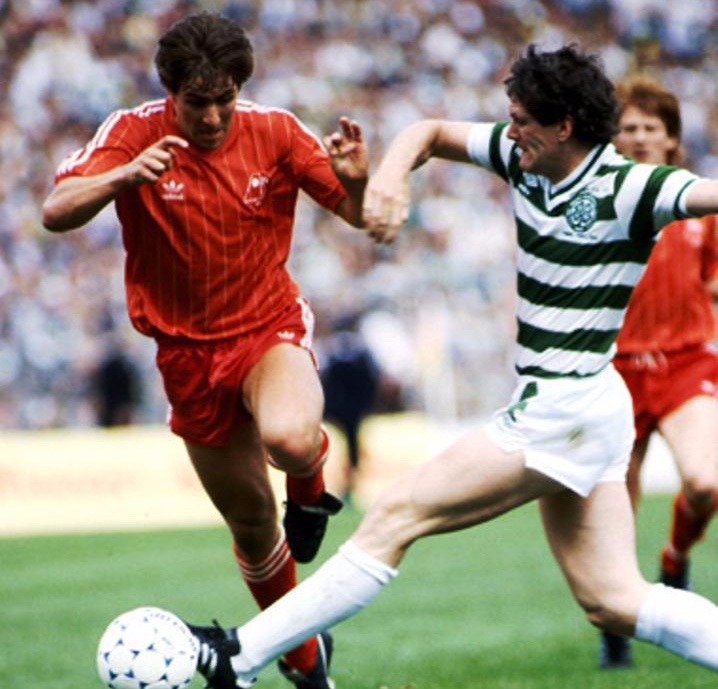 It was the BBC Scotland programme on Lockdown TV on May 15 2020 about Aberdeen that brought it all back. I refer to the Scottish Cup Final of May 19 1984. I recall I took it very badly at the time, and time has not really healed this particular wound.

In 1984, it has to be admitted, Aberdeen were a good side and over the season, better than Celtic. They had deservedly won the Scottish League thanks to a piece of serendipity whereby a good Manager coincided with an oil boom. The city was rich, their Manager knew how to run a football club and knew how to buy well, the Directors supported him and the crowds came back to Pittodrie to see a team which won the Scottish League in 1980 and 1984, the Scottish Cup in 1982 and 1983 and most importantly the European Cup Winners’ Cup in 1983 beating, of all teams, Real Madrid in the final in Gothenburg.

And where were Celtic in 1984? Not so good. The loss of Charlie Nicholas and Billy McNeill in summer 1983 had not really been recovered from, and questions were beginning to be asked about Manager Davie Hay. We had had a poor League Cup final in March, losing to Rangers in extra time in a game dominated by penalties, and we really needed to win the Scottish Cup. There were good players – McGrain, Aitken, Burns, MacLeod and McStay, for example, would hold their own in most footballing circles – but Celtic really needed to bring home the bacon sooner rather than later. The fans were getting edgy, and attendances were beginning to fall. And yet, Celtic were not really a poor side.

The weather was good and hopes were high, possibly unrealistically so, as 60,000 turned up at sunny Hampden. The Celtic parts of the ground were crowded, but there were a few noticeable open spaces at the Aberdeen end. Morning newspapers had favoured Aberdeen, but no-one writes off Celtic on Cup final day. Celtic started kicking off toward their own supporters, and the game was even. The challenges were meaty, as one might expect, but well handled by veteran referee Bob Valentine of Dundee, the very man who had awarded the controversial hand ball penalty for Celtic v Rangers in the Scottish Cup final of 1977, seven years ago.

Aberdeen scored first. TV replays would tend to indicate at least two things wrong with the goal – a push in the build-up and Eric Black, looking just a wee bit offside. But the goal was given, and was not necessarily looked upon as fatal, for it was early enough in the first half, and Celtic were not playing at all badly.

But then came the moment that defined this Cup final. Roy Aitken tackled Mark McGhee. Those who supported Celtic thought a yellow card was sufficient. Those who supported Aberdeen wanted red. Neutral commentator Archie McPherson on BBC TV sided with the yellow brigade, but sadly Mr Valentine, the compositor with DC Thomson in Dundee, flashed a red card. Possibly, he was still irked at being called “Bob Vatican” by the Rangers supporters in 1977, but he made his judgement – and that was what he was paid to do.

What remains still unacceptable (and an awful lot of water has now passed under the bridge!) was the attitude of Mark McGhee and Gordon Strachan. McGhee stayed down – and then recovered to score the extra time winner! And Strachan was nothing other than a despicable little stirrer who played a major part in getting a fellow professional sent off. These two gentlemen, as we know, came to Celtic Park in later years, to play an important, even perhaps a glorious, part in Celtic history. It took me, however, a long time to accept them – and I was not the only one. Even more ironically, Roy Aitken went to Aberdeen, became their Manager, and oversaw them losing in the Scottish Cup to Stenhousemuir!

But the real heroes in this Cup Final were Celtic. With 10 men, they played some of the best football the fans had seen for years, and with Roy still on board, would surely have won the game comfortably. As it was, the 10 men equalised late in the game through Paul McStay, and had Graeme Sinclair got a little more power behind a shot soon after that, they would surely have won – and deservedly. It would have been the greatest Scottish Cup final triumph of them all – and that is saying something! Willie Miller, Aberdeen’s captain was honest enough to concede that Celtic were good in the second half, and Sunday’s Press more or less unanimously agreed. Celtic have won Scottish Cups playing a lot worse than they did that agonising day of May 19 1984. Extra time however meant that 11 beat 10, and how hard it was to reconcile McGhee’s charge up the field with his arm outstretched and fist clenched in triumph with his apparent serious injury when Aitken had brought him down less than an hour previously!

1984 was a painful summer, but it is, I suppose, now hard to be jealous of Aberdeen whose supporters have had far more than their fair share of heartbreak, particularly at the hands of Celtic. They are, in the main, a decent bunch of people, rightly proud of the Ferguson years, but rightly puzzled about why, in spite of multiple visits to Hampden, they have won only one honour in the 21st century! And that was after a penalty shoot-out against Inverness at, funnily enough, Celtic Park!