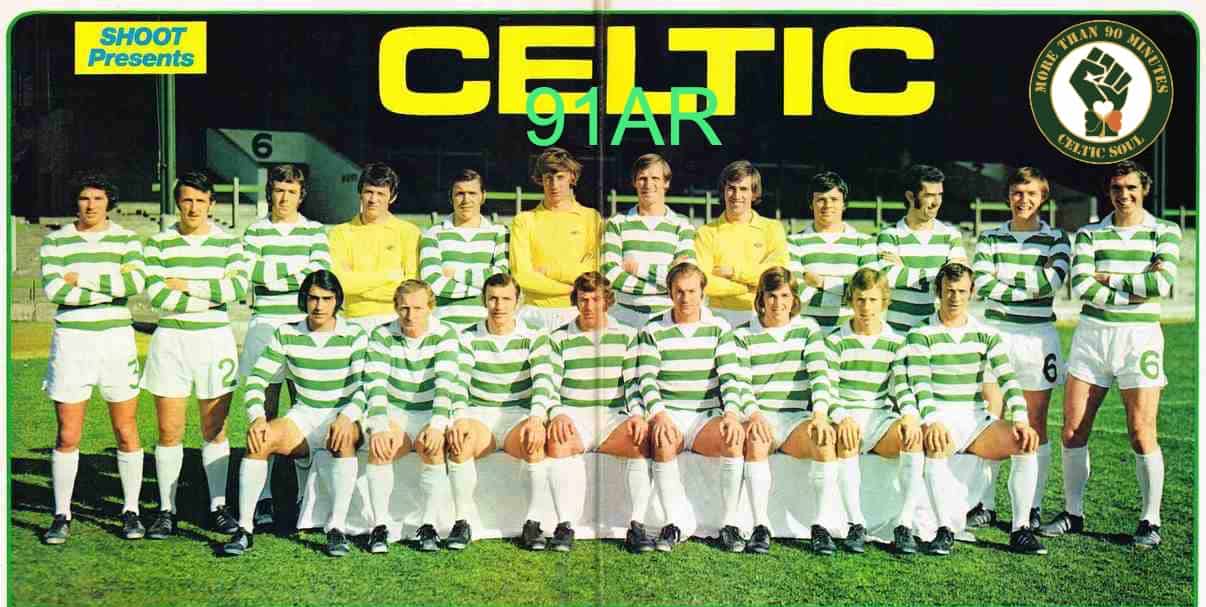 Prior to 1966, the Scottish League and Celtic were hardly on speaking terms! Since the Second World War, the League had been won only in 1954. What was even more disturbing was that only in 1955 were Celtic even second in the Scottish League. In other words, we were never even close! But 1966 changed all that and changed it for ever.

We now went into a phase in which no-one other than Celtic won the League – nine long years of plenty after so many years of famine. And it was all about Jock Stein! A remarkable fact was that not a single one of the nine-in-row was clinched at Celtic Park – Fir Park, Ibrox, Dunfermline, Kilmarnock, Tynecastle, Hampden, Bayview, Easter Road and Brockville – but never Celtic Park, although it would have been Celtic Park in 1971 had Celtic not temporarily been playing at Hampden.

1965-66 Celtic 34-57, Rangers 34-55. A close race, possibly even the closest of the nine with Celtic behind at one point in early 1966 after defeats at Aberdeen, Hearts and Stirling Albion. Things looked bad after losing to Liverpool in the Cup Winners Cup, and then to Rangers in the Scottish Cup final, but the team rallied to beat Morton in the third last game at Cappielow, then Celtic won a very difficult fixture against Dunfermline at Parkhead before finishing it off at Motherwell on May 7.

1966-67 Celtic 34-58, Rangers 34-55. Won at Ibrox in the rain in a 2-2 draw on May 6 in a curious game which saw one spectacular goal and one scrappy one for each side. But Celtic had blown up badly to Dundee United at Parkhead on the Wednesday night (and some of us wondered whether this was all just so that we could win it at Ibrox – we had another game at Kilmarnock in any case) and in fact this race was not as close as it sounds, but full marks to Rangers for staying with the Lisbon Lions for so long!

1967-68 Celtic 34-63, Rangers 34-61. Phew! The tightest race of them all, and a tribute to the magical powers of Jock Stein who could take points off Rangers, even when Celtic were not playing them! Celtic looked down and out after they could only draw to Rangers at Parkhead at the New Year. Two points behind, and no other chance to play Rangers! But enter Stein and the mind games. Celtic started to play some brilliant football, and somehow or other in the face of it, Rangers creaked, creaked and eventually cracked. A point dropped at Dundee United, another at Morton, a cowardly withdrawal from the Glasgow Cup which won them few friends (they were afraid of Celtic!), and then on the last day, insisting on playing their game in opposition to the Scottish Cup final. And they blew up against Aberdeen! Celtic then went to Dunfermline on the Wednesday night, more or less Champions unless they lost 16-0, and in front of a huge crowd duly won 2-1.

1968-69 Celtic 34 – 54, Rangers 34 – 49. In spite of losing both games to Rangers, Celtic emerged triumphant as the more consistent side throughout the season. Celtic had a lot of other commitments this season, winning a domestic treble and going down to AC Milan in the European Cup quarter final, but won the League on Tuesday April 22 when Rangers lost to Dundee at Dens Park.

1969-70 Celtic 34 – 57, Rangers 34 – 45.  The easiest win of the lot. The League was won as early as March 28 with a 0-0 draw at Tynecastle, allowing Celtic time to concentrate on other matters. Rangers were at sixes and sevens throughout the season, sacked Davie White as manager and appointed Willie Waddell, but were never close to challenging Celtic

1970-71 Celtic 34- 56, Aberdeen 34-54. For a change it was Eddie Turnbull’s Aberdeen who challenged Celtic this year, but Celtic drew the key game 1-1 at Pittodrie on April 17, and eventually won the League on April 29 when they beat Ayr United at Hampden. This was a new emerging Celtic side, following the major disappointment of losing last season’s European Cup final to Feyenoord.

1971-72 Celtic 34-60, Aberdeen 34-50. Again Aberdeen chased hard, until they made the astonishing decision in February when they were still in the race, to sell Martin Buchan to Manchester United! It was like Winston Churchill selling the spitfires in the middle of the Battle of Britain! Celtic could hardly believe their luck, and won their 7th title on April 15th at Methil against East Fife. Celtic had now surpassed the achievement of their Edwardian predecessors who “only” managed six League Championships in a row.

1972-73 Celtic 34-57, Rangers 34-56. Close! A strong Rangers team fought hard this season, and Celtic were a little off the boil, particularly in midwinter. It all came down to the last day of the League season at Easter Road, but Celtic won 3-0 against a strong Hibs team to win the League for the 8th year in a row. It was a hard-working and determined, rather than a brilliant Celtic side.

1973-74 Celtic 34-53, Hibs 34-49. A strange season with games played on Sundays for the first time ever, but Celtic won fairly easily by four points over Hibs who challenged well all season. The League was won at Brockville with a game or two to spare, but again it was admitted that Celtic were not as good as they had been in the past, and a strong challenge might cause them problems. But they had established themselves as the “natural” champions of Scotland, and had created the agreeable habit of psyching out opponents, including Rangers!

Season 1974/75 was in every sense an ugly season. It was an age of dreadful fashions in clothes, ubiquitous straggly long unkempt hair, inflation getting out of control, normally docile people like teachers and dustbin men on strike, and a Celtic team that could only be described as “ordinary” (even though they did win back some pride by capturing the two domestic trophies. Nevertheless they exited Europe meekly in October, and as early as January it was apparent that the League challenge was evaporating. A 3-0 defeat at Ibrox told its own story, and it was followed by a dreadful 3-2 defeat at Parkhead by Motherwell, and there was no way back after that.

Only three players could be said to have played regularly in all nine seasons – Billy McNeill, Bobby Lennox and Jimmy Johnstone. It was a wonderful achievement.