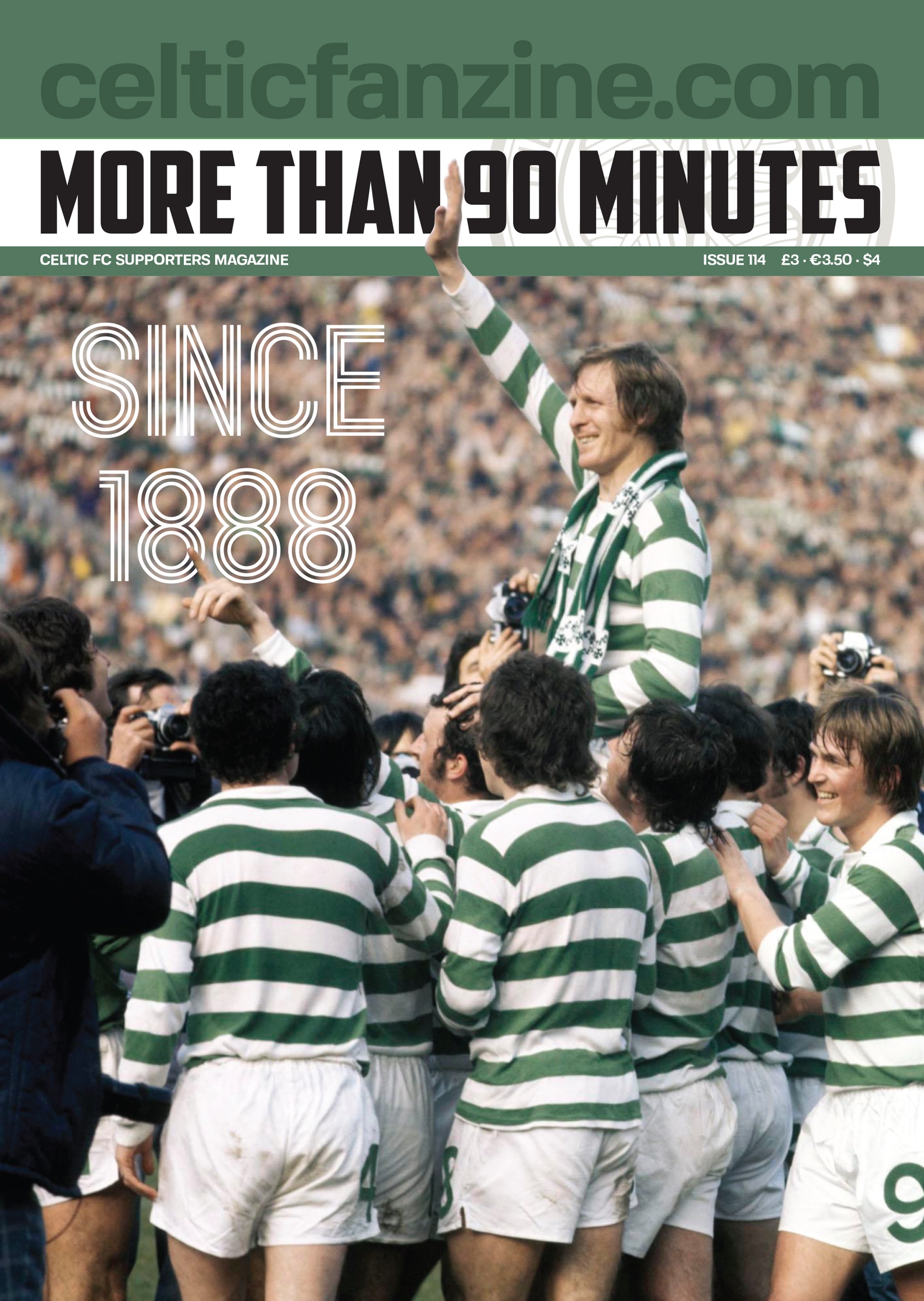 More than 90 Minutes Issue 114 digital is now available to downlaod and read. The print edition will be available on Monday pre-order details are at bottom of page.

Download the latest edition of the fanzine for a bit of quality weekend Celtic reading. We promise more than just headlines or articles cut and pasted from the Sun & the Record. Click link below to buy, thank you for supporting Independent Celtic Fan Media.

Who better than Billy McNeill to grace the cover of issue 114 of More than 90 Minutes as we celebrate our unbroken history, two x 9IAR and a Quadtruple Treble while our 9 year old neighbours struggle to understand basic Maths. Billy won more in one month than the Newco have won in 9 years. History, Maths and Social Distance Studies need to be explained to the Newco Fans.

Scoby returns with his pencil to conduct an Art lesson to the Newco also, while we look back at the last month with Neil Lennon’s departure and how nothing seems to have changed in the players mentality under caretaker boss, John Kennedy. Can we kick start the fightback on Sunday and build on a good performance and go on a Scottish Cup run all the way to Hampden?

The Editor looks back at the past month or so and voices concerns about the current state of play at Celtic. Bhoys Ultras feature in Snap while World Thai Boxing Champion, Daniel McGowan and former Celtic player, Didier Agathe join Mick Kane and Scotty Alcroft in conversation.

Jeanette Findlay from the Celtic Trust explains if we share the pain we will share the gain after the Trust’s proposal to Celtic PLC to make all season book holders shareholders. The original Celtic Holy Goalie, John Fallon returns with his no holds barred take on all things Celtic.

David Potter looks at Billy McNeill’s legacy and also looks back on the remarkable Celtic career of William “Peter”McGonagle. He writes about our first post-war trophy while Potters Player this month is Bobby Hogg.

Liam Kelly writes about Nazi leader, Rudolf Hess when he crash landed in Scotland during World War 2 and the song which became subject to a Celtic fans anthem. In GOAL! Martin Donaldson looks back to Celtic Park on the 23rd of April 1988 when Chris Morris opened the scoring in a 3-0 win over Dundee to crown Celtic champions in the Centenary season.

Paddy McMenamin looks back at the career of the Mighty Atom, Patsy Gallacher and his connections to Ramelton, Golan and Milford. Ciaran Kenny is longing for a European Huddle as he looks back at Stuttgart away in 2003.

To Pre-Order the Print Edition click link below and we will stick it in the post on Monday evening when it arrives from the Printers.