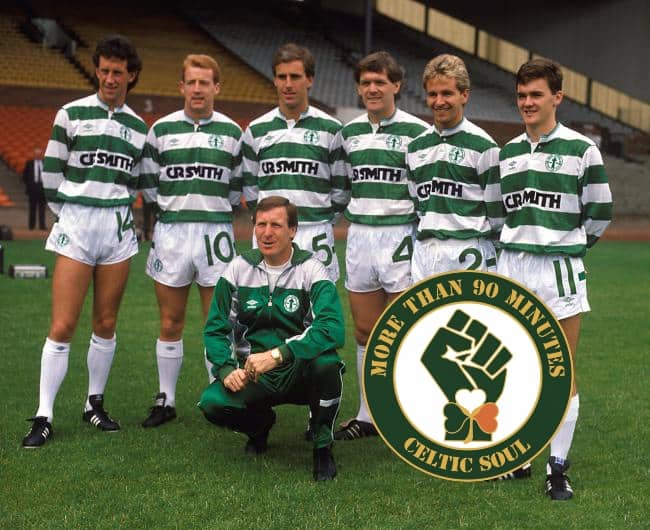 Before I pay tribute to Billy McNeill on the anniversary of when he delivered the Scottish League in our Centenary Season 32 years ago and a day after the anniversary of his passing. I would like to extend my condolences to the McNeill and McCombe family who are mourning the recent loss of Billy’s grandson Matthew.

This morning and all day yesterday a quick look at social media reminded me of how loved and respected Billy was by the Celtic fans. There are lovely tributes and some cracking photos with Billy and I look forward to reading more tributes to Billy from his former team mates and those who played under him during both his stints as manager and especially the stories getting shared by Celtic fans over the next few days.

I was lucky enough to meet Billy on a number of occasions. If memory serves me right I first met him when he was Man City manager in the mid- eighties when I was a young teenager and part of a boxing team taking part in a tournament over there.

I would later meet him again in the late-eighties when once again I was boxing, this time in Glasgow. He always had time for the fans.

The first time I got to have a conversation with him was at a drinks reception at the NAFCSC gala dinner in Las Vegas back in 2000 and over the the years he would be a regular at the convention and I was lucky enough to spend a week in his company at a convention in Windsor Canada where we were entertained by a young Kevin Bridges.

In 2009 I had the pleasure of picking BIlly and Tommy Gemmell up at Dublin Airport and taking them to LMFM radio station for an Interview, before lunch in Scholars Hotel in Drogheda.

That night they were in Duleek as guests of St. Margaret’s CSC and the following day they shared their memories with us at a lunch in Drogheda.

The lunch was held upstairs in Tommy Hanrattys bar which is spitting distance from my house and I passed the pub while out walking the dog early this morning, the name of the bar has changed but the memories from that day will be treasured by all who were lucky enough to attend.

A year ago when the news broke that Billy had sadly passed away I was so glad that we had so many platforms of media available to enjoy the legacy and greatness of King Billy as tributes flooded in.

On TV last year after his sad passing we had tributes from his teammates, opponents, fans and the players who he had managed. Every emotion was expressed, John Clarke was hurting when he spoke, Charlie Nicholas was tearful and Bertie Auld broke into song.

On radio, along with tributes, old interviews with Billy were revisited, in the Newspapers tributes were paid by journalists, in the days and weeks that followed the mainstream football publications and the Celtic fanzines all paid tribute as did the online bloggers from various fan websites who contributed many words as they paid their own tributes.

Billy lifting trophies, scoring goals, managing winning Celtic teams and interviews were all plucked from the vaults of YouTube and shared on all social media platforms

Social Media also gave everybody from the Celtic family and beyond including numerous football clubs a chance to pay homage to this giant of a man.

Facebook gave everybody an opportunity to share a picture and story of when they met Billy among all their friends. To me these were special and showed just how many supporters functions Billy had attended and how close he was to the ordinary fan on the street. He lived our dreams and made those dreams come true on so many occasions.

Over the years I have had the pleasure of interviewing many of the players who played with him and also those who played for him. At recent Celtic AM events in Malone’s strikers Frank McAvennie, Joe Miller and Frank McGarvie all spoke about their former Gaffer.

Billy may have been a Legend and a Celtic Icon but he was also a husband, a father and a grandfather and it cannot have been easy for those closest to him to see him suffer from Dementia.

To the Celtic family he was everything rolled into one, the player who would play for nobody else but his beloved Celtic, joining the club in 1958 and retiring from football and the Hoops jersey in 1975. He was our 9IAR captain who would conquer Europe and all before him in Scotland.

He was our manager, guiding the team to a dramatic 4-2 win with 10 men to clinch the league, he was the returning Leader to lead us to a Centenary double, he was the Ambassador a true footballing statesman.

His statue on the Celtic Way at the stadium will be an everlasting reminder of what he achieved at Celtic for generations to come and soon the locals of Bellshill will also have a statue to remind them of their local hero who would conquer Europe.