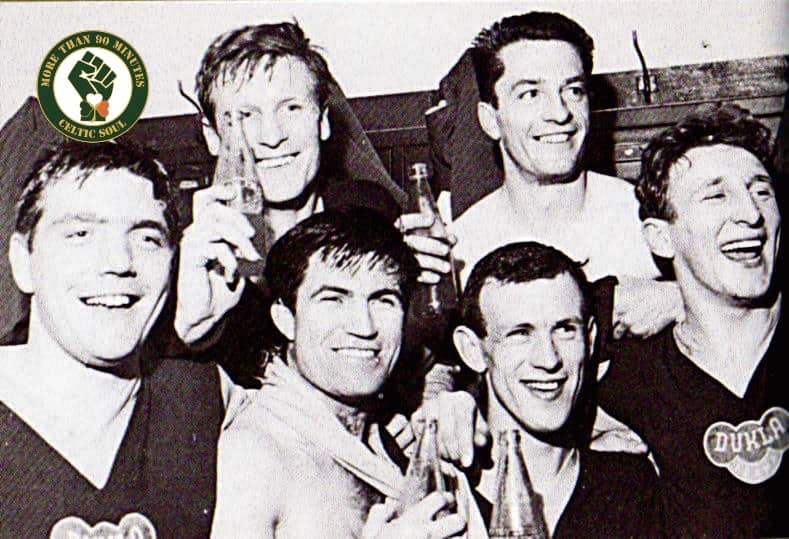 Goalless draws are not, by their nature, usually great events. They are usually accompanied by jeers, catcalls and “we’re no’ comin’ back”. Fans feel cheated. Football is, after all, about scoring goals. “Nae goals, nae fitba!”

There are however exceptions. One egregious example of this was April 25 1967, a Tuesday night in Prague with a tea-time kick-off, the semi-final of the European Cup. Celtic were 3-1 up from Glasgow less than a fortnight before against the Czechoslovak army side Dukla Prague, and it was generally expected that Celtic would manage to get through to become the first British side ever to contest a European Cup final. However, it was no exaggeration to say – in fact it was a banal cliché to say –  that the stakes were high.

Very few Celtic fans went with the team to this funny ground which had trees and bushes growing halfway up the terracing. The weather was cold. It was dry and even a little bit sunny, but spring sometimes takes a long time to arrive in central Europe, and it was still freezing. The eleven that took the field for Celtic that night were the same eleven that would do the job in the final – although everyone was so aware that it all depended on what happened on the night.

The game kicked off at 4.30 pm Scottish time, and there was a radio broadcast of the second half from 5.25 onwards, followed by a BBC television programme of the highlights at 6.17 pm (of all times!) immediately after the final whistle. Douglas Lowe, as I recall, was the radio commentator (although it may have been Alistair Alexander or even Archie McPherson) and the Englishman Kenneth Wolstenholme did the TV, an indication of how important this was in the context of British football. Kenneth Wolstenholme was, of course, an unrepentant admirer of Celtic (and had been since the Empire Exhibition Trophy of 1938), even though he was often shabbily treated and sneered at in Scotland, not least by Stein himself. But tonight Celtic’s moment was to be shared throughout the British Isles.

Your writer was a first year student at St Andrews University. St Andrews University is a lovely place and the University was rightly famed for Classical languages, philosophy, golf, red gowns and a somewhat bloody history in which Protestants and Catholics did an awful lot of fighting, throat cutting and burning of each other at the stake for no apparent purpose. Today however, one could not concentrate on Homer’s Iliad or Euripides Medea, one could not even drink coffee, and chatting up all these pretty girls with neurotic tendencies, mini-skirts and who said “Yah!” and “Super” all the time,  was simply out of the question. It was all about getting through to the final of the European Cup! Nothing else really mattered.

A friend of mine, well disposed to Celtic (as indeed most students, even the English ones, were) who played football for East Fife invited us to his room to listen to his transistor radio. We joined the game when it was still 0-0 at half time with a few clichés about “defending valiantly” “a strong Czech side” and “so far so good”. I recall being disappointed that John Hughes wasn’t playing because I felt that he was the sort of chap who could run and score a goal out of nothing.

As it turned out, Steve Chalmers was the only man playing up front. The other ten were defending grimly. Some say these were the tactics of Jock Stein, some of the players later said that they had no choice for this was a fine team they were up against.

One could not say that it was easy to listen to this second half as we counted the minutes down. We heard strange things like “Lennox heading the ball clear out of his own penalty box” “up pops Johnstone to rob the forward as he was about to shoot” and even more strangely “McNeill belting the ball up the field to no-one in particular”. It was tense desperate stuff, but there were also times when ball players like Murdoch and Auld passed the ball about sensibly to each other, while Steve Chalmers ran himself into the ground chasing any ball that crossed the halfway line. Now and gain Lennox or Johnstone crossed the halfway line with the ball – but it didn’t last long.

Bladders and bowels were under pressure, and frequent visits to the toilet were necessary. Latterly we were like caged lions pacing up and down the floor threatening to wear away already threadbare carpets. Sitting down was impossible. This was stress! Twice I found my knees giving way under me. Once was when the commentator’s voice rose as a Czech forward shot – “but over the bar, he sends it”, and the other was when Bobby Murdoch brought someone down in the penalty box – “but no penalty, says the Swiss referee”.

Ten minutes to go, and I began to permit myself the thought that the Czechs would have to score two in ten minutes. They couldn’t do that, surely! But we still counted the minutes down. “McNeill mops up once again”, and then came injury time. We would surely do it now! “…and there goes the referee’s whistle!” Relief, collapsing over a chair, sobbing, cheering, even me saying things like “I knew we would do it!” (Did I hell!) and then along to the TV room to watch the highlights and the interviews. Now we were relaxed and confident, able to eat and, naturally, to drink beer.

An hour or so later, someone phoned me. That in 1967 was usually bad news – an illness, a bereavement, or the girlfriend saying it was all over – not tonight though! It was my chortling, virtually incoherent father saying “What a night!” He almost at one point said that they were better than Patsy Gallacher – but couldn’t quite bring himself to such blasphemy. They were almost as good though. Father and son sobbing over the phone – and this was the man who used to say things like “It’s just a fitba match!”

The team were back in Glasgow by midnight. They had the Scottish Cup final on Saturday against Aberdeen to think about. Jim Craig had taken ill with a chill, possibly flu, and had to “self isolate” near the back of the plane. He recovered though and played a glorious part in the 2-0 win over Aberdeen. I performed almost as meritoriously myself on the East Terracing. It was a great time to be alive, and of course, we weren’t finished yet!