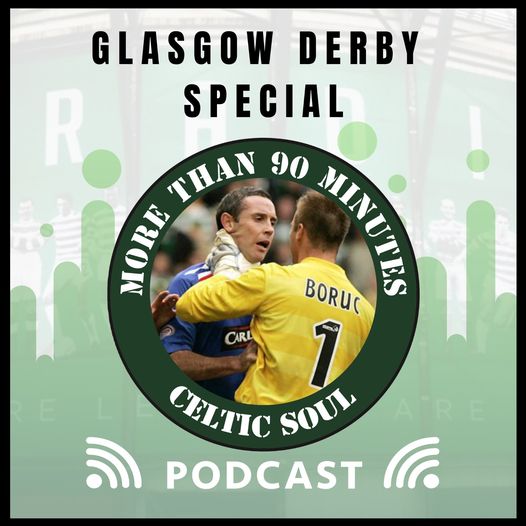 Celtic Soul Podcast Episode 63 with More than 90 Minutes, Editor Andrew Milne chatting to Scott McDonald and Ciaran Kenny on the Celtic AM Glasgow Derby Special. David Potter looks at the history of the local derby and some Celtic Fans share their favourite Glasgow memories.

Scott relives his time playing in the derby, scoring at Ibrox, where he also watched the games as a fan and lifting the League Cup Trophy at Hampden after Darren O’Dea and Aiden McGeady scored in extra time. Scott also pays tribute to Tommy Burns and recounts him losing the head in the Ibrox dressing room after a defeat when he told the players in no uncertain terms what the game means to him and the Celtic fans.

Ciaran Kenny chats about his many bus trips from Dublin to Glasgow to face the Oldco and the Newco including the highs and lows associated with the game.

David Potter recounts the history of the games and when the rivalry started between both clubs and looks back at many battles on the pitch against the blue half of Glasgow,

Celtic Fans young and old from around the globe share some of their favourite moments and memories.