Home / News / Celtic My First My Favourite with Simon Weir

Celtic My First My Favourite with Simon Weir 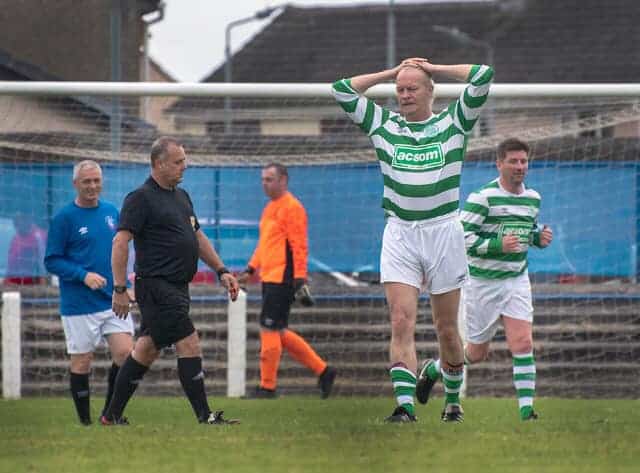 First Game : 12th February 1983. Eric Black broke my 10 year old heart, scoring a hat-trick in a 1-3 loss to Aberdeen. The crowd was huge as I ascended the steps of the old main stand at Parkhead, holding my dad’s hand, the smell of cigar smoke and Bovril in the cold wintry air. I clearly remember my eyes widening unblinkingly as I took in the massive expanse of the green pitch and the roar as the Celts ran out for the warm-up.

We got right down the front, we were touching distance to Charlie Nicholas, Davie Provan and Paul McStay firing the ball around in triangles near the touchline. Before kick-off a girl ran on to the pitch and ran up to Charlie and kissed him before legging it as the Celtic fans cheered. ‘That’s it…I’m gonna be a footballer’ I thought to myself…Nicholas scored a belter to put us one-up and we stood most of the match as Aberdeen’s Black destroyed our hopes that day but I remember Charlie Nicholas doing keepie-uppies with one boot on and one in his hand as he swivelled round to narrowly miss Leighton’s top corner. I still have the programme! (see photo attached)

Favourite game: 1985 Scottish Cup Final. I’d been to the 1984 final & watched again as Eric Black of Aberdeen ended the dream. This time my favourite player Davie Provan scored an unbelievable direct free-kick past Hamish McAlpine. The commentary by Archie MacPherson stated “Is this a bit of history…IT IS!’ as the tango football sailed into the net…Still my favourite goal of all time. Even better to come was Roy Aitken’s in-swinging cross and the almost despairing leap of Frank McGarvey in a proper cup-winning goal, the ball swerving in the air as he fell flat & the crowd erupting in the biggest roar I had ever heard. Dundee United were a great team and looked the more likely having gone a goal ahead but thankfully their ‘Hampden Hoodoo’ continued on that marvellous day in May! And to top it all off, it was the 100th SFA Final…as Archie said ‘A bit of history’. Sadly the team broke up soon after, Frank being given a transfer on the following Monday and Davie out through an illness that wrecked his World Cup dreams and finished his career. But it will forever be the most amazing day in my life as a Celtic fan, even surpassing the 6-2 win over Rangers that I was also privileged to attend! Hail Hail.

Simon Weir is a Scottish actor. Simon has appeared in Take the High Road, River City, The Acid House, Trian Spotting 2 and Monarch of the Glen. When he is on not on stage or screen you will find him at Third Lanarks old ground Cathkin Park in Glasgow restoring the old darling back to its former glory.