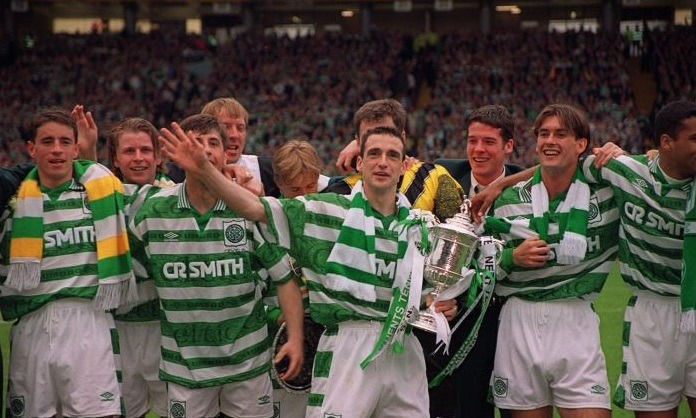 A pair of brothers winning Scottish Cup medals is no unusual. When they do it three times, it becomes rather noticeable, and when sixty years later, their great-nephews do the same thing, then everyone really has to sit up and take notice. But this is only one of the remarkable achievements of the McStay dynasty.

Sometimes called “the tank” (he had served in the Great War) because of his rugged defending, Willie McStay senior (sometimes written McStey in newspaper reports and certainly pronounced by the fans as if it rhymed with the vowel in “mighty”, hence the frequent headlines of “mighty McStey”) was equally at home anywhere in the defence – right back, left back, right half or centre half, although he always said that left back was his favourite position. He was also an inspirational captain, a brilliant tactician and a reliable taker of penalty kicks.

He made his debut on the opening day of the 1916/17 season and held his place in that very fine side which lost only on the penultimate League game and conceded only 19 goals all season – something that did a great deal to cheer supporters up in the face of grim news elsewhere. He then took part in the latter stages of the war, but came back in time to win a Scottish League medal in 1919/20 and to dominate Celtic’s defence throughout the decade of the 1920s.

While other players like Gilchrist, Cassidy, Cringan and McInally threw tantrums and caused trouble, McStay remained like a rock to rally players and supporters. He was not immune to disaffection, however, nor the “insidious effects of socialism”, and history has not been kind to him in terms of why he was not in the team that lost the Glasgow Charity Cup semi final against Rangers in 1923. (He was apparently in the USA considering a career there.) But fortunately, he returned to Celtic.

An intelligent and well-read, gentle, urbane man, Willie realised in 1925 that Rangers were a better team, but before the famous semi final, concocted with Patsy Gallacher the plan that defeated them 5-0, withdrawing totally into defence for the first half of the game and then hitting them hard in the second. He had the ability to nurture young vulnerable players like Connolly, Thomson and McGrory, and it is difficult to overstate Willie’s contribution to the cause throughout the difficult decade of the 1920s.

He played equally well for Scotland, latterly as captain. He played in the side that beat England 2-0 at Hampden in 1925 when Scotland won the treble, and was captain a year later when they won 1-0 at Manchester. In 1927, however, he made the tactless remark about how Scotland’s defeat was all due to his full back partner Bob Thomson of Falkirk – something that Falkirk people never forgave him for.

He was 35 when he left Celtic in 1929 after over a decade of consistent service. He subsequently had a short time with Hearts then dabbled in Irish football before retiring to his Lanarkshire home and his passion for dogs. He died in 1960.

History tends to confuse Jimmy McStay with his elder brother Willie. They were both defenders, frequently played in the same team, winning Scottish Cup medals together three times in the 1920s, but whereas it was generally agreed that Willie was the better player (he was capped for Scotland 13 times whereas Jimmy’s only International honours were for the Scottish League), Jimmy was possibly the better captain.

He took over from Willie as captain in 1929, and it was his fortune to lead the team in the tempestuous year of 1931 with the epic Scottish Cup Final win over Motherwell, the ground-breaking tour of North America and the tragic events of the death of John Thomson. McStay earned great respect and admiration from everyone for the dignified way in which he led the club during the traumatic aftermath of that event. Further tragedy would of course visit the club when Peter Scarff took ill and eventually died of tuberculosis.

A trifle slow on the ground, he was imperious in the air and had tremendous passing ability. He was an attack minded centre-half in the tradition of Willie Loney whom he admired so much, and possibly Celtic lost rather too many goals because of his commitment to this role, but his greatest contribution to the club was in his inspirational leadership, so often being the voice of Maley on the field, and being able to bring out the best in key players like Peter Wilson, Alec Thomson and of course the goalscoring machine Jimmy McGrory.

He won five Scottish Cup medals in all, but only one Scottish League medal (in 1926 before he became captain). He was disappointed in this, but he never gave less than his best for his beloved Celtic. He went on to play for Hamilton Accies in 1934, and after managing Alloa immediately before the Second World War, became Maley’s successor in January 1940. In this, he was was no great success, but the times were by no means easy in war-time and the Celtic Board seemed to lack any great commitment to gaining the success that would have meant so much to their support.But Jimmy remained a great Celt until his death on Hogmanay 1973.

Paul McStay was generally recognised as being one of the best players of his day. A succession of Scotland team managers certainly thought that, for he was capped 76 times, and his paltry collection of medals (disproportionately low in comparison with his playing ability) can be explained by the undeniable fact that he came at a bad time of internal political strife and team managers who were visibly not of the Maley or Stein mould. Yet the fact that he is linked with Jimmy McGrory in a supporters’ song about Willie Maley, really says it all!

The best of these Managers, Billy McNeill gave him his chance in early 1982. Paul was a creative midfield player with great passing ability, an eye for goal and a clear desire to do well for the club that he loved and never left, however hard the media tried to persuade him to go.

He had first come to the world’s attention for the Scottish Schoolboys when they beat their English counterparts at Wembley in 1980, and, unlike a few of his contemporaries, Paul did live up to his promise, looking particularly good in 1982 when he very soon established himself as one of the best players in the country. But the Nicholas fiasco of 1983 and the departure of McNeill soon after gave McStay his first taste of the problems that would beset Celtic for most of his career, namely political instability, power seeking and the club in the hands of people who knew little about football and even less about what the club meant to so many people.

Paul’s best season was of course the Centenary Season of 1987/88 when he played his full part in the glories that unfolded, but that was short-lived and after many heartbreaks, especially after he became captain in 1990, he may have thought of leaving the club in 1992, on one famous occasion at the end of the season throwing his shirt into the Jungle.

But he didn’t go. Although he was one of the more stable and reliable figures in the chaos of 1993 and 1994, his form was never the same again, even after things stabilised under McCann. He had the misfortune to miss a penalty in the awful League Cup final shoot-out of 1994, but captained the side to the Scottish Cup in 1995 against Airdrie.

Paul’s problem was that he was not naturally aggressive nor a glory-hunter. Possibly he lacked some of the “devil” that other players of commensurate ability, like Jim Baxter or Denis Law had, but he still brought to the game some fine play. Even in the days when Celtic played badly, supporters could rely on at least a flash of genius from Paul McStay. He limped off the field at Stark’s Park, Kirkcaldy in April 1997 and disappeared out of the game altogether. He now lives in Sydney, Australia.

Willie McStay junior was a good full back who won a Scottish Cup medal in 1985 and a League medal in 1986. He managed a few teams like Sligo Rovers and Ross County and was a coach at Celtic Park. His best game was probably that epic day at Love Street in 1986 when Celtic played out of their skins to beat St Mirren while waiting for the really good news from Albert Kidd at Dens Park.