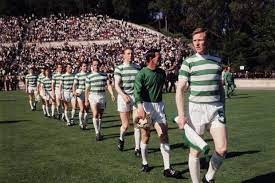 Words almost fail the historian as he tries to assess the contribution made to Celtic by Billy McNeill. A total of 23 medals in major tournaments speaks for itself, as does his total of 790 appearances. His nickname was Cesar, after the actor Cesar Romero. It is a pity that he was not nicknamed after the Roman Julius Caesar to whom he has more similarities.

He was born in Bellshill in 1940. A strain of his family heritage was Lithuanian, hence perhaps his fair hair, and he grew up in tough times in a tough environment. He was intelligent, however, and went to Our Lady’s High Scholl in Motherwell, where it was very soon apparent that he not only was a good football player, but also that he had great leadership qualities. When he graduated to Celtic Park, he met Jock Stein and a long-term bond of mutual affection and admiration was forged.

Billy made his debut in 1958 – troubled times for Celtic – but it was not until Bobby Evans left in 1960 that he really became a regular. He had a good season in 1960/61 but it ended unhappily and taught the young man that football can sometimes be a hard, unforgiving kind of game. In April 1961 his deserved International debut ended in tears when Scotland went down 9-3 to England, and then 11 days later, Billy was in the Celtic side which lost the 1961 Scottish Cup final to Jock Stein’s Dunfermline.

Such reverses taught him the need to battle adversity, but it was to be a long hard road. Billy became captain of Celtic in 1963 – once again a dreadful year for the club. His leadership qualities were much put to the test in the face of management of the club which was not only feckless but even deleterious on occasion. Little wonder that Billy and his attractive wife (who had been a dancer with Andy Stewart on BBC’s “White Heather Club”) considered moving to England as phrases like “for Celtic, the only bright spot was the performance of McNeill” became more regular in newspaper reports.

But Stein returned in 1965, and how fitting it was that Billy McNeill was the man whom Destiny chose to head the goal which started it all in April! The relationship between Stein and McNeill was a strong one, it often being said that McNeill was “Stein on the pitch”, and from now on, success flowed virtually non-stop and apparently inexorably.

McNeill was a dominant centre half, especially in the air, but it was his aura of invincibility that was the key thing, and which inspired so many others in the team. It was not that he didn’t make mistakes – one bad one at Celtic Park in March 1969 against AC Milan springs to mind – but they were few, and he could often compensate at the other end with a few goals for the club. Not very many centre halves score in Scottish Cup finals, but Billy did just that in 1965, 1969 and 1972.

The Celtic team at the time was not without one or two difficult characters – Gemmell, Auld, Johnstone could all be complex and feisty – but Billy was usually on hand to calm things down. While all players feared Stein, they respected McNeill, even in the early 1970s when the European glory days had clearly gone, but Celtic still enjoyed domestic success.

When Billy announced his retirement from the playing side of things, it was appropriate that it was at the top at the end of the 1975 Scottish Cup final against Airdrie at Hampden some ten years after the glory years had started at the same ground. He then did TV punditry for a spell (at which he excelled) then became Manager of Clyde, then Aberdeen (with whom he had a very impressive season) before the almost pre-ordained call came from Celtic Park to take up the reins in place of Jock Stein who had never recovered from the transfer of Kenny Dalglish.

McNeill’s two spells as Manager of the club were unfortunate in that he had to deal with a less than helpful Board of Directors, his second spell coming to a sticky end in 1991 when he was made to carry the can for the Board’s selfish unwillingness to compete with Rangers. His first spell from 1978 until 1983 saw him win one honour in each of his five seasons. He made two great buys in the shape of Davie Provan and Murdo MacLeod and unearthed some tremendous talent in the shape of Charlie Nicholas and Paul McStay. When Nicholas was transferred in 1983, McNeill left a month later, ostensibly over the fact the he was not given a contract. Everyone denied that it was anything to do with the transfer of Charlie Nicholas… but we all wondered.

McNeill was no great success in England at Manchester City or Aston Villa. Frankly, he was still obsessed with Celtic, giving himself away repeatedly in radio or TV interviews when he used the word “we” when he talked about Celtic. His return in summer 1987 was inevitable – he would say later that he took about three seconds to make up his mind – and he immediately took a grip of the team, once again made a few shrewd buys and in the Centenary Year of 1988 led the team to a Scottish League and Cup Double in breath taking style.

And yet this was not maintained. McNeill never really recovered from a 5-1 defeat at Ibrox the following August. Even though Celtic would subsequently put Rangers out of the Scottish Cup in each of the next three seasons, Celtic never really challenged Rangers in the League and were even, quite clearly, on many occasions inferior to Aberdeen. They were denuded of resources by a Board of Directors for whom little sympathy is possible, and Billy departed, more or less to private life (apart from TV commentary and punditry), in 1991.

But he remained a very clear and obvious Celtic supporter, being seen in Seville in 2003 for example and on several occasions appearing at Celtic Park as Ambassador and appealing for supporters’ help in contributing to good causes saying things like “I am only asking you to behave the way Celtic supporters normally do” as he very obviously made his own large donation to the particular cause in question.

The statue on the London Road side of the ground is always much visited on match days. It is iconic and worthy. It is such a great tribute to the man whose contribution to Celtic over many years defies quantification. As long as football is played, there will always be talk about Billy McNeill. And the words “of Celtic” will inevitably follow!