Whatever Happened to THIRD LANARK

1967 was not necessarily a good year for all of Glasgow. Yes, I know that Rangers fans hated it because they had to endure the sight of Celtic winning the European Cup and then their own team losing the final of the Cup Winners’ Cup the following week, but even worse news befell the lovers of Third Lanark AFC, for their team went out of business in 1967, and for them there was no rescue plan or resurrection. They simply disappeared.

Glasgow in the heyday of the 1950s had six football teams, and that was possibly one too many when Glasgow began to lose population with the slum clearances and the “overspill” population which tended to migrate to “new towns” like Cumbernauld, East Kilbride and Glenrothes rather than be resettled in Glasgow itself. Third Lanark were the unlucky ones, but of course, there was more to it than that. We are talking here about corruption and even theft, with a man called Hiddleston blamed (after his death) for what had gone wrong. It was a shame to lose the Thirds however, for they were a great part of Scottish football.

Founded in 1872 as an offshoot of the Third Lanark Rifle Volunteers (a group whose main task had been to extirpate Jacobites, although it was the working class which was beginning to cause more concern in the 19thcentury), they were founder members of the Scottish Football Association in 1873 and the Scottish League in 1890. They played at a ground called Cathkin Park, but that is misleading for there were two Cathkins, and the one that they played on in 1967 was in fact Second Hampden Park, for they moved there in 1903 when the new Hampden was built.

Known as the “Redcoats”, the “Thirds”, the “Warriors”, the “Sodgers” and the “Hi-Hi-Hi”, Third Lanark twice won the Scottish Cup in 1889 and in 1905, and once won the Scottish League in 1904. Their first win in the Scottish Cup was against Celtic in the final (Celtic’s first season of existence) and it was a controversial one. The final was scheduled for February 2 and Thirds won 3-0 in the snow at Second Hampden before 20,000 spectators, but the conditions had rendered the pitch unplayable and the game was played as a friendly (but the crowd were not told that, for fear of a riot!) But we are told that some of the crowd sang songs “such as might be heard at a political meeting”. Intriguing! But all this means “A Nation Once Again” and “The Wearing O’ The Green” sung with gusto by the Celtic element. Slightly better weather prevailed the next week when the real final was played, and this time Thirds won 2-1. They also beat Rangers 3-1 in a replay in 1905, and that was a year after they had won the Scottish League in 1904 their manager had the unlikely but somehow appropriate name of Frank Heaven.

Third Lanark in 1905 with the Scottish Cup after beating Rangers. 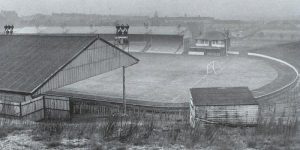 They had many connections with Celtic. Tom Maley played for them before he joined Celtic, and Johnny Campbell finished off his career with the Thirds. Between the wars, Alec Bennett was their manager, and of course Tommy McInally played three years for Thirds between his two spells at Celtic famously “pining for home” after his first falling out with Willie Maley. But Maley always confessed to a “soft spot for the boy” and took him back.

By the 1930s they had become a yo-yo club between the two Divisions, although they reached the final of the Scottish Cup in 1936. Their last big game was the Scottish League Cup final of 1959/60 when they lost to Hearts. Around 1961 they had a great forward line with players like Harley, Hilley and Gray – but financial circumstances compelled Thirds to sell them. In 1962 they met Celtic in the quarter final of the Scottish Cup and were 3-1 up at half time but Celtic then got going and were heading for a 4-3 win, until Thirds equalised at the death before Celtic won the replay 4-0. On Monday April 8 1963, they won their last ever trophy when they beat a woeful Celtic team 2-1 in the Glasgow Cup final. They were relegated in 1965, somehow lasted two years in the Second Division with no money and loads of debt, and finally succumbed in 1967.

There remains a residue of affection for the Hi-Hi-Hi’s and many of their supporters defected to Celtic when they went out of business (this was 1967, after all). There is now an amateur team playing at Cathkin, and one would love to see them come back into the Scottish League – but that seems some way in the distance.