Home / News / WE ARE BUILDING IT

WE ARE BUILDING IT 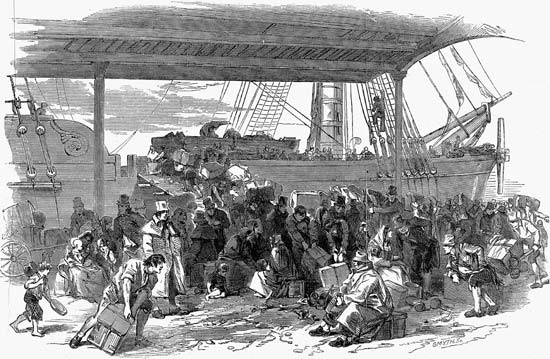 The last few years have seen a real surge in support for a Famine Memorial in Glasgow. Between 1845 and 1855 almost 100,000 Irish found a new home in Glasgow. Coiste Cuimhneachain An Gorta Mór (Great Hunger Memorial Committee) was formed with the intentions to build a permanent memorial to those who died of starvation or were forced to emigrate, including those who came to the City of Glasgow during ‘An Gorta Mór’.

The idea behind the design wasn’t just down to one person. Instead the committee took an innovative way to get people thinking and also talking and looked for designs to which they would narrow down to just three and allow the piece to be chosen there after.

Last October the community were invited along to the Barras Art and Design Centre to see models/maquettes of the three final designs for the memorial, which will be erected in front of St Mary of the Assumption Church in Abercromby Street, Calton.

“The multi-generational Irish community gathered together to see the designs and to hear from the artists. There was a fantastic atmosphere as people went between the three models debating, deciding, changing their minds and going round again. Then it was full steam ahead to raise the necessary funds. Donations can be made via PayPal or by sending a cheque. Anyone who wishes to organise a fundraiser in their local area please let us know and we can provide merchandise or a speaker and help to publicize it. We are Building It!”

Having seen all three pieces, I must say they are all beautifully unique in their own way. First up was John McCarron’s sculpture which reminded me very much of other Famine Memorials throughout the world – it shows the Irish that arrived in Glasgow near death “they are thin, they are gaunt, they carry nothing because they had nothing”.

Next up was Malcolm Robertson’s artwork which like before is just as eye catching – another sculpture similar to the one above it shows the Irish arriving in devastating conditions “I wanted to try and do something that focused on the past but also the future”.

Finally, the last piece which is by Gardner Molloy and in my opinion is a very unique piece of artwork – this isn’t just one sculpture it is a number of them. Hands of all shapes and sizes “I want people to enter the garden to walk among the memorial. The viewer moves through the pieces seeing hands of women, children and men”.

I personally love all three but having seen them all for me it would the last piece that stands out most. I’m just back from Boston where I went to see one of their stunning Famine Memorials located right in the City centre. That art piece was similar to first two sculptures.

They first have a man, woman and child arriving in Boston barely alive and with rags for clothes. The next sculpture located directly beside it is the same family but now they are well dressed and standing proud. Dotted around the memorial are facts about the famine and tales of a real rag to riches story including our own JFK and how he became president of the country.

It was very emotional to see just how much the people of Boston appreciate the Irish who came in their thousands so long ago but yet have made such an impact on the place today. From pubs to the names of streets there is so much Irish culture celebrated.

For this reason, I really do believe it is so important the Glasgow memorial gets as much support from not just the people of the City but the Irish at home. Many would say they already have a rather well-known Famine Memorial in the heart of Glasgow and it is a place that is known the world over – Celtic Park.

Everyone knows the story of Celtic and who they were founded by and the reasons behind it, but the time has come when many people believe, particularly the Irish of the community that it is now time to show respect and remember a devastating time in Irish history that not only shaped our own island but the City of Glasgow today.

Rachel Lynch a journalist from Dublin with InTallaght. She has supported Celtic her entire life with a home address of Celtic Park she didn’t have much choice. Her first memory as a child was the road to Seville and also her first team seeing the likes of Larsson, Thompson, Petrov, Sutton & Hartson. Some would say she was spoilt from the start with Celtic, she was….