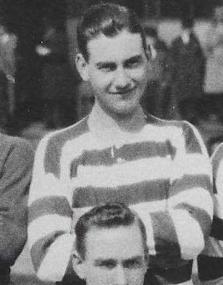 It is often said that it is difficult to be the son of a famous father. This may well have been the case with John McMenemy, son of the great Jimmy “Napoleon” McMenemy. John was, like his father, an inside forward. Born in 1908, when his father was at the apogee of his career, John played junior football for that famous Glasgow junior team St Roch’s (from whence sprung Jimmy McGrory of course!) and joined Celtic in December 1925. But it was far from easy to break into that great forward line of Connolly, Thomson, McGrory, McInally and McLean, and John had to bide his time.

He may have despaired of ever breaking through – the team won the Scottish League in 1926 – but his break came when McGrory was injured (he was possibly deliberately crocked) in a hard game at Falkirk in early April 1927. (This was in fact McMenemy’s debut, for McInally was out that day). McGrory’s injury meant that he was out for the Scottish Cup final, and that McInally had to move to the centre, giving John a Cup final game for Celtic at inside left against Second Division part timers, East Fife.

Everyone fancied Celtic that day, but this did not do anything to calm the nerves of 19-year-old John McMenemy. He was shaking in the dressing room, trying to laugh at the banter of McInally and to listen to the sage advice of McStay and McLean, but having problems lacing his boots. In walked Maley. “What are you shaking for, John? It’s the other team that should be shaking! Part timers from Fife! This is Celtic you are playing for! Your father did it often enough! It’s your turn now! It’s an honour and a privilege to wear those green and white jerseys! Get out and bring me back that Cup!” Celtic won 3-1 and John played well to the delight of his father, and of Maley.

But he would not have many more great days for Celtic. Season 1927/8 was a difficult one with McMenemy playing only occasionally and suffering constantly from being compared unfavourably with his father. Early the following season, Motherwell came in for him, and after long discussions with his father, he decided to accept the offer. He was more or less guaranteed a first team place, and the atmosphere was less rarefied and pressurised at provincial Motherwell, where a good team was developing.

In fact they were better than Celtic. Celtic may have got the better of them in two Cup finals (dramatically in 1931 and more mundanely in 1933) but Motherwell won the League deservedly in 1932 with a wonderful forward line of Murdoch, McMenemy, McFadyean, Stevenson and Ferrier, In fact, had they not done so, Rangers would have done 9 in a row long before Celtic did so, We therefore have every reason to be grateful to “Sailor” Hunter’s men and in particular John McMenemy who found his true place at Motherwell, however much he belonged to a Celtic family. One wonders how old Napoleon reacted to the two Scottish Cup triumphs of 1931 and 1933!

1932 was a great year for the McMenemys however. Not only did John win the League with Motherwell, his brother Harry won the English Cup with Newcastle United – all this bringing even more medals to the McMenemy family. John won one Scottish cap, and it came about it October 1933 when his brother Harry was injured and the SFA kept it in the family by calling up John! Sadly Scotland lost, and John never was invited again.

John died in 1983. He was a great player, although sadly his best days were not for Celtic. Nevertheless he had his moments for Celtic, and is well worth a place in the Celtic and McMenemy family. He was not as good as Jimmy – but then again, neither was anyone else!