Home / Celtic AM / Thousands Are Sailing – A Celtic Fans Story 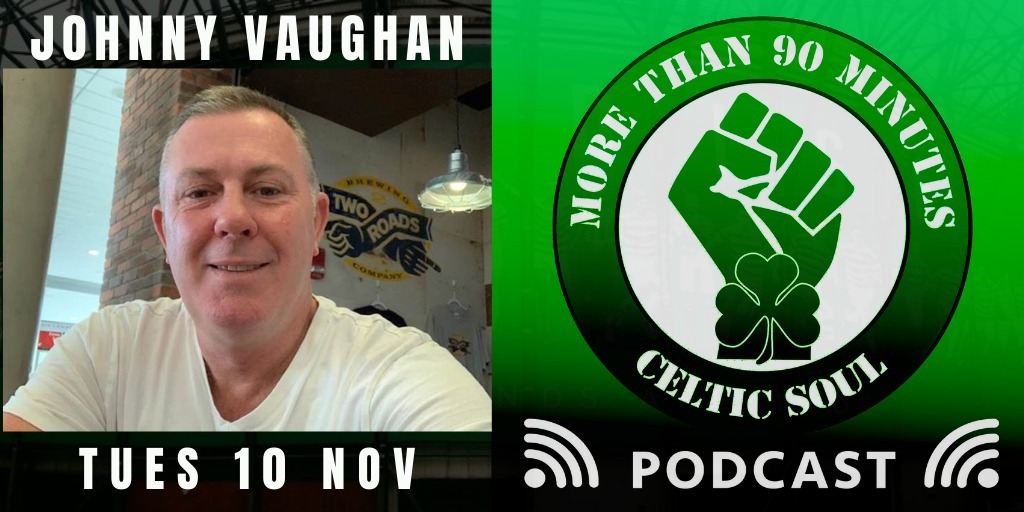 Back in the Eighties, Johnny Vaughan’s Dad took him to see Celtic play Shamrock Rovers in his hometown Dublin and a lifelong connection to the club was born.

A decent schoolboy footballer but when Johnny hit his teens he realised that he was not good enough to make it across the water but was awarded a Soccer scholarship to travel to Connecticut in the US which was a gift because there was very little prospects back in the late eighties for school leavers in Ireland.

Many school leavers caught the boat to London or a plane to the States in search of a job and better prospects. After leaving college Johnny played football in the States until the late nineties when the call of home became too much and he returned to play with League of Ireland outfit Longford Town under Stephen Kenny who was cutting his teeth in management. A journey that would lead Kenny to his current job as manager of the Irish national team who take on England at Wembley tomorrow night.

While standing in the rain waiting at a bus stop with no money in his back pocket on a Friday night. Johnny made the decision to emigrate back to the States. He no longer has a yearning for the Emerald Isle although he looks forward to returning home for family occasions, which also gives him the chance to go to see Celtic.

Connecticut which is sandwiched in between Boston and New York is now home where he owns and runs Vaughan’s Pub and Restaurant and teams up with fellow Celtic fans from across the US at events like the Plough Bhoys Philly Feille.

To listen to Johnny’s story and his passion for Celtic click into the Celtic Soul Podcast Episode 40.