Those of us who saw Willie Fernie play saw a Genius 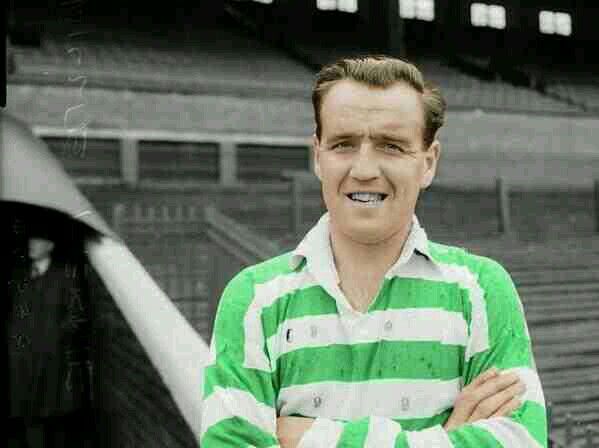 Kinglassie is a very ordinary Fife ex-coal-mining village. Its best days are now clearly well behind it, and the once vibrant community never really recovered from the Thatcher-Scargill civil war of the mid 1980s. Coal mining is sadly no more. Willie Fernie was born here in 1928 in what was a fertile area for Celtic football players. John Thomson’s Cardenden and Charlie Geatons’ Lochgelly are very close, with Alec Thomson’s Buckhaven and Scott Brown’s Hill of Beath only about half an hour away. Fernie is essentially a Fife name. There is a Fernie Castle, again about half an hour away from Kinglassie but on a rather different social plane. Now a very rich hotel, it often becomes the temporary home of American golfers when the “Open” is in St Andrews, and only a very opulent “daddy” can afford it for a daughter’s wedding!

Presumably Willie’s forbears came from the small village that grew up round the castle. The Fernies who lived in the castle in the middle ages were rather obscure aristocratic nonentities and not really very famous at all. That cannot be said about our Willie Fernie!

Willie Fernie was a player of the old school. He was a dribbler, a craft that even in the 1950s was beginning to die out. But he was an expert at it, and could do other things as well. He could pass, tackle, had a fair turn of speed and could take a goal when required. He played in the 1950s a time when Celtic had loads of great players – Collins, Peacock, Tully, Evans, to name but a few – but did not have a great team, such was the shambolic disorganisation that prevailed at Parkhead at the time.

Willie Fernie was born in 1928. These were hard times, and you really had to be tough to survive in the brutal football that existed in the Fife mining communities of that time. It was with a juvenile team called Leslie Hearts that he cut his teeth. “Cut his teeth” is perhaps an inappropriate metaphor, because in the Scottish Juvenile Cup Final of 1948 at Easter Road, he was carried off with a broken jaw but had played well enough to convince a Celtic scout to come to visit him in hospital, and he signed soon after.

After a year or two in the reserve side and being farmed out occasionally to the Kinglassie Colliery side, Willie Fernie made his debut at Love Street, Paisley, towards the end of the 1949-50 season. He soon had the pleasurable experience of winning a Glasgow Charity Cup medal against Rangers in May 1950, in the game that was immortalised by the presence of the American film star Danny Kaye. But Fernie realised that he would have to work at his game, and it would be some time before he could hope to establish himself. In fact it was  season 1952-53, before he could be called a regular, and in that see-saw season his form as sporadic as the rest of the team. Yet Jimmy McGrory and Bob Kelly were convinced that there was talent here, and the big break came when Charlie Tully was injured before the Coronation Cup Final of May 1953, and Willie was called up for this tremendous occasion.

From then on, he never looked back, and the League and Cup double of 1953-54 was won by Willie Fernie as much as by anyone else. He played at inside right and although he scored 13 goals, it was the way that he could make goals for others that really impressed everyone. His classic was the goal that he made in the Scottish Cup Final of 1954 for Sean Fallon to finish off. It was claimed with a touch of romantic hyperbole in an Irish newspaper that “the shamrocks burst forth on the banks of the Shannon ” to applaud such Fernie brilliance. He was even compared with the immortal Patsy Gallacher!

At the end of the season, Willie was given the first of his 12 Scottish caps, and then he was picked to travel to the disastrous World Cup of 1954.He would have done better to have missed out on that one. Like most players on that dreadful experience, he was given the bullet as far as International honours were concerned, at least temporarily, but such was the quality of his Celtic performances that Willie came back, and was one of the few Scottish players to return from the Sweden World Cup of 1958 with his reputation enhanced. He played in only one game in Sweden, but had done so much in the qualifying games that he deserved more employment than that. As with Celtic, Willie was often the victim of crazy selection with Scotland as well!

For Celtic, he played in the two unhappy Scottish Cup Finals of 1955 and 1956. 1955 was unlucky, but 1956 was the game in which Fernie simply did not perform. In a clear indication of how much Fernie meant to Celtic, the team visibly collapsed around him as he simply had a bad game.There were of course other reasons for Celtic’s bad defeat – not least that the talented Hearts team played better. He would have found this frustrating, but he kept on with his task and his best moments in a Celtic jersey were still to come.

On Hallowe’en 1956, he inspired Celtic to their first ever Scottish League Cup Final victory over Partick Thistle. Then, the following year, now playing at right half and part of the immortal half back line of Fernie, Evans and Peacock, Willie played his glorious part in the 7-1 thrashing of Rangers in the League Cup Final, scoring the seventh goal with a penalty kick. In some ways he was the architect of this triumph controlling the right side of the midfield like Peter Wilson or Sunny Jim of old. And it only came about because of the injury to Jock Stein which compelled his retiral. Evans now moved the centre half, and someone else was needed for right half. Who better than the effervescent and ubiquitous Willie Fernie?

Had Willie been at Parkhead when Jock Stein was Manager, the team would have won the European Cup more than once, for he was a superb player. There was little that he could not do on the field, being dubbed “Scotland’s Stanley Matthews” and threatening to usurp the title “It’s Ma Ba” from McKenna of Partick Thistle of a decade earlier. With Bobby Collins and Charlie Tully playing alongside him, Celtic were indeed rich in players of natural talent, and were a joy to watch. His dribbling skills in particular could be guaranteed to send a ripple of appreciation round the crowd.

But things change. Celtic embarked on a youth policy and Fernie was one of those sold off, in his case to Middlesbrough on December 1st 1958, to make way for the ill thought out shambles that was to be the Celtic set-up of 1959 and 1960. There are those who deny that his departure, like those of Bobby Collins and Bobby Evans, had anything to do with playing for the new floodlights (which were indeed a sight to behold), but the connection was a coincident, at least!  He was on Teeside for less that two years, yet Boro fans still talk of his “halcyon days” there, along with the abrasive but talented Brian Clough.

The Celtic fans were distressed at his departure, but in a rare moment of visionary common sense he was brought back in October 1960 to be an “auld heid” for the youngsters. He took them to the Scottish Cup Final, paying particular attention to the development of Charlie Gallagher, but the result was the tragedy of Dunfermline’s victory of 1961, something that distressed Fernie intensely and deprived him of a second Scottish Cup medal.

There was to be yet another cause of pain for Celtic fans when Fernie was off loaded for the second time – to St.Mirren in the autumn of 1961, once again when there was still a great deal of football left in him. There Willie helped the Buddies to beat Celtic 3-0 in that disgraceful Semi Final of 1962, in which the raw, young, leaderless Celts, talented undeniably but not so streetwise in the ways of the world were “ambushed” by Willie’s St Mirren who had allowed Celtic to beat them 5-1 the previous Monday night in a meaningless League match. It was a different story in the semi-final. It would have been nice to see Fernie’s St Mirren win the final as well against Rangers, but it was not to be.

Willie then dabbled in the minor reaches of Scottish and Irish football for a few years, before returning yet again to Parkhead, soon after Lisbon , to be a reserve team coach under his old friend Jock Stein. He thus deserved a great deal of credit for the development of McGrain, Dalglish, Hay, etc. He was Manager of Kilmarnock from 1973 to 1977. He did well for them, taking them to the Premier League but was peremptorily dismissed after a bad start to season 1977/78. After his dismissal, he gave up football altogether in favour of driving taxis. Quite a few fans on match day would get a taxi from one or other of the railway stations to Celtic Park, and remark on the fact that the taxi driver with the Fife accent looked very like Willie Fernie – but no, that couldn’t possibly have been him, could it?

He was happily married (from 1956 onwards) to Audrey Douglas whom he had met at Celtic Park, for she was Secretary to Jimmy McGrory. Soon after the turn of the century, he developed dementia (a common problem with ex-football players) and died a few months after his wife on July 1 2011.

Those of us who saw Willie Fernie play saw a genius. It remains a tragedy that Celtic did not exploit this awesome talent to a greater extent than they did. One Scottish League medal, one Scottish Cup medal and two Scottish League Cup medals are a poor yield for such a prodigious input from this essentially quiet and shy man from the backwoods of the Fife coalfield. He won 12 caps for Scotland, and was worth a great many more.

Born in 1948, David Potter first saw Celtic at Dens Park, Dundee in March 29. It was a 3-5 defeat, which equipped him admirably for the horrors of the early 1960’s. He had “followed” Celtic for a few years before that and recalls having been called upon to impersonate Jock Stein and receive the family silver teapot which had to do for the Scottish Cup as it was presented on April 24 1954, after he and his father had spent a nerve wracking afternoon listening to the radio!  Since then, he has “followed” every Celtic game with bated breath, and has written extensively about the club in magazines and books. His favorite team was that of 1969 (which he rates marginally better than 1967) and his favorite player was Henrik Larsson. His ambition for Celtic is for them to keep on winning silver in Scotland and to be something in Europe once again. His other interests are cricket and drama. He is 70, a retired teacher of Classical Languages, married with three children and five grandchildren. He now travels on the Joseph Rafferty bus from Kirkcaldy. He also loves Forfar Athletic.