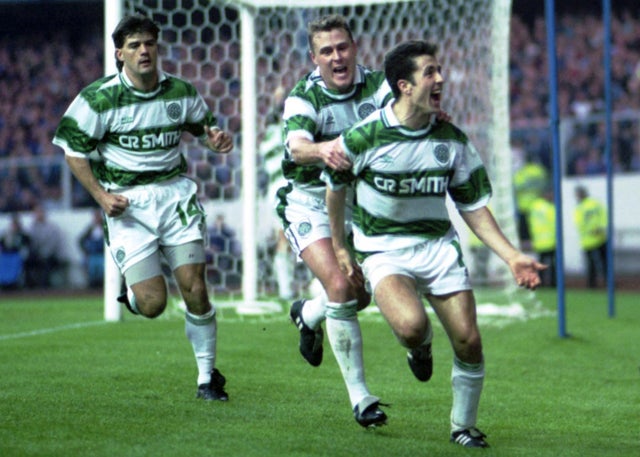 It was the best feeling ever, I had offers from other clubs but when Celtic came inmfor me there was no other club in my mind.

Liam is an Irish football legend when he first signed me I lived with him for six months as he wanted me to get match fit and keep and eye on my dietary habits.

I found it hard to settle in immediately and had to work hard on my fitness but I got there in the end.

Great bunch but I would say I was closer to Frank McAvennie and Rudi Vata.

We had some great nights out and I had plenty with Macca, do I need to say more!

He gave me a new contact and played me in the team but he should have beenmanager of a running club.

He said what he was going to do and he did it, rebuild Celtic Park and kick startedthe silverware returning to the Celtic Park trophy room. He put in the foundations for the club that we have today.

Tommy trusted me and played me in the big games although he did drop me for the 1995 Scottish Cup final. Tommy is a Celtic legend and I will never forget him.

I played in 8 games against Rangers and scored in two. A lot of better players than me played in those games and never hit the back of the net so I am proud of those goals.

I took a penalty and scored but we lost and it was a very disappointing feeling.

I think I played every round but not in the final. It was my last day at the club and I knew my time was up as Celtic were bringing in quality players like DiCanio, Cadette and Thom.

The biggest mistake I made was leaving Celtic I should have stayed and worked onmy game to win Tommy over but I cant look back in anger as I loved my time there greatly and to have been a small part of the Celtic story. I am part of the Celtic family and I have made friends for life.