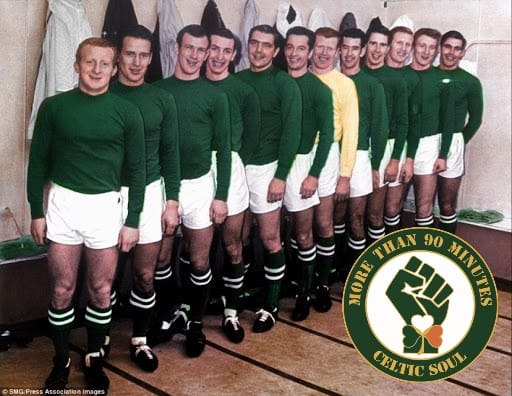 John Fallon celebrated his 80th birthday today, the original Holy Goalie, John was born into a Celtic family and would go onto live every young bhoys dream by signing for the Hoops where he would go onto play for the team for over a decade during the clubs greatest period in our unbroken history.

John has been ever present home and away supporting Celtic over the decades since his retirement from professional football. John is ever present at Supporters functions and charity events and always has time to chat to fans on match day.

A Lisbon Lion who played at the highest level and won a bagful of medals. I first met John in Las Vegas back in 2002, when a friend introduced me. I arranged an interview soon after for the fanzine and then after striking up a friendship with John, he joined us as a columnist. Since then he has contributed to almost every issue.

His column has proved one of our most popular because of his honesty and willingness to call out officials and referees and their honest mistakes! John has continued to support our charity events from he first came over to raise money for the St. Margaret’s CSC Gary Kelly Cancer Charity Dinner with Neil Lennon back in 2003. On his last visit to Drogheda, he joined Gary in his local for a few Brandy Shandies, two footballing legends modestly chatting about life rather than their achievements.

Over the years John has introduced me to so many former Celtic players including Sean Fallon who I had the pleasure of him chatting about his career in a hotel in Ballymote in Sligo on the night before he unveiled the Brother Walfrid monument. I only wish I had recorded that conversation.

John has picked me up when I have arrived in Glasgow on early flights to take me to his house for breakfast before driving me to away games and then dropped me back to the airport. A giant of a man. Cut him and he would bleed green. He is Celtic to the core.

At the start of the lockdown, I phoned John for a quick chat and ended up doing the following short interview.

Growing Up A Celtic Fan?

I was brought up in a family of Celtic fans, my father and brothers all supported Celtic, The first game I can remember was against Clyde in the 1947/48 season and that’s when I got the bug for Celtic and it has never left me.

I joined Celtic officially in December 1958. I started off my underage football journey as a centre forward and then moved into midfield as an under age player and only started playing in goals when I was in my late teens.

Who signed you at Celtic?

I was signed by the great Jimmy McGrory, he was a complete gentleman but not that much of a manager I’m afraid.

I found settling in easy and it was not bad because of my previous experience training with players as part of the Kelly Kids.

Big Billy (McNeill) , (Luggi) John Clark, Charlie Gallagher, (chopper) Bobby Murdoch, Bobby Carroll and John Divers were really good mates from the Kelly Kids and the Crabbit One, Paddy Crerand, he would fight with his shadow if things went wrong.

We did not have many nights out I am afraid, we were under constant watch back in those days. Celtic fans would report to the boss if you went into a bar. I walked into a bar with my mates from the street and asked for a half pint of shandy. I must have been 18 going on 19, the barman asked, “Are you the boy who signed for Celtic?” I shrugged my shoulders, stuck out my chest and proudly looked at my mates and said YES and he just looked at me and said “See that door you came in well get the f**k out before your kicked out”

1965  Cup Final well that’s the year everything started when we won the Scottish cup that year, Jock Stein came back as Celtic manager and the rest is history, We went on to win leagues, cups, doing trebles along the way and winning the big cup in Lisbon.

Your Greatest performance between the sticks?

It is difficult to single out one game. I loved the experience of playing in Madrid.  Both League and Scottish Cup finals I played in (2 Scottish Cup Finals & 3 League Cup Finals) all were special and also playing in the World Club Final against Racing Club.

I treasured every game I played for Celtic.

I was heartbroken leaving Celtic against my wishes but before I knew it I was a Motherwell player.

John also spoke to us on episode 2 of the Celtic Soul Podcast and we have lined him up for a more indebt interview for later in the week when John will look back on his 80 years of following and playing for Celtic.

I phoned John up yesterday to wish him a Happy Birthday. Covid 19 means that John has had to reduce the numbers at his party today but I’m sure he will be surrounded by his close friends and family and have a great night.

John is Celtic and Celtic is John. Happy Birthday John. Wish I could be there to buy you a Brandy Shandy and raise a glass to the Original Holy Goalie. Your Celtic Soul Polo Top is in the post. Thanks for everything over the years and for the keeping us entertained with stories and the odd song.