Home / News / The Importance of the Celtic to our Lives

The Importance of the Celtic to our Lives 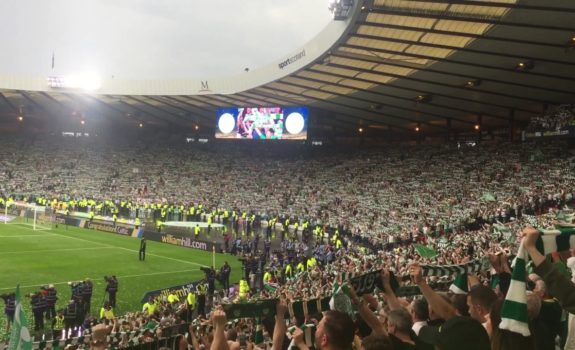 Let’s be frank about it. The season was a write off many Celtic fans would call it the season from hell. We are in a very difficult place at present regarding the near future title, the disharmony and disconnect between the boardroom and the terraces does appear to be at its greatest since the halcyon days of the takeover in March 1994, that ousted the old board and ushered in Fergus McCann and a new era at the club.

It must be noted that the Celtic Trust have played a hugely responsible role in overseeing much of the frustration of the support last season and articulating this to the appropriate channels while ensuring that all protests done adhered to safety guidelines. A shining light of the Celtic support the Trust once again stood up when counted for the support it represents so well and Share Our Values.

I really did feel that the frustration of supporters has been massively increased not just by the poor on field performances during the season, but by the sense of helplessness at not being able to attend games and have any influence, which is a huge void in many people’s lives. Celtic mean so much to so many of us, it’s never just about the games itself. It’s the journey, your mates, the pre and post-match routine.

It may seem trivial on the larger scheme of things given the crisis going on throughout the world due to the horrific pandemic. But make no mistake about it no one should underestimate the importance of the Celtic to the lives of so many within the faithful. We all need to try to keep safe over the coming months and look forward to better days ahead.

The season that promised so much was fairly catastrophic. I’m an optimist generally and do believe that there are a few twists and turns to be played out yet, but any honest assessment of the events of the season cannot but acknowledge how mediocre the team performed. Europe was a shambles and our League Cup exit on November 29th to Ross County was gutless. A defeat which saw our phenomenal run of thirty-five consecutive Cup victories end.

Yet in amongst the darker days of the season came a history making Cup final which was a tonic so badly needed to lift the mood of the faithful. A chance to secure a quadruple Treble, an achievement that will never ever be matched again. Had you told me a few years ago that Hampden Park with Neil Lennon as manager would be where we would be making history it’s fair to say I’d have had a serious level of trepidation about that prospect. It has been a venue that for the first half of the last decade was home to so many cruel defeats and days best forgotten.

Our first visit of the previous decade to the National stadium that sunny day in 2010 certainly differed from our last in December 2019 as we exited Hampden Park soaked to the skins but beaming in the joyous victory of our League Cup triumph. What was a classic back to the walls display, the victory against the Rangers (2012) that day was as sweet as they came. A performance lacking in class and flair meant little as we took the silverware back to Paradise yet again.

The previous decade certainly began seeing many of us dreading the thoughts of a day at Hampden Park, yet we would finish the decade with a sense of invincibility about playing there, as we captured trophy after trophy on so many memorable days.  Truth be told for me personally the days at Hampden Park over the past few seasons have been some of my greatest days following the Celts and this certainly added to my sense of sadness waking up on cup final morning knowing it was the comfort of the couch as opposed to the slopes of Hampden Park was where I would be witnessing history being made.

The confidence going into the National Stadium was really high that Sunday morning when speaking to many Celtic mates. Such confidence helped settle the nerves prior to kick off. One younger Tim messaged me “Sure its Hampden, we always win there”. His experience certainly differed to many of us who had witnessed darker days at the famous ground.

It almost seems like a lifetime ago when the words “Hampden hoodoo” were commonly associated with the Bhoys. Defeats at Hampden Park over the past decade to the likes of the aforementioned Ross County (Twice), St. Mirren, Caley Thistle, Kilmarnock, Hearts and also on penalties to the Rangers (2012) really did give many of us a sense that there was a spell cast against us by the footballing Gods, such was the number of “Honest mistakes” and freakish goals we conceded. I had the misfortune of being present at all these defeats and I vividly recall walking through the turnstiles as we faced the Rangers (2012) at Hampden Park in Brendan Rodgers first season in the league cup semi-final in October 2016 thinking “please let today be different”.

I know talking to many Bhoys prior to the game they felt the same. All around the Celtic end that day were Bhoys smiling through gritted teeth talking about “Being back in this kip again”.  A late, late Dembele double nutmeg later and suddenly “that kip” they call Hampden Park was a little slice of green heaven. Four weeks later and having secured the one hundredth trophy in the club’s history with a defeat of Aberdeen and the Celtic end was rocking.

It is fair to say coming back on the boat on the Sunday I was able to enjoy a few pints after a magic day. Our Bhoys had won the one hundredth trophy in the club’s history and as the waves crashed against the ferry on a fairly rocky sailing home, that evening it was hard to wipe the smile off your face. Season 2016/17 finished as we all know with Tom Rogic’s iconic invincible Cup final winner. The scenes of joy at Hampden that day were unsurpassed. A great friend of mine, Connor Johnson, with whom I’ve travelled with for years looked at me with tears rolling down his eyes. No words needed. Just one of those days. Unforgettable Celtic days.

The five Cup final victories in Hampden that followed carried with them memories to last us a lifetime, took our club to unprecedented heights domestically with treble treble’s secured as well as ten consecutive domestic trophies won. More than that though it gave supporters young and old days of Celtic heaven that will never be forgotten. The consistency, performances, style and aggression that we saw from Celtic sides at Hampden was a joy to watch. But better than that again was the Celtic support in full flight where we took our seats in one of the most soulless arenas in world football and created an atmosphere unrivalled.

To witness the Bhoys entering the field with Neil Lennon suited and booted at the Cup Final for the occasion surrounded by empty stands was just bizarre. As we know a roller-coaster of an afternoon saw us seal history on penalties. Celtic and Cup Final penalty shoot outs traditionally don’t end well but with Christmas on the horizon we certainly got our gifts early. It’s always special seeing the Bhoys lift trophies, with the Scottish Cup particularly having a special place in the hearts of the Faithful, but this one was different. If I’m being honest, I wouldn’t say different for the better.

There is nothing like being surrounded by your pals and family members you travel with regularly on such historic days and the sitting room and your couch, despite the home comforts can never replace that. Still, we should never look past such an historical achievement and it gave us all a bit of respite from the realities of modern life at present. For this Dublin born Celt the weekend was one to look back fondly on as twenty-four hours earlier Dublin won the All-Ireland Championship, just like at Hampden Park in an empty Croke Park. We really are living in surreal times but we can hopefully get back to Paradise soon.