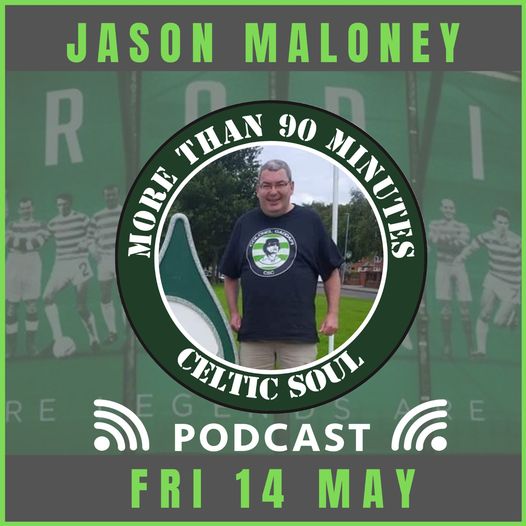 If football teams were people then Jason Maloney would be married to Shamrock Rovers but he would also keep Celtic as a Mistress  and would enjoy the occasional fling on football weekends around Europe on his many travels over many years. Jason could be described as a Terrace Anorak, who enjoys the whole football experience and not just the 90 minutes on the terrace. He is also the former editor of the Shamrock Rovers Fanzine – the Glenmalure Gazzette.

The interview kicks off with Jason talking about how he suffered recently with Covid19 and he had a word or two for the conspiracy theorists before the conversation turns to Celtic and the season we have just witnessed as we stumbled from one crisis to another in a season where there seemed to be no plan B.

Jason chats to Andrew about manager in waiting Eddie Howe’s CV from his time at Bournemouth including some decent signings he made along with a few bad ones. The bhoys shoot the breeze about Scott Brown’s time at Celtic and the improvement we saw when Brendan Rodgers arrived.

Many buses and trips to see Celtic were discussed including many in Europe with the Gallowgate Travel Club before the conversation turns to Shamrock Rovers, Fan Ownership and the recent 2 million euros investment in the club by Dermot Desmond.

Jason also shares some great stories of his travels to see different teams abroad including St. Pauli and how big a part football culture plays in his life and how much he is missing the whole fan experience.

No Celtic Soul Podcast would be complete without the guest climbing into the Time Machine and Jason travels back to 1998 when Celtic stopped the 10.