Home / News / The FIVE at 5ish on Tuesday

The FIVE at 5ish on Tuesday

The transfer window is shut. The amount of half-truths and rumours that we have had to listen to and read about is unbelievable (excuse the pun) and it’s the same every time from it opens till it closes. I understand the newspapers need to fill column space and that Sky Sports News needs to fill minutes that turn to endless hours of repeating itself and now with social media we have the bloke down the pub telling us that he has heard from a good source that Victor Wanyama among others is on his way back to Celtic Park. Funny the bloke down the pub never mentioned O’Connor, Frimpong or Taylor. Praise the Lord its Shut!

Before the window shut Celtic signed of versatile Irish youngster Lee O’Connor on a four-year deal. He can play anywhere across the back four or as a defensive midfielder.

O’Connor who joins from Manchester Utd where he has been since he signed as a 16 year old. The Waterford native was Irish under 19 captain at the Euros during the summer where they reached the semi-finals. After signing in Glasgow yesterday he re-joined Stephen Kenny’s Ireland under 21 team in Dublin and Irish based Celtic fans could get a glimpse of him at Tallaght on Friday night when the Boys in Green take on Armenia in a Euro qualifier.

O’Connor joins other underage Ireland players at Celtic, Luca Connell who signed from Bolton Wanderers earlier in the summer and Jonathan Afolabi who played alongside O’Connor at the Euros and joined Celtic after being released by Southampton.

O’Connor also joins another Celtic player who was part of the Euros squad Barry Coffey. With Armstrong Oxo Flex and Ballyfermot’s goal hero from Sunday Johnny Hayes making up the Irish contingent at Paradise. 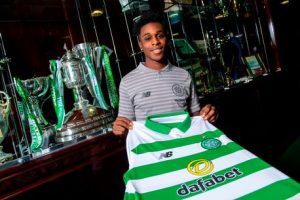 Young right back Jeremie Frimpong signs for Celtic on a four-year contract from Manchester City. Speaking to the Celtic website, he said: “It feels amazing to have joined Celtic. What a massive club to be part of. I’m just lucky to have been picked and I’m grateful for everything. I’m just happy to be here and I just want to get on the pitch and show the fans everything that I’ve got.”

“I started going on YouTube to watch Celtic, and when they were on TV, I watched the games. I watched Sunday’s match against Rangers. What a game! Celtic were brilliant and deserved to win.”

Another young player in on a four-year contract from Kilmarnock is Greg Taylor. The Scottish internationalist is still only 21-year-old and comes highly ratedI have no doubt that the likes of Tosh McKinlay and Willie McStay will have had an input into all of the young players who have joined us over the transfer window.

He told Celtic TV “It’s been a whirlwind of a day but I’m over the moon to be here and thankfully that’s it over the line,” “As soon as I knew of Celtic’s interest, I was desperate to come, so it’s been a great day, certainly now that it’s done.”

After signing he re-joined the Scotland squad, which also includes Callum McGregor, Ryan Christie and James Forrest. Steve Clarke was a breath of fresh air in Scotland while at Kilmarnock his success got him the Scotland job and he has shown faith in the left back by giving him his international debut in the absence of the injured Tierney and Robertson. The Sevco fans won’t be happy as he was supposed to be one of their own but if so he has now seen the light and will be reborn in Green and White. Praise the Lord.

Hopefully regular first team football will improve all the bhoys and they should take heart from Callum McGregor and Ryan Christie who both had loan spells and came back to claim first team regular spots.

“ Now that it’s over the line I can’t wait to be part of this squad, and to say that I’m a Celtic player is a dream come true” Greg Taylor after he is reborn and signs for Celtic