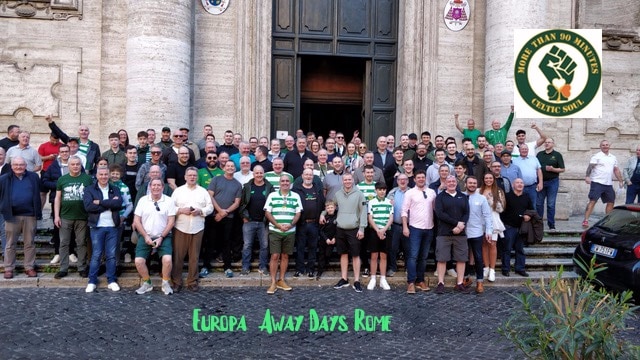 I arrived in Rome yesterday and as it was my first time in the city went to see the famous sights. I only bumping into small pockets of Celtic fans on my travels. The city is large and full of historical interest and many fans are not missing the opportunity to embrace the culture, food and hospitality.

Paul the Tim and many other fans were down the Vatican for the Popes regular Wednesday gig. I am not a religious person but its always good to see the Pope adding another Celtic top to the Wardrobe, fair play Paul don’t mind the begrudgers.

Last night Celtic fans packed out Irish Bars and a sold out gig organised by Leftwing Badges and enjoyed the bands and musicians who had traveled from Glasgow and Ireland.

I was out and about again myself last night seeing the sights and bumped into more Celtic fans, many choosing not to wear colours. There is a real international feel to this game with Celtic fans not only travelling from Scotland and Ireland but I’ve bumped into fans who have travelled from Germany, England, USA, Australia, Japan and Russia.

After a chance encounter in a café with Dennis a Russian national who follows Celtic around Europe, I did an interview with him which will appear in issue 106 but the bottom line is he can travel around Europe following Celtic but has never been to see them in Celtic Park because of British visa issues. The bhoy has been everywhere to see Celtic so hopefully we will see him in Glasgow soon as he hopes to get a visa sorted in January.

This morning Celtic fans attended a special mass in the Vatican and we also woke to the news that 2 Celtic fans had been attacked and stabbed outside an Irish pub by masked Lazio fans but now the word is that they are not critical, and one may have been stabbed in the leg. Thank god for that I hear you say. The quick action of the staff at Flann O’Briens pub made sure that the Celtic fans enjoying a drink inside were not assaulted.

Today is the big day, Celtic have issued all fans who have travelled with safety guidelines, so lets hope we can all stay safe, enjoy the occasion and get a famous away victory although I’d be delighted travelling home with a point in the morning.