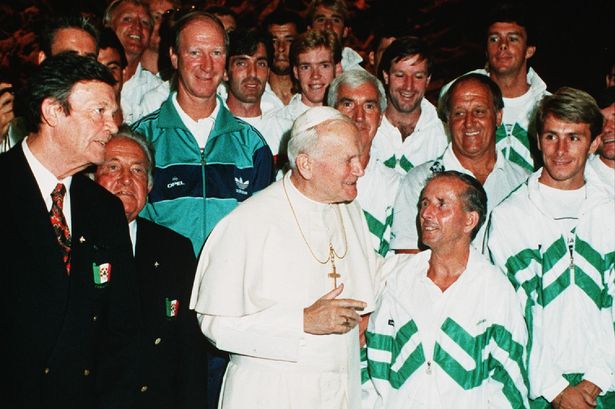 I asked Gerry Peyton to join me on the Celtic Soul Podcast to pay tribute to Jack Charlton but I learned so much more from Gerry about how he carved a career as a goalkeeper coach after big Jack recommended him for his first job in Japan. In Japan he noticed a quality player, who could take decent free kick, Shunsuke Nakamura. Gerry is now back coaching in Japan after being part of Arsene Wenger’s back room team at Arsenal.

Gerry done so much more within the Ireland set up than keep goal, he was involved in coaching the underage teams. From a Celtic point of view Gerry was Packie Bonner’s room mate when on Ireland duty and they had a great relationship. Speaking to Gerry reminded me of chatting to John Fallon about his relationship and friendship with Ronnie Simpson.

Gerry was born in Birmingham after he parents met over there and married after both emigrating from Mayo and Galway. He remembers fondly his summers on holidays in the West of Ireland, working on the family farm and growing up playing Gaelic, Football and Cricket in Birmingham.

After making his debut for Burnley within a year he made his debut for Ireland after Johnny Giles who was then Ireland manager contacted his Dad about him declaring for Ireland and how proud he made his parents when he pulled on the Ireland jersey that first day and for the next 16 years every time he was involved in the Irish set up.

The comradery within the Ireland teams has been well documented over many years but Gerry tells it from the heart and about the quality players that were in the squad and how they got results.

In his own words he pays tribute to Jack Charlton in a heart felt way, telling the story of playing in Jack’s debut and how direct, loyal and straight Jack was. Listen to the Podcast and hear how Jack Charlton prepared the Irish boys to beat England in Euro 1988 and hear how he prepared the goalkeepers with some shooting practice.

Jack had his way and that was the only way but it was successful and Gerry talks about some of the stats about how Ireland seldom lost the ball in midfield at the World Cup. Gerry lists off the great Irish players who had all won trophies in England. A team of winners, who could play football and gave such a tough game to the Dutch, maybe the greatest ever Dutch team in 1988 and maybe the players didn’t get the respect of just how good they were and how they played for each other as a unit.

Jack could man manage and he knew how to handle each player and was very honest you knew where you stood. If you were not in the first 11, there would be no sulking or sucking energy out of the team and that’s the way it was the whole squad was important on and off the park.

It was a delight to hear him chat about how Jack got the Irish culture and would make sure the ballads were blasted out on the stereo to get the players up for representing their country and also how Gerry and Packie spent hours chatting about penalty shoot outs and how penalty takers would step up and the high of watching Packie execute it against Romania and then they went onto Rome to meet the Pope and play the Italians. Having grown up in an Irish house and knowing how important the Catholic faith was to his parents  They were so proud when he brought home a picture to his parents with him and John Paul and when he told them he chatted to him about the Pope’s own time as a goalkeeper.

It was also good to hear about the years and campaigns with Ireland before Jack was manager and his time at Arsenal with Arsene Wenger.

A brilliant interview that will appeal not only to Ireland fans but the wider Irish diaspora from Glasgow to New York.