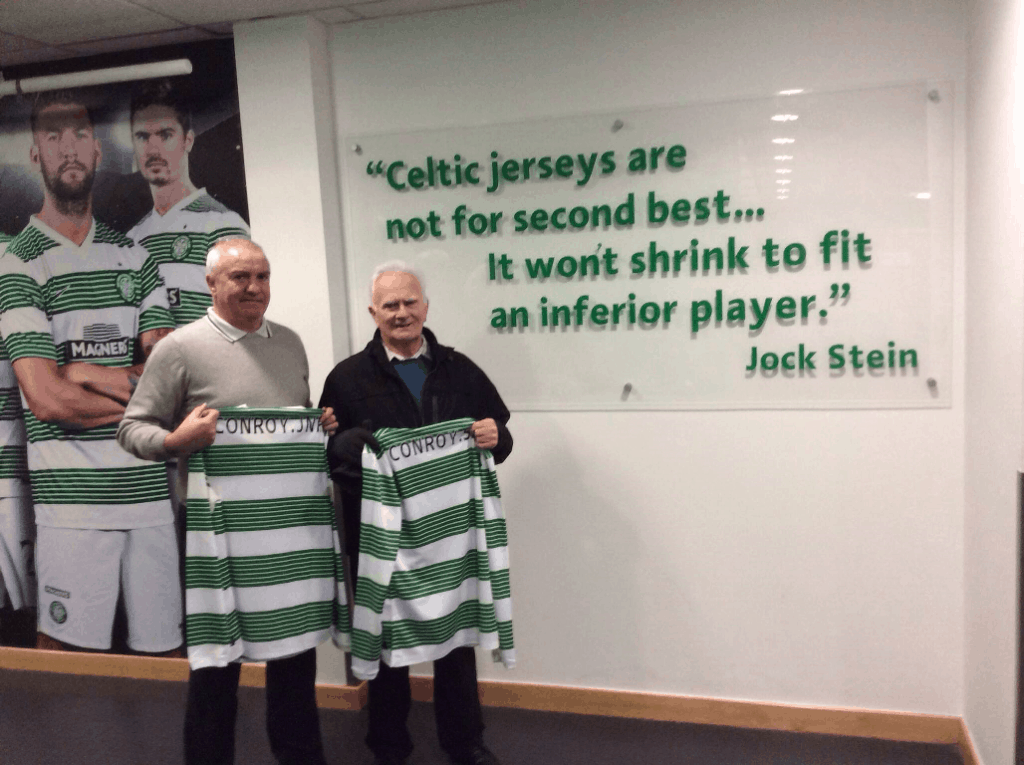 It is rare for fathers and sons to play for the same football team. There are reasons for this, mainly the fear of comparisons. Bobby Lennox, Joe McBride and Steve Chalmers all had sons who played professional football, but not for Celtic. Kenny Dalglish’s Paul did sign for Celtic, but did not last long, and Jimmy McGrory’s son; Jimmy junior opted to play rugby instead. He inherited his father’s broad shoulders and he would have been brilliant, one imagines in the scrum

But several fathers and sons did play for Celtic. Take first of all Patsy Gallacher. Patsy played for the club between 1911 and 1925, and is generally reckoned to have been Celtic’s best ever player. He won the Scottish League in 1914, 1915, 1916, 1917, 1919 and 1922, and the Scottish Cup in 1912, 1914, 1923 and famously in 1925 when he levelled the score with an overhead somersault with the ball wedged between his legs. He dribbled, he shot, he scored goals, he mesmerised, he tantalised, he entertained and there was little on a football field that he could not do. He brightened up the hearts of the fans at a time when they needed brightening up, and those who saw him will admit of no other contention that he was the best of them all. My father, when seeing men like Puskas and Pele on TV and hearing them being praised to the skies, would hold up his hands and say, “Look, I saw Patsy Gallacher!”  – And that was the end of the discussion.

His son Willie also played for Celtic in the dark years immediately after the Second World War. Patsy was not keen on him playing for Celtic (his other son Tommy played for Queen’s Park and Dundee) but Willie ignored his father’s wishes when Celtic came calling. He was an honest trier, but that was about all that one could say about him. In the “relegation” battle of 1948 at Dens Park, Willie played for Celtic, Tommy for Dundee and Patsy sat in the stand. Willie might have been a better player but for the Second World War which disrupted everything

Related to the Gallachers were the Divers. There have actually been three John Divers who have played for Celtic. The one who played in the 1890s (and was involved in the strike of 1896) was no relative of the other two. He can be called John Divers I. John Divers II was the nephew of Patsy Gallacher in that Patsy’s sister Madge had married John’s father. John Divers II was a great player, and played in the team that won the Scottish League in 1938 and in the Empire Exhibition Trophy team of that summer in the forward line of Delaney, MacDonald, Crum, Divers and Murphy. John would have won a great deal more but for the Second World War, but then again as he always said, “The War destroyed an awful lot more than my career. Other people lost a great deal more than I did”

And then we come to John Divers III. A Kelly Kid of the 1950s, and certainly capable of some visionary football, but his career was largely one of unfulfilled promise. It was not entirely his fault for Celtic in the late 1950s and early 1960s was a crazy organisation some time with team selections particularly erratic. I recall a great goal scored at Aberdeen in February 1964 – a swivel and shot form the edge of the box – which showed what he was capable of, but he suffered from a blood flow condition which slowed him down and exhausted him. His premature baldness made him look older than he was. He did not last long under Jock Stein, but he still has the honour of scoring the first goal of “nine in a row” at Tannadice in August 1965. He became a teacher in Dumbarton.

We have had two Michael Conroy’s. Senior made a few appearance in the 1950s without ever setting the heather alight, but junior had his moment of glory in the 1980 Scottish Cup final when, with both Tom McAdam and Roddie McDonald unavailable through suspension, Michael Conroy, normally a midfielder, teamed up with Roy Aitken to prevent Rangers from scoring. It was his finest hour of a rather underwhelming career, although he was also one of the ten men who won the League in 1979, albeit he was substituted before the end. He won a League medal for that, and also another in 1981 before he departed the Hibs.

And we have had two Gordon Marshalls in the goal. Senior played only a few games for Celtic in 1971/72 at the end of a long career, particularly with Hearts for whom he starred and was generally considered to be one of the best in the country. His son, Gordon Marshall Junior played longer in the early 1990s, but can consider himself to be unlucky to have come to the club at the wrong time in their history. He played in the awful Raith Rovers League Cup final and was blamed by some for his part in the Raith Rovers equaliser. He went on to play for other clubs as well, notably Kilmarnock and Motherwell.