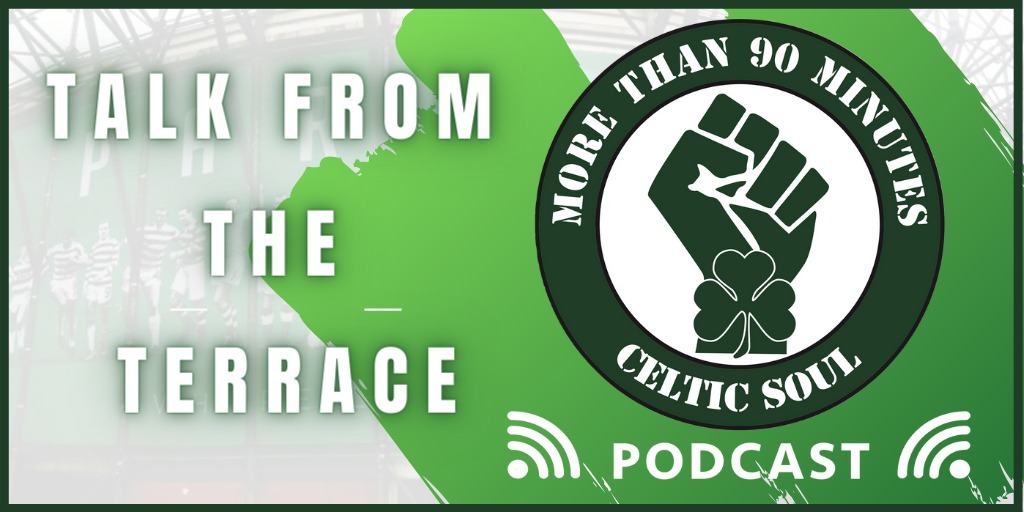 More than 90 Minutes Editor, Andrew Milne welcomes back Matt McGlone, Editor of the Alternative View for a catch up on Talk from the Terrace show on the Celtic Soul Podcast. The Bhoys look back on Sundays Glasgow Derby v the Rangers.

Celtic shared the points on the day to keep their 6 points-gap from their nearest rivals with 3 games to go and a healthy goal difference of 19 as we go into Saturday’s game against Hearts at Celtic Park in another lunchtime kick off which the Bhoys preview.

The Japanese factor is discussed and the rotation of Rogic and O’Reilly and the differences offered by Kyogo and Giakoumakis leading the Celtic line.

Hearts have secured their place in Europe and are guaranteed third place which would have been their target at the start of the campaign, and they have a Cup Final to look forward to. Maybe they will have one eye on the Cup but for us it’s all about the Celtic because the title has still to be won.

The Rangers will play Sunday at 3pm against Dundee United at Ibrox. The visitors have a European place to battle for with Ross County and Motherwell so should be well up for the game.

Mark Lawell has been announced as Head of Scouting and Recruitment this week and the bhoys discuss his arrival and Ange Postecoglou’s reaction to his latest recruit who he has worked closely with before.

The bhoys also discuss the pro and cons of Celtic fans at Ibrox and the FC Statement fans at Celtic Park. As the transfer window approaches, Matt looks back in time to the transfers of Davie Hay, Kenny Dalglish, Kieran Tierney, and the departure of Henrik Larrson to Barcelona.