Home / News / Take Me To Your Paradise – Perfect Summer Reading

Take Me To Your Paradise – Perfect Summer Reading 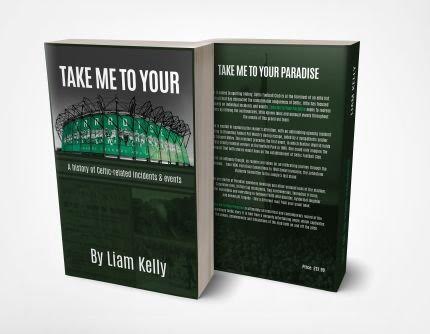 Take Me To Your Paradise looks at the history of Celtic from a very unique angle, focusing on individual incidents and organised events that have taken place throughout each decade of the club’s existence. It relives the controversies, little known tales and unusual events throughout the annals of this grand old team.

No time is wasted in capturing the reader’s attention, with an astonishing opening incident relating to (Founding Father) Pat Welsh’s daring escape after the Fenian Uprising, aided by a sympathetic soldier named Sergeant Maley. This incident precedes the first event, in which Brother Walfrid holds his first charity football venture at Barrowfield Park in 1886. One could only imagine the impact that both stories would have on the establishment of Celtic Football Club.

It’s not all antiquity though, as readers are taken on an enthralling journey through the decades… from 1896 Irish Race Conventions to 1968 Soviet invasions, the Johnstone Vigilante Committee to the Jungle’s last stand. There are stories of Paradise speedway meetings and other unusual uses of the stadium, Cappielow riots, British Cup champions, flag controversies, Tannadice U-turns, The Invincibles and everything in-between! With wild disorder, hysterical laughter and downright tragedy – this a different read from your usual book.

Take Me To Your Paradise is ultimately an historical and contemporary record of the extraordinary Celtic story. It is told from a uniquely entertaining angle, which captivates the values, achievements and tribulations of the club both on and off the pitch.

Hailing from an Irish background, the author, Liam Kelly grew up in Bournemouth with the good fortune of watching Celtic during the Martin O’Neill era. Still living on the south coast, he now has a season ticket at Paradise and also travels to European away matches when possible.

At the age of 19, he published his first Celtic book – Our Stories & Our Songs: The Celtic Support, which focused exclusively on the Celtic faithful throughout the club’s history. Then, last year, he published his second book – Take Me To Your Paradise: A History Of Celtic-Related Incidents & Events, which has now sold out in Waterstones, Official Celtic FC stores and Calton Bookstore. It is, however, available on Amazon at the following link: www.amazon.co.uk/gp/product/1700120271/

Liam Spoke to us at Celtic AM at our pre-match event in Malones, Glasgow last season.