Sure It’s A Grand Old Team to Play For 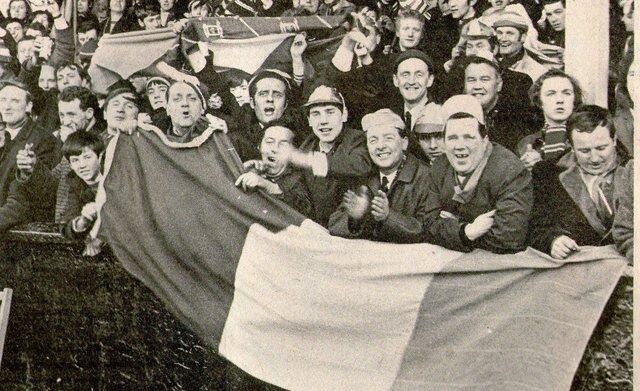 It is remarkable to think that we have had 60 years of “Sure It’s A Grand Old Team to Play For”. It was released in October 1961 and sung by Glen Daly, and very soon it became a recognised Celtic anthem. It has not been imitated all that much by supporters of other teams, although occasionally on TV, you hear it being played on the PA at Everton games (although not really sung by their fans).

But it has now been a traditional part of the Parkhead Matchday experience for a long, long time, even though one would have to admit that some of the lyrics are crass. Is it, for example, true that “we don’t care if they win, lose or draw”? I think not. One’s weekend and midweek in the football season, are, and should be, defined by how well Celtic have done! You cannot really call yourself a Celtic supporter otherwise. And what does “Darn the hare we care” mean. Is it “hair” or “hare”, in any case?

But it is a cheery song, with a beginning like “76 trombones led the big parade” , a hit in about 1959 or 1960. So who wrote it? I have heard various pretenders for the throne, notably a reserve player called Eddie Dowdalls (a relation of the trainer Alec) who claimed to have written it on a bus on the way to a reserve game at Cowdenbeath. But there are other claimants as well. It certainly seemed to have come together in that awful summer of 1961 (just after the Dunfermline Cup final) and Glen Daly released it in the autumn with, on the other side, “An Irishman’s Dream” about Ireland moving to the USA with Shannon becoming like the Hudson, every girl being an Irish colleen and other lovely romantic stuff. It was an old pub favourite, just like “If We Only Had Old Ireland Over Here” which was the Australian version of it. Everyone had a father, uncle or grandfather who could be relied upon to reproduce it, (with a greater or smaller degree of musical harmony) every New Year.

Its success was immediate. By early November 1961 it was being sung hesitatingly by a few guys struggling for the words, but by December, it was beginning to resound around Parkhead particularly in a game where the team beat Partick Thistle 5-1. A couple of weeks later, when Hibs came to town and Celtic won a thriller 4-3, everyone was word perfect, more or less, although from an early stage “We don’t care what the Rangers say” had displaced our apparent indifference to the result. A couple of days before Christmas, the good people of Kirkcaldy saw the train doors opening and green and white hordes jum

It was all possibly coincidence, but the team enjoyed a good spell at this point. Indeed December 1961 made one believe that there was indeed “going to be a show”. Well yes, there was, some 5 and a half years later in Lisbon, but in late December 1961 Celtic suffered a bad blow or two with the weather. The game at Motherwell was frosted off as indeed was the New Year Day game at Celtic Park which might have been a pivotal one, and all this played havoc with the nerves of our talented but young and fragile side, which had been on the crest of a wave up to now. Dismal draws now became the order of the day and although spring 1962 was not without its fine moments, the team disappointed at the end and even the song could not lift them up.