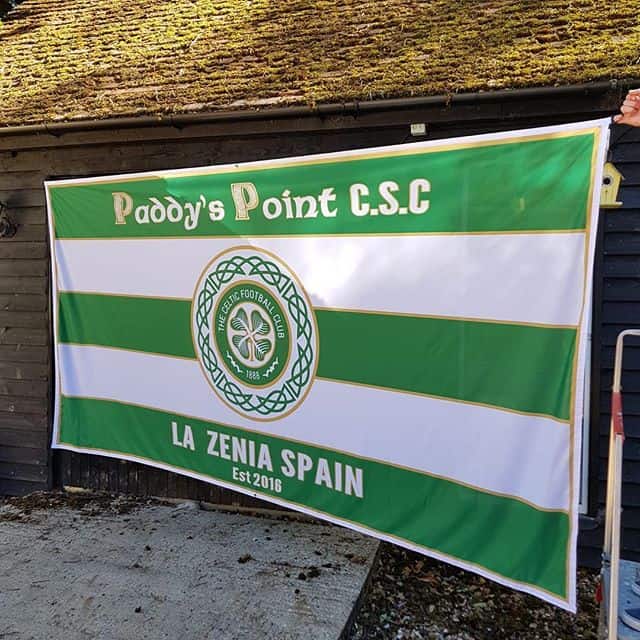 This evening in Estonia Celtic take a 5-0 first leg lead over Estonian champions, Nomme Kalju. Champions League nights are always special in Paradise but getting to experience a new city, country and culture is a real treat for Celtic fans and those lucky enough to be there tonight will enjoy themselves.

The posts started on social media on Sunday when the first of the fans arrived and the famous Paul the Tim was the first to check in on Facebook. My club mates from St. Margaret’s set out on their travels in the early hours yesterday from Dublin airport and More than 90 Minutes away days columnist Scott Crystal arrives this morning to cover the game and the adventures of the fans for issue 105 (out Aug 24 for Hearts at home)

I am enjoying a sunshine holiday in Spain and like last week for the home leg I will be going to Paddy’s Point pub situated in La Zenia on the Costa Blanca,

to join with other holiday makers and the members of the Paddy’s Point CSC who made me feel really welcome last week not for the first time this year as they also looked after us in February when we travelled on their supporters bus for the Valencia away game.

Last week the owner of the pub Rory presented me with the club T-Shirt which was a lovely gesture and one I will wear with pride on my travels to see Celtic this season. He got a nice present himself when a holiday regular brought him over a signed jersey by the treble treble winners which will hang proudly along with the various other framed jerseys which adorn the walls.

Last week all the goal scorers were cheered loudly in the packed pub, Ajer, Christie (2), Mcgregor but the biggest cheer of the night was for the returning Leigh Griffiths. He was toasted late into the night by the Celtic fans, both holiday makers and those who have made Spain their permanent home and have created their own part of Paradise in Paddy’s.

Tonight’s game should be a formality and we may get to see some squad players getting a chance to catch the eye of Neil Lennon with tougher assignments in Europe around the corner and a 9th league title to win and 2 cups to be defended, every player will have his part to play.

Celtic TV will show the game worldwide in the absence of the Satellite broadcasters who were not prepared to pay for the game and in the process leaving many subscribers disappointed. Remember folks its an early evening kick off 6 p.m. Celtic Park time.

If your in Estonia enjoy the trip, post loads of pictures on social media, let us know how your trip went, enjoy the game and stay safe and no doubt when the final whistle has been sounded Celtic fans will be checking to see if Romania or Israel will be our next destination to cheer on the Bhoys and then it will be straight onto airline and hotel websites to map out the next trip.

Andrew Milne started More than 90 Minutes in 2001. He has written for numerous publications and online about Celtic. One of his essays featured in Celtic Minded 2 and he is a former newspaper columnist with the Daily Ireland and the man behind celticfanzine.com. He is host of Celtic AM pre-match events at Malone’s in Glasgow on match days and follows Celtic Home & Away. He is a season ticket holder for Celtic FC and the Republic of Ireland. He is also St. Margaret’s CSC PRO, a member of the Celtic Trust and Celtic Graves Association.