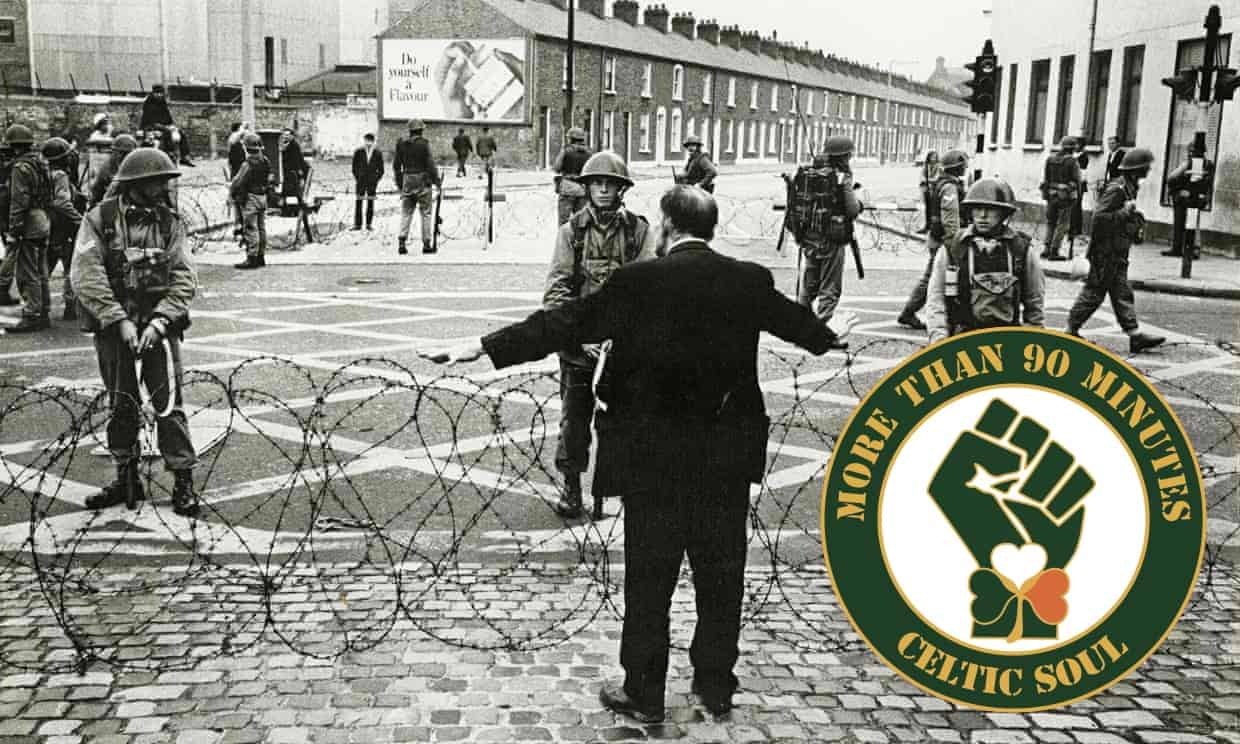 It was a long hot summer in 1969, the Beatles were walking across Abbey Road, the Viet Cong were crossing the Mekong Delta after the Tet offensive and the Battle of Hamburger Hill, Neil Armstrong was taking ‘one small step for man, one giant leap for mankind’, and playing a bit of golf on the Lunar planet, Jan Palach immolates himself in Prague, Gaddafi takes over Libya, Honduras and El Salvador go to war over a football game, Joe Cocker and Jimi Hendrix perform at Woodstock, Monty Python creates mirth on the box, Native Americans protest on Alcatraz, Jackie Stewart won the Grand Prix and Tony Jacklin ‘the Open’, Kerry won the All Ireland and I was there amid 90,000, and on the streets of Belfast and Derry there was mayhem, it was the summer of ’69, unforgettable, life changing, and Celtic came into my life.

On the 14th May 1969 just after I had just ended my school days prematurely after ‘O’ Levels, I made my first ever trip to see Celtic play in a friendly in Dublin v Shamrock Rovers, about twelve of us took the train from Belfast to Dublin and made our way to Tolka Park in Drumcondra as part of a 10,000 crowd to see the European Champions of just 2 years previously, League winners for the previous 4 seasons and fresh from a 4-0 thumping of the Teddy Bears just 18 days previously in the Cup Final. ‘Cesar’ ended the Rangers career of one Alex Ferguson with a 2nd minute header, he mightn’t have been a great player but he wasn’t a bad Manager!.

So there we were a dozen feral youth from West Belfast getting out of that God forsaken part of the world for a few hours to witness the Hoops in the flesh for the first time, 6 of the European Cup winning team were playing, Jinky, Wallace, Chalmers, Auld, Craig and John Clark, and a sprinkling of the Quality Street kids, Connelly, Gorman, Hay and Macari starting with Dalglish and McGrain on the bench, it was as good a team we would ever see in our lives, Harry Hood scored and two from Willie Wallace sealed the victory as the crowd and our young selves were in our element, Man U, Liverpool and Spurs could go to hell this was our team.

51 years later through all the ups and downs it still is. We enjoyed that night in Dublin, maybe a little too much with our 6 packs of dumpy bottles of Harp, so much so that we missed the last train back and had to crash out on benches at Connolly station, probably as comfortable as James Connolly himself was on that stretcher down the road in the GPO in 1916. Back in Belfast all we could talk about was this great Celtic team, it was all Georgie Best before that night but now Jinky was the man, twisting and turning, he was the equal of Best but of course without the good looks that attracted Miss Worlds.

There was other talking points in Belfast that summer of ’69, Partition which had been in place since 1920 was becoming frayed at the edges, attacks on Civil Rights marches in Derry and Burntollet had increased tension in the artificial statelet and the summer marching season brought a foreboding of serious sectarian unrest which would be fulfilled in the extreme, football would be the last thing on our young minds for the considerable future.

Ironically for the previous 4 years the dozen of us had travelled across the city to watch Glentoran in the Irish League, one friend was from that side of the city originally and planted the idea, Linfield were down the road from us just across the Motorway but there was no way we could support ‘the Blues’, the Belfast equivalent of Rangers with the same policy of not playing Catholics, flying the Union Jack and playing God Save the Queen, their fans Rangers men to the core would parade through the city every Saturday singing their sectarian shite and at times causing riots when passing nationalist areas.

Windsor Park was a no go stadium for nationalists, it was dangerous and had always had been since the 1920’s and famously in 1948 it ended the football life of the greatest football club ever in Ireland, Belfast Celtic, as Linfield fans invaded the pitch and broke the leg of Jimmy Jones the Celtic centre forward, ironically a Protestant himself, the IFA a Unionist institution itself refused to take action against Linfield and the Celtic Directors withdrew the club from football never to play again, we used to pass the old Celtic Park stadium on our way to Internationals at Windsor, it was only a stones throw away, excuse the pun, sadly now turned into a shopping centre although a museum is in now in the centre!.

Anyway for 4 years we would cross the city to East Belfast in the shadow of the shipyards, H&W who were a dab hand at building big ships which couldn’t detect an iceberg at two miles. The Glentoran support were 90% loyalist but in the 4 years that we went there we never once had any trouble from anyone and they all knew we were young nationalist kids from the West of the city, we were probably on a cross community gig before it became fashionable and without the Grants.

There was actually a great analogy between that Glentoran team and the Celtic team of the previous 15 years, both had played second fiddle to their cross town rivals for a decade and more, Glentoran hadn’t won the league from 1953 till ’64 as Linfield ruled the roost, similarly Celtic had no League title from ’54 till ’65 as Rangers controlled affairs, but as at Parkhead with Jock Stein arriving to bring unrivalled success, John Colrain, a former Celtic prodigy and one of the ‘Kelly Kids’ in the late 50’s, arrived at the Oval and transformed their fortunes and made them the top team for a decade, even drawing twice with Benfica in the European Cup the year Man U beat them in the final in ’68, 1-1 in Belfast, 0-0 in Lisbon, just losing on away goals to the Eusebio inspired ‘Eagles’!

We would go to games at the Oval for the next few years until 1969 when the stirrings of the modern conflict made it impossible to cross the city, but as I said we never had any trouble from the loyalist kids we got to know, in fact the only trouble would be when we joined with them to battle the Linfield fans, how ironic. I’ve always thought about those kids we met at the Oval, like many on our side of the city getting involved in armed struggle, they probably got involved in the UDA/UVF and other loyalist paramilitaries in the East, as the summer of ’69 evolved football would definitely be placed on the back burner.

50 years ago my life changed forever, in Derry the Apprentice Boys parade led to the ‘Battle of the Bogside’ as nationalists fought the RUC to a standstill, in Belfast loyalists attacked the Falls and burned Bombay Street and others to the ground as the guns came out, our young lives would never be the same again, when we should have been playing football, going to football games, watching football, we were suddenly in the midst of conflict which would last for 30 years, foreign troops had landed on our streets as it evolved from civil disobedience to armed struggle, to paraphrase the old saying, ‘when we had nothing we had Celtic’,.

In the early 70’s we still had Celtic but it was difficult to even get to matches, crossing the sea from Larne to Stranraer was frought with danger as the Rangers hordes were in greater numbers, once for the ’71 Cup final they wouldn’t let us on the boat, eventually we got on but it was scary and only for Scottish cops we were in real danger, previously they had to turn a ferry around as battles raged on the boat, it would have been safer facing the iceberg on the Titanic.

Still if you want something bad enough and have the determination then nothing can stop you, a few months later in November I made it to my first ‘real’ match as Celtic played Benfica in the EC, I’ve written about it before, it was a magical night and imprinted in my memory, we were 3 months into the ‘Troubles’ that quaint Irish euphemism for murder, mayhem and slaughter, it would effect my Celtic ‘career’ for a decade, but like the old saying, ‘we always had Celtic’, it’s been a constant in my life ever since and probably always will be, it’s been a long time since that mad summer of ’69.

I’ve seen a lot of life, inside and outside football, conflict and death to friends, but also great moments of joy in Paradise, Leeds and 135,000 at Hampden, 9 in a row, Johnny Doyle against Real Madrid, 9 men winning the League, the Centenary Cup Final and the mad witch Thatcher at Hampden, 17 penalties at Hampden and fellow Belfast man Anton Rogan in tears, the alternative 9 in a row for the ‘Bears’ and the mad day at Paradise when it came close to mayhem, the new Paradise and eternal debt to Fergus, the Martin O’Neill years, Champions League and Handel’s Zadok the Priest, Seville and Henrik, Man U, Barca, Bayern, Milan, Man City, Ajax, Liverpool and  Juve put in their place at Paradise, Strachan, Rodgers & Neil Lennon, 8 in a row, the first two decades of the new Millenium have been good to Celtic, allowing for Lisbon have we ever had it so good?