Smiler – Jewel in the Celtic Crown 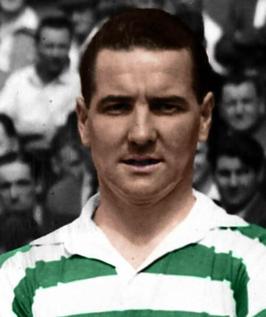 One can never say such things with any kind of certainty, but one would feel that Neil Mochan must be unique in world football for having won two winners’ medals with a club before he played a game at its home ground! Yet this was what happened in spring 1953 when “the Smiler” joined Celtic and, four games later (all played at Hampden), he was the proud possessor of two medals. Indeed, in these four games, he had been largely responsible for Celtic winning the Glasgow Charity Cup and the Coronation Cup!

1953, not to put too fine a point on it, had been dreadful for Celtic. Not without good players – Stein, Fernie, Collins, Peacock, Tully and a few others, but simply poorly led and with a Chairman still rather too obsessed with his recent triumph over the SFA over the flying of the Irish flag. He had won that battle in 1952, and that was fine – but what supporters really need is success on the field. 1953 had not produced that and the domestic season effectively came to an end as early as March 14 1953 when the team went tamely out of the Scottish Cup to Rangers at Ibrox.

But then Celtic signed Neil Mochan. It would be fair to say that he was not exactly a household name in Glasgow although he had played for Morton between 1944 and 1951. His last two years had been none too successful with Middlesbrough. Although he was undeniably Celtic daft, we were spared all the “it’s a dream come true” stuff, because the transfer for £8,000 was announced in the morning papers of May 9 1953 along with the statement that he would probably be playing in the Glasgow Charity Cup final this afternoon against Queen’s Park. Indeed he was. 40,000, a remarkable crowd, turned up to see Celtic win 3-1 and new boy Mochan described as “a new jewel in the Celtic crown” scored twice. So Neil now had a medal, little more than 24 hours since joining the club.

And he got another one 11 days later. This was the all-British Coronation Cup to celebrate the Coronation of Elizabeth II in June 1953. All games were to be played in Scotland, because London was too busy with the preparations. 4 were invited from England and 4 from Scotland. Celtic were only there because they had a big support. It was a situation not without irony that Celtic won the competition – beating Hibs in the final – when it was “meant” to be a final between Rangers and Arsenal, the two royalist establishment clubs. But Celtic beat Arsenal 1-0 on Monday May 11 to the astonishment of all. Mochan played well but it was Bobby Collins who scored the only goal of the game. 59,000 stood in amazement and watched Celtic, who had won finished eighth in the Scottish League beat the English League champions! Had Mochan made all that of a difference?

Well, yes he had, and on Saturday May 16, Celtic did it again, beating this time Manchester United, and Mochan scored a goal, picking up a lofted ball from Charlie Tully and running on to score. And then the final against Hibs, Mochan scored the first goal, a 30 yard drive which Eugene MacBride, the renowned Celtic historian likened to a shot of Andy McAtee while The Glasgow Herald goes even better and talks about McGrory. It was then – dare one use the word? – “lockdown” – time as Jock Stein and Johnnie Bonnar kept Hibs at bay, until Jimmy Walsh got a goal late in the game to make it 2-0.

So there we are! Two medals within 11 days and he had not yet played at Celtic Park! He became a fans’ favourite for his famous left foot, yet he wasn’t always loved by Mr Kelly. For example he missed the Scottish Cup final and its replay of 1955 – and Celtic lost. Yet he played in the 1954 Scottish Cup final, and the two Scottish League Cup finals of 1956/57 and 1957/58 – which Celtic won! Can anyone spot a pattern here?

And of course, there was a lot more than that to come from the Smiler!