Seven of the Best…..at Ibrox 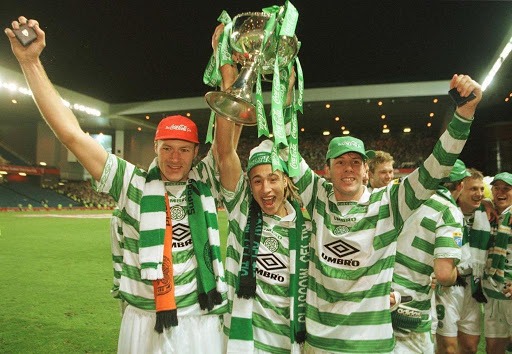 So, why do we not like Ibrox? It’s a fine stadium, not all that difficult to get to, parking facilities not bad, pies OK – but they tell me the natives aren’t all that friendly, and the tickets are expensive. I don’t really know, for I haven’t been there for years. And yet, we have had some great games there – quite a lot in recent years, but also some from long ago. Here are a few! I could have chosen a lot more, but the number 7 has its attractions.

Scottish Cup final 1892 April 9 Celtic 5 Queen’s Park 1 – Celtic’s first ever Scottish Cup win. This was actually a replay of a game played a month earlier which was badly disrupted by crowd encroachment at a packed Ibrox. In an attempt to reduce the crowd, the price of admission was raised to an astronomical 2 shillings (10 pence!) which meant that many Celtic supporters simply couldn’t afford the entrance fee. There were enough though to see Johnny Campbell and Sandy McMahon score two each and these, along with an own goal, were sufficient to start the biggest street party that the East End of Glasgow had ever seen. Some say that Sandy McMahon scored three – which would have made it the first ever Scottish Cup final hat trick.

Scottish Cup final 1900 April 14 Celtic 4 Queen’s Park 3 – commonly known as the Hurricane final because of the strength of the wind blowing from the west. Celtic played with the wind in the first half, and were 3-1 up at half-time with goals from McMahon, Divers and Bell. Queen’s Park came back in the second half, and scored twice, but Divers had scored early on in the second half against the wind. It was Celtic’s third Scottish Cup triumph, and this game marks the end of Queen’s Park as a major force in Scottish football. They have never since appeared in a Scottish Cup final.

Scottish Cup quarter final 1907 March 9 Rangers 0 Celtic 3 – Glasgow had been talking of this game for weeks. It was ironic that Jimmy Quinn who had been unjustly suspended for two months in the New Year game against Rangers, found himself playing against Rangers at Ibrox in his first game back. Would Rangers target Quinn? Yes! Would they goad him into retaliation? Well, they tried but Jimmy didn’t rise to it; Did they prevent him from scoring? Yes…but they seemed to forget that Celtic had other players as well, and Davie Hamilton, Alec Bennett and Jimmy Hay scored the goals in a very easy victory. The only threat to Celtic came in a snowstorm near the end. Celtic would go on to win a League and Cup double that year.

Scottish League 1908 March 25  Rangers 0 Celtic 1 – Willie Maley celebrated his 40th birthday and Celtic celebrated winning the League to add to last week’s Scottish Cup en route to winning everything. Jimmy Quinn was hacked mercilessly, and could not finish the game, but at full time after Alec Bennett had scored the only goal of the game, Jimmy ostentatiously limped across to the Rangers players and offered them his hand. He did not have to boast or show off. He knew he was the greatest man on earth in 1908. Celtic had now won the League four times in a row and eight times in total.

Empire Exhibition Trophy 1938  June 10 Celtic 1 Everton 0 aet – Until the 7-1 game and Lisbon, this was Celtic’s best ever triumph as they won this all-Britain competition one sunny Friday night in Govan, where they had also beaten Sunderland and Hearts en route. Tonight’s game was very even but eventually in extra time Johnny Crum scored the only goal of the game, and then ran to the crowd to do a Highland fling to celebrate. It was a great way to celebrate 50 years of Celtic history.

Scottish League 1967  May  6 Rangers 2 Celtic 2 – As in 1908 the only other year that Celtic have swept the boards of winning every competition they entered, the League was won at Ibrox! This time the rain was incessant, and both teams played well in what was a genuinely clean and sporting game of football, finely balanced with a late winner a possibility at either end. Each team scored a brilliant goal and a scrappy goal, both of Celtic’s coming from Jimmy Johnstone. The draw was enough to give Celtic their 22nd League Championship.

Scottish League Cup final  1997  November 30  Celtic 3 Dundee United 0 – This game must not be under-estimated in Celtic history. Celtic had started the 1997/98 season reasonably well, but needed something tangible. Their 10th Scottish League Cup provided just that. Things might not have been so good for Celtic in their attempt to stop the 10 in a row  in 1998, if they had not won this game, but Mark Rieper, Henrik Larsson and Craig Burley produced the goods in what was eventually a very easy victory over Dundee United who could not overcome their traditional problems concerning playing in Glasgow.

So there we are. Seven of the best and that is without even touching the 21st century! We’ve had a few good wins recently as well involving Moussa Dembele, Odsonne Edouard and others. So let’s look upon that fine stadium called Ibrox with a little affection and respect…OK then, perhaps not! But it is not without its happy memories!