After Thursday nights game I wrote an article titled Europa Nights for the website. I was buzzing from the result and performance but I was disappointed to see some of our own fan websites who were not at the game lifted half time footage from social media of Celtic fans being beaten by Swedish Police with Batons and making up sensationalised headlines some even blaming Celtic fans.

Celtic fans are no angels but generally we don’t get much hassle from the local Police when we visit foreign lands, in fact we probably get more at home from Glasgow’s finest. Much of the hassle in Scotland came after the introduction of the OBA which thankfully was defeated by FAC.

How could I comment on what happened at half time when I watched the game from the comfort of my sofa. So unlike others I waited to speak to fans who were at the game. Yesterday I got to speak to Dixie ( Left Wing Badges) a fellow member of St. Margaret’s CSC. It was he who posted one of the videos so he was there and thankfully he told STV, the Press Association and others where to go when they asked about using the footage and fair play to him he told us that we were the only Celtic fan website to ask for permission to use the footage. 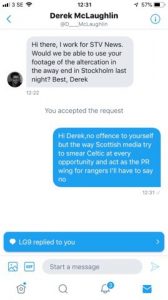 “During the half time break security entered our section of the stadium and headed to an area behind the Green Brigade banner I made my way towards that section, by the time I got there (30 seconds) there seemed to be a stand off, then out of nowhere security started to use their batons again with a line of them ensuring no one could assist the fans being attacked. After a bit there was a pause, and some Swedish lads spoke to the security. We then spoke to security in front of us and we asked why are the batons being used? From their reply I think they had checked CCTV and were trying to identify the pyro lads but no one was arrested they took away some flag poles and then the security retreated from the section”

It’s worth noting folks that some of our own fans who run blog and websites are just acting as another wing of the main stream media who will never let the truth get in the way of a sensationalised Headline.