Home / Celtic AM / Rudi Vata – The Celtic Story Like No Other 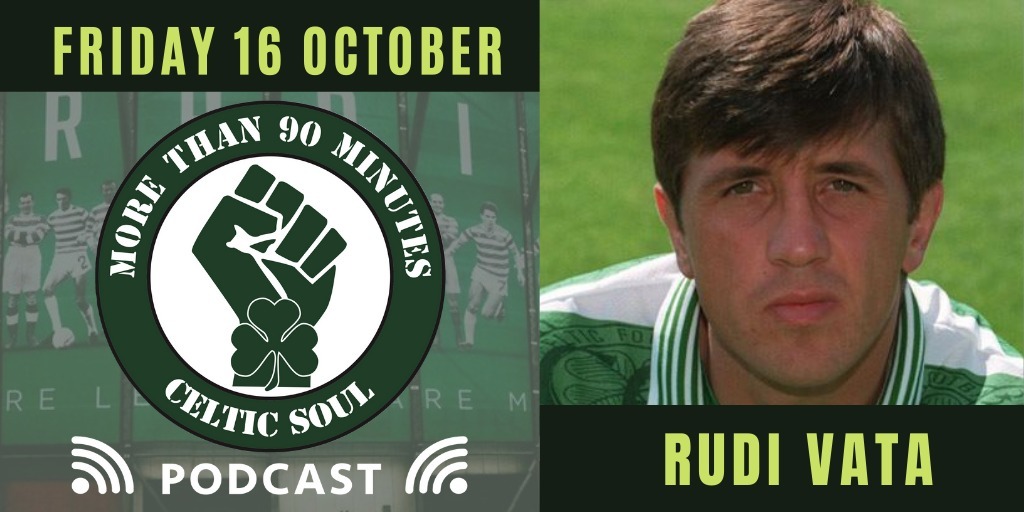 Rudi Vata was signed by Liam Brady in the summer of 1992 in Dublin after a man of the match performance for Albania against Ireland. He won the Scottish Cup under Tommy Burns in 1995 and is remembered fondly for scoring against Rangers from a free kick in a 3-0 win for the Hoops.

Rudi joined me today on the Celtic Podcast, the last time we spoke was back in McChuills in Glasgow at one of our live shows before Celtic v Rangers back in December and now on the eve of the Rangers returning to Celtic Park it was nice to catch up.

A lot has happened since then as the Corona Virus spread throughout the World, the league was cancelled and Celtic were crowned Champions again.

Now Celtic take on the Rangers tomorrow and Rudi is well positioned to look ahead to the game after playing and scoring in these big games, Rudi thinks that an empty Celtic Park will favor the visitors and spoke about how big a game this is and how the players should need no motivation

Today is the late, great Tommy Gemmell’s birthday. Tommy was the first Celtic player I ever interviewed back in 2001 and since then I have interviewed numerous players who have worn the hoops but none of them have a story like Rudi.

Rudi was born in communist Albania, where priests were locked up for 20 years, blue jeans and chewing gum were not allowed and it was not until Rudi was in the Albanian international team and playing outside his homeland that he tasted a Coca Cola.

Rudi speaks numerous languages and he and his brother were taught Italian by an old retired priest who had served decades in prison. This would be the language he would talk to Liam Brady in when he was offered a contract with Celtic.

He was refused political asylum after walking out of the stadium in Paris and into a Police station after Albania played France, he exchanged jerseys with Eric Cantona and with only $50 to his name and pair of football boots he forged a professional football, career for himself against all the odds.

Rudi loved his time in Glasgow where he met his wife and she would travel with him when he played in Germany, Cyprus and Japan but his heart remained at Celtic and in Glasgow.

There now is a Celtic Supporters Club in Rudi’s homeland formed by the Albanian president Ilir Meta who is a pal from when they were both at Sports college in his homeland.

His son, Rocco is on Celtic’s books and has also played under-age for Ireland, the Irish connection is through his Granny who is from Dublin. In Albania this has not gone down too well and he has been called a traitor but Rudi says he will advise his son but he will not dictate to him.

There is a book and even a film on the Rudi Vata story that should be told but for the meantime you can listen to his interview by clicking link below and please hit the subscribe button so you never miss and episode.

Enjoy this story of Freedom and Determination.