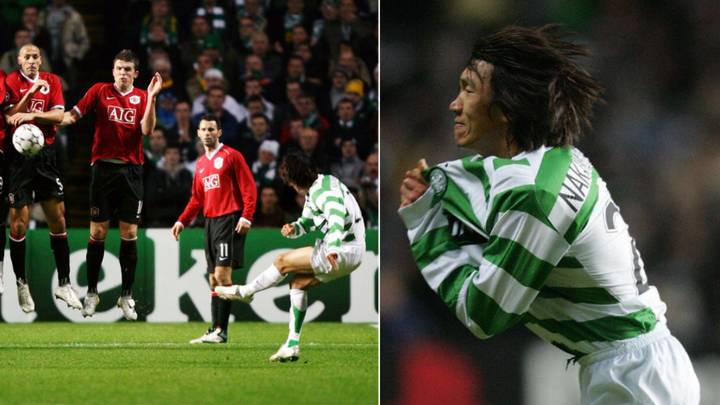 Manchester United! The team of Alex Ferguson, and, long ago of , Matt Busby and Jimmy Delaney! The team which had resurrected itself from Munich and had won the European Cup a year after Celtic did. A team of romance and passion – not unlike Celtic themselves.

Meetings between the two had been scarce – Celtic had beaten them in the Coronation Cup of 1953, and in a famous friendly in 1966 at the start of the great season. But there was Pat Crerand, who could have been one of the greatest Celts of them all had he not come at the wrong time, when things were so bad that he was easily seduced away to Manchester United to the distress of everyone at Celtic Park.

All these things counted as nothing in 2006. This was the fifth game of the section. Celtic had lost the first game 3-2 at Old Trafford, a respectable but disappointing defeat. They had then beaten Copenhagen and Benfica at Celtic Park, but had then obeyed the prevailing law of the time that Celtic were obliged to blow up away from home in Europe. 3-0 at Celtic Park, was tragically balanced 0-3 in Lisbon, a city with happier memories.

Domestically, Celtic were doing well enough, the only blot on the copybook being the failure to beat Falkirk in the League Cup and the consequent defeat in the most heart breaking of circumstances – a penalty shoot-out. Celtic Park was, hardly surprisingly, sold out for the visit of Manchester United weeks before the event, and the crowd saw a good first half, although most honest Celtic supporters were prepared to admit that Manchester United played the slicker football. But Artur Boruc in the goal was in fine form, and the English team didn’t score.

It was much of the same in the second half, except if anything Celtic were beginning to take more of a grip of the game. It looked more and more like a 0-0 draw until well within the last 10 minutes Jiri Jarosik, a man who tended to be kept for European rather than domestic games, earned Celtic a free kick. It was more of a fall than a tackle, let’s say, but the Spanish referee bought it. It was about 35 yards from the goal, slightly to the right. It did not look like an obvious danger, but Celtic had a special free kick expert in Shunsuke Nakamura with an astonishing ability to judge his free kicks to perfection, and this was what he did here, lifting the ball over the wall and managing to get the ball to dip just under the bar.

The heaving masses of Parkhead had still more drama before the end. The Spanish referee awarded United a penalty. Saha took it, but Artur Boruc saved it. It was delirium piled on top of delirium, and the full time whistle came with Celtic winning 1-0 – enough to qualify Celtic, even though not everyone worked that out at the time, and even though Celtic went on to obey once again the rule that says you must lose in Europe away from home, this time in Copenhagen although admittedly in a meaningless fixture.

But Tuesday November 21 was a great European night.