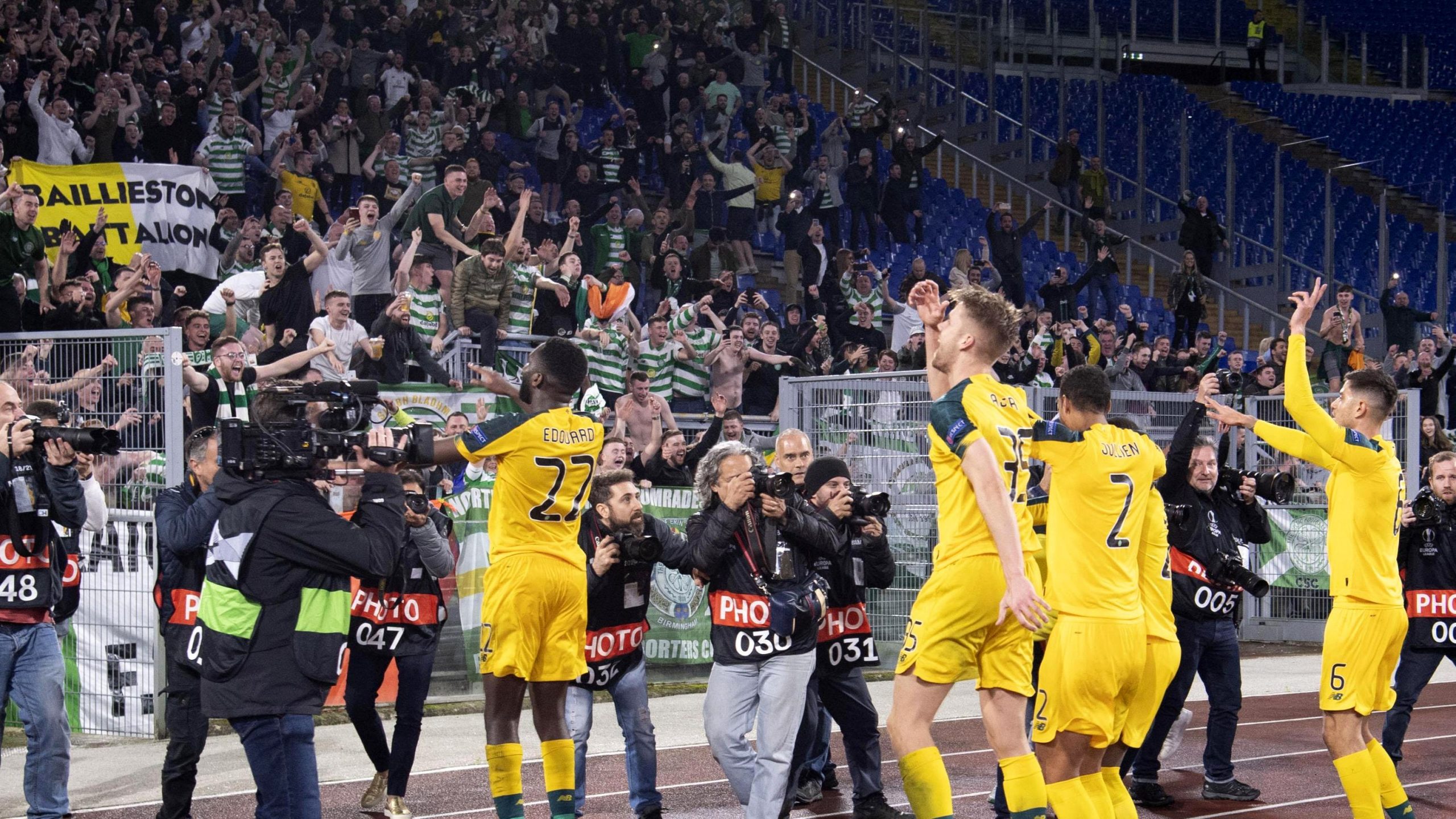 On the Eve of our Europa League opener against AC Milan we look back to last season’s When we turned Rome upside down.

Too many times we have gone to far away cities and came away with nothing only the good reputation of the Celtic fans. In Rome the Celtic players stood up to the challenge and conquered Rome like true gladiators.

Tonight in Rome will live long in the memory of the 10,000 Celtic fans that made the journey to the ancient city of Rome and to the tens of thousands of fans watching on TV throughout the World. We did not start too brightly and when Lazio went 1-0 up I thought to myself “here we go again” another disappointing night in Europe following Celtic. How wrong was I?

After enjoying a few quiet beers with a few mates off the beaten track in the winter sunshine, you know the usual when you get into a session “Sure we’ll have one more and then make our way to get the free shuttle bus from the recommended location” Well one became two and then three etc. and it was now 2 hours to kick off so we opted to get a taxi out to the ground after quickly flagging one down, we were on route with a Roma fan as our driver who informed us he hated his local rivals Lazio and their fascist fans. For his attitude he would be rewarded with a tip.

As he pulled up to drop us off a plain clothes Policeman approached the car and asked if we were Celtic fans, yes we replied and he directed the taxi down the road further. After two Police check points we were sitting outside the stadium enjoying a few more beers before kick off and everybody was in agreement that we would be happy with a share of the points. I bumped into fans that had travelled all the way from Perth and Sydney in Australia for the match who agreed that a point would be well worth the long journey.

Everybody was in fine form and a quick check on social media which was now in Celtic overdrive with fans posting videos and photos including Rod Steward with the Airdrie Bhoys, Neil Lennon at the Vatican with St. Margaret’s Bhoys and the fans from Glasgow and Belfast who bumped into Dermot Desmond doing a tour of the Vatican. Everybody connected with Celtic seemed to be in Rome for this one and it was destination Olympic stadium for everybody.

With kick off approaching fast I made my way up the splendid walk way which houses a tennis club and some impressive statues of ancient Romans, on closer inspection the ancient Romans were carrying modern guns. Not sure what they symbolised but by now my thoughts had turned to the game and the noise that the Celtic fans inside the stadium were creating. As expected I had to produce my photo ID twice and then I was inside with about 10 minutes to kill and I could not believe how poorly supported Lazio were and the gaps and empty seats throughout the stadium out with the section that was closed because of their fascist fans recent behaviour.

I bumped into Brendan McCann who had flown in from Dubai and the famous Scooter Squad from Belfast before settling into my viewing point with my old pal Hilly. We are veterans of these nights and have shared the highs and lows that come with following Celtic over the decades.

As I mentioned above I thought we were in for a rough night when Lazio went 1-0 up but I was proved wrong. Scott Brown was the midfield general leading by example with his trusty side kick Callum McGregor keeping cool under pressure. Forster was outstanding after a shaky start. The central pairing of Ajer and Julien stood tall, ElHamed comfortable throughout, Johnny Hayes never lets you down, an attitude that young players should aspire to and Ryan Christies close ball control had to be put to use to get us out of a few tricky situations.

James Forest (here for ten in a row) the man oozes quality and coolness and his equaliser summed up his qualities. The goal scored into an empty stand sent both sections housing the Celtic fans into wild celebrations. Young and old hugging, kissing and dancing. Jamesy you beauty! Mo El has been outstanding since signing for Celtic and he gets better with every 90 minutes he turns in and last night he turned in another Man of the Match performance.

Big Eddie proved to be a handful for the home sides defence. He was a nuisance and after wasting a few good chances to win the game he slotted the ball into super sub Ntcham who showed his quality by slotting the ball past the keeper in the dying minutes of the game, lightning had struck twice against Lazio and this time the goal was scored in front of the Celtic faithful.

Football can be emotional at times and after the goal celebration I looked to my mate Hilly and he was tearful, I haven’t seen the tough guy shed a tear since we beat Boavista in the semi-finals of the Uefa cup on the road to Seville.

It was nail-biting stuff for every second as the clock counted down till the referee blew the final whistle and the scoreboard read Lazio 1 Celtic 2. Now it was time to celebrate as we had an hour to kill before we would be allowed to leave the stadium. The time waiting to get out flew by as we sang, danced and clapped the team who were celebrating in front of us. The bhoys had qualified for the knockout stages of the competition with two games to spare. 10 points from 4 and unbeaten.

Lazio then played a Celtic video of famous goals and wins on the big screens as we waited to be allowed leave the stadium and we relived those famous moments and enjoyed the one we had just witnessed.

The night air had cooled as we made our way back into the city for a celebratory pint and a pizza. The pint soon turned into many more pints and a few half ones as we chatted about what we had witnessed and replayed the winning goal back on our phones over and over again.

With an early flight to catch I left the bhoys to go and party some more while back at my hotel I couldn’t resist opening the laptop and reliving the highlights of the game where I got to see Neil Lennon and his back room staff celebrating on the famous Olympic running track. I also watched Lenny’s post match press conference. He was absolutely buzzing and so proud of his team.

Rome has fallen – Celtic have Conquered