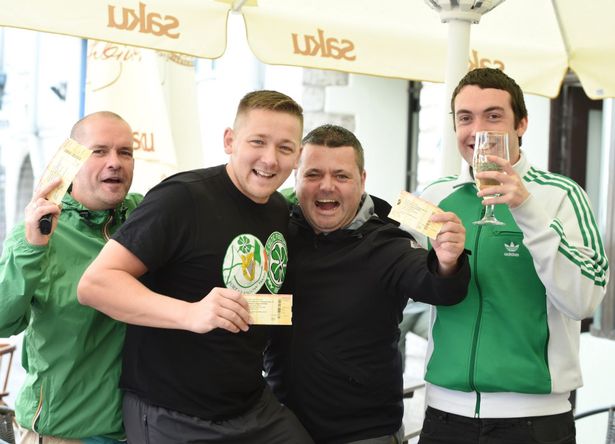 With any luck this will be the last time we have 4 qualifiers as it’s tough to squeeze them all in, especially when the UEFA ball guy turns out a new place to watch a game and you just have to go. Having took a full week for the first qualifier for this I really had to be in and out for this one so I could be in work.

I flew in via Helsinki on the Monday evening getting into Tallinn around 1 am which was just enough time to check-in to the hotel and take a wander down to meet my mates in Mad Murphy’s which was open until 2am and get the trip officially started.

Most of us managed to get booked in to the same hotel in the Old Town. The hotel itself was nice enough, and though I’ve nothing against old timber framed buildings, but the last thing you need when walking along the corridor is having to either jump over or limbo dance under beams like your own personal steeplechase at 2 in the morning.

It had been a few years since I’d visited Tallinn, having went there for the day before the HJK Helsinki match, but I still took the opportunity to take a wander around the old town. Not much has changed, but it’s a nice place.

Like most qualifiers you have to collect the tickets out there, but the problem you are likely to have if you arrange for this to be in a chain hotel is that some people will go to the wrong Radisson in this instance. Besides it was a nice day for a walk and I’m sure they enjoyed it.

We made our way up to the stadium well in advance of the kick off because we knew there was a sports shop attached to it and my mate Charlie has an endless quest to pick up a jersey from each of our opponents in Europe. We fell into difficulty on this one as despite having a pink Nomme Kalju jersey on display they never actually sold them which lead to a failed attempt at bartering and offering to buy the one off the mannequin. He did get one from another stall outside the ground so all was good in the end.

The stadium is a modern, soulless 21st century out of town all-seater and is a far cry from the one that hosted the famous Scotland game when John Collins kicked off and the final whistle blew due to a lack of opponents.  But what the stadium lacked in character it makes up in facilities so we the took refuge in the stadium bar until kick off.

Having comfortable won the first leg is was safe to assume a few players would be rested and we’d hopefully get a look at some of our recent signings so there was no surprised to see a second string take the field. It was good to finally see Julien and Shved get a run out. Whilst we comfortable won the tie 2-0 on the night we never really got out of 2nd gear so we could really concentrate on the upcoming St Johnstone match and the next round.

I’d say everyone associated with the club would be unanimous in that we wanted Cluj to win through in their match, with no one I spoke to really fancying another trip to Tel Aviv, I don’t think we’d get much of a warm welcome from Maccabi. I like most had one eye on happenings in Israel so feared the worst when Maccabi took an early lead and a cheer went up from our support as Cluj equalised shortly after. With Cluj scoring again just before half time, those who never had flight held with Wizz Air all had the phones out and onto Skyscanner at half-time to jump on it when they had a chance. I also know one person who travelled with Mummy’s credit card so they could book depending on the result and took the gamble at half-time on flights to Romania.

As I was on a flight at 6am I went back to the hotel so I could try get some sort of sleep before the red eye flight and a days work when I landed so I never went back to the old town for post match celebrations. But a dampener was put on the whole trip when I read through messages whilst sitting in Helsinki Airport from the previous evening, that a few of my mates were attacked on their way back to the hotel by guys tooled up with belts resulting and a few stiches and having to travel back Terry Butcher-esque with their heads wrapped in bandages. It was a totally unprovoked attack and the guys are alright thankfully but was a sour note on another wise cracking trip.

Scott Crystal has been travelling to the games on the Renton CSC for longer than he can remember. He has been watching games on the telly with the Hayes Bhoys since 2010 when he moved south. You’ll find him in one of these 2 places if he’s not off to Hamburg to see St Pauli. He is currently on a mission to tick off every country in Europe so he is always hoping for help from the UEFA ball guy to achieve this.