Rewind: ANOTHER  NIGHT  IN LISBON 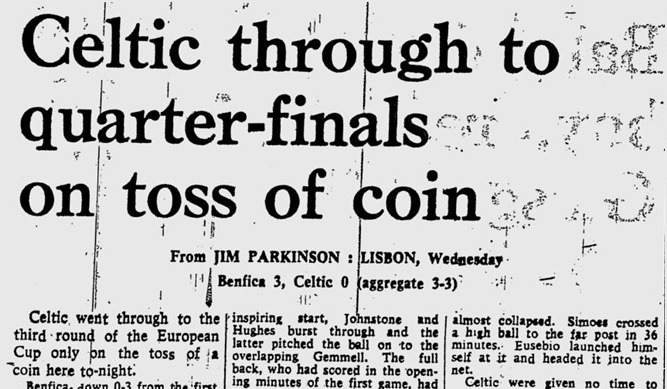 Over fifty years ago, Celtic had another victory in Lisbon. Well, that statement has to be qualified because we didn’t really win a game of football. In fact we drew it, and then won through to the European Cup quarter final by the astonishing method of tossing a coin! It was generally agreed however that Celtic deserved to win, and that justice was in fact done.

It was Celtic v Benfica. The first leg at Celtic Park saw Celtic at their 1960s best, beating Benfica, Eusebio and all, 3-0 with goals from Gemmell, Wallace and Hood and it really should have been more. Another good goal was chalked off, and several chances were missed – but it was generally agreed that Celtic had done enough to win, a point reluctantly agreed by the Portuguese Press who still, of course, recalled Celtic of two years ago and still loved them and their supporters.

The second leg was more or less ignored by radio and television. The game actually kicked off at 9.45 pm Scottish time, and it would be early the following morning before the game finished, and most supporters went to bed unaware of what had happened. The morning papers had the result, but not the circumstances and thus there was a huge surge in the sales of The Evening Times and The Evening Citizen to find out the details.

And there was another huge story that Thursday November 27. Rangers had sacked their Manager, David White! He had been undermined by his players who did not always do their best for him and by a sustained campaign in the Scottish Daily Express, an unashamedly pro-Rangers newspaper and spearheaded by Willie Waddell (who, funnily enough, got White’s job!). This had been going on for some time, but the last straw was last night’s European defeat to Gornik of Poland. But everyone knew that it had really been Jock Stein and Celtic who had cost White his job!

So Celtic came back to Glasgow with their game of last night now relegated to second place. The game was played in continuous heavy rain. One would have thought that Scottish players would have been used to that, but at half time they were two down. 3-2 on aggregate, and a rearguard action was called for. Possibly some controlled aggression might have been a better plan of campaign, but in the event, the heroes were all in the defence. 45 minutes came and went, but the Dutch referee allowed unaccountably another three minutes, and Benfica scored at the end of the three minutes. But had they? The final whistle went immediately after, and there was no restart. Was the final score 3-2 or 3-3? No official announcement was made, the players left the field with the great Eusebio not doing much to consolidate his undeserved reputation for sportsmanship, and then the referee told everyone that Benfica had in fact scored.

The players then came out for extra-time. Once again, Celtic might have just nipped a winner, but no goals were scored by any exhausted player on that now extremely heavy pitch. So 3-3 on aggregate it was. No third game at a neutral venue (they were usually a financial disaster) and no penalty shoot-out as yet. So it was the toss of a coin in the referee’s room – a tiny room with two captains, two Managers, two linesmen, one referee and a few lucky journalists!

Billy McNeill called “heads” and won – but that was only to give him the right to call in the real toss! He called “heads” again and thus time the referee failed to catch the coin and it spun onto the floor, rolled from one wall to another, but crucially it was the head of the King of Holland (NOT King William of Orange, as was subsequently claimed) which was facing upwards on the Dutch guilder piece. Celtic were through! By this time it was well past midnight Scottish time, and it was a news bulletin on Radio Two (which at that point in 1969 provided soft music for insomniacs) which told the real diehards (and I was one of them) what had happened.

It was of course an awful way to win a football match, and Sir Bob Kelly nobly protested about it, adding less convincingly that if Celtic had lost he would not have bothered. Very soon after that penalty shoot-outs were introduced.

The events of that night and early morning were significant. Had that coin landed the other way up and had Celtic been out of Europe, would David White have retained his job at Ibrox? Possibly not, for the job was too much for him anyway. Celtic, already holders of the Scottish League Cup went on to win the Scottish League with a great deal of ease, beat Rangers in the Scottish Cup in February but then lost in a controversial final to Aberdeen. Worse than that, having beaten Leeds United in the European Cup semi-final, they went on to press the famous Scottish self-destruction button in the final and lost unaccountably to Feyenoord. But perhaps the loss of the three goals in Lisbon that night in November was trying to tell us something?