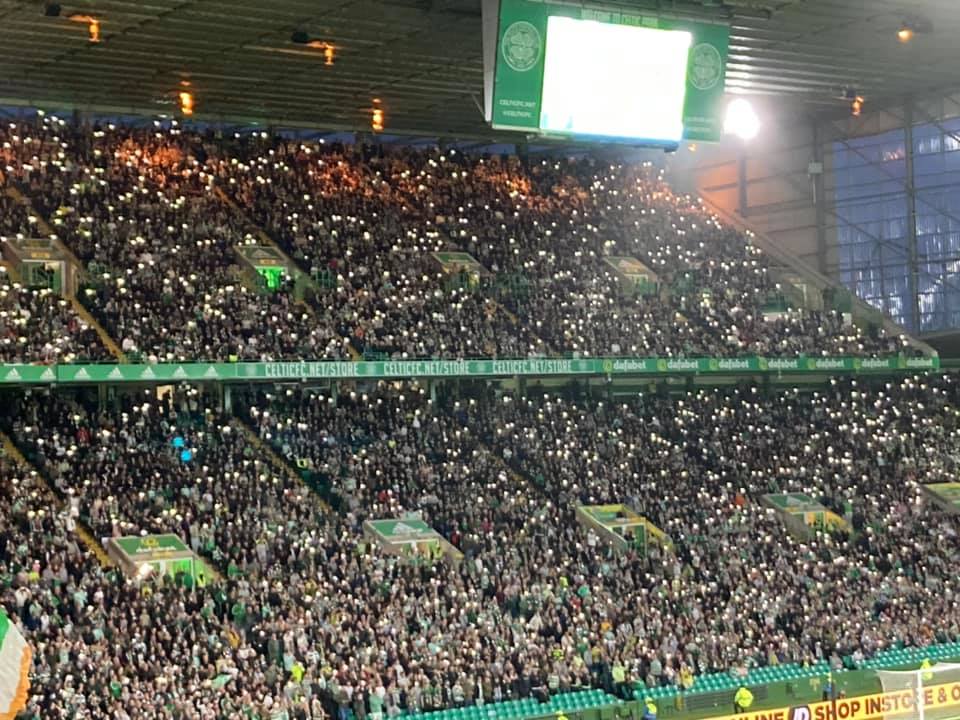 The crackle and spark of a typical European night returned to Celtic Park last night in an enthralling and often breath-taking 95 minutes of fast flowing football. It can be easy for some people to dismiss the role played by Celtic fans when we get right behind our team, but a renewed sense of camaraderie flowing from the stands out to the pitch and dugout and back to the fans again has galvanised the Celtic family.

Our new manager Ange Postecoglou with the help of a smattering of new faces has put the fire back in the belly of players and fans.  The high tempo lung busting approach from the new boss is a return to playing in that unmistakably Celtic Way.

Long before the 19:45 kick off fans were buzzing to be part of what we hoped would be another special European night in Paradise. The fourth match in 8 days could do little to ally the excitement of a voracious fan base who have been starved of watching their heroes for too long.

The electric atmosphere in the stadium before kick-off was matched by the lightening quick start to the match from our visitors AZ Alkmaar. Twice in the opening 10 minutes the Celtic goal was threatened and only a fantastic reaction save from Joe Hart kept the match level when he turned a low drive on to the post with his foot.

Celtic took advantage of the save and began to build on their new quick passing playing style, a style that makes it appear our players have more room and freedom to exploit opposition weaknesses. This coupled with dynamic movement from an increasingly interchangeable forward line means defences will not get a moments rest or chance to regroup.

This level of movement & drive was pivotal in creating the opening goal.  Tom Rogic capitalised on a loose ball, controlling it deftly before making space on the left and delivering a perfect ball into the box for new goal sensation Kyogo to fire into the roof of the net.  The quick feet of Rogic paired with the quick thinking and movement from Kyogo left the Alkmaar defence wide open and a goal down after only 12 minutes – unsurprisingly the noise levels in the stadium were cranked up again.

Celtic continued with wave after wave of attack, both Abada & Turnbull ensuring Verhulst in the Alkmaar goal had to be at the top of his game to keep the score at 1-0.

In to the second half and AZ Alkmaar continued to exploit the spaces left in our new style of play and the uncertainty that still lingers in our defensive line.  The high press can & will leave our defence open throughout this season, however that pressing style was responsible for Celtic doubling the lead just after the hour.

Kyogo benefited from the enforced errors in the Alkmaar defence before picking out James Forrest whose deflected shot was diverted past the keeper into the net – 2-0 up and it was no more than we deserved.

With 30 minutes remaining there was still a number of stiff tests for our defence to face, but the ever hungry Anthony Ralston thrived on the new found responsibility and faith given to him by the manager. With the visitors committing more players forward Celtic could and should have added a third goal however an outstanding double save from the Alkmaar keeper ensured the 2nd leg is poised to be another fascinating & no doubt nerve jangling night for Celtic fans.

Important to note the level of leadership that now appears to be instilled on the players on the field, there is much more talking, directing and coaching amongst the team ensuring they are all working towards the same goal.

Watching Joe Hart speak to the manager & then convey the message to Callum McGregor & his defence is a critical change to what we endured as fans during the lockout matches of last season.

Man of the Match – Anthony Ralston