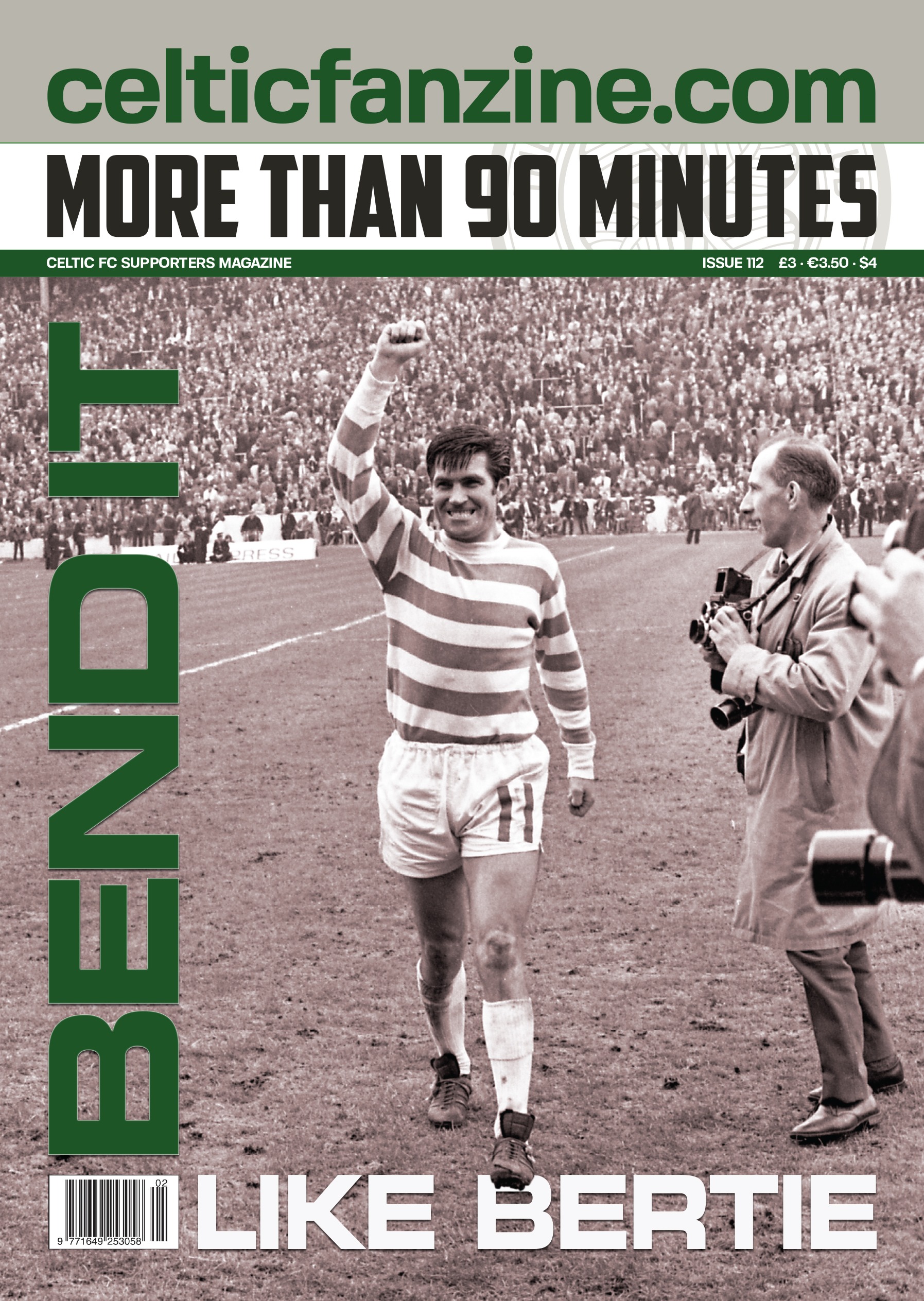 Pre-Order More than 90 Minutes Celtic Fanzine Issue 112 and we will stcik it in the post once it lands at HQ from the printers.

The Legendary Bertie Auld graces the cover of the new edition of More than 90 Minutes as we enter our 20th year of publishing the fanzine. The cover picture shows Bertie with his hand raised with clenched fist after Celtic beat Rangers 4-0 in the 1969 Scottish Cup Final. Our regular columnist, John Fallon was outstanding between the sticks that day and there is no better man to write about our cover story than Celtic Historian David Potter.

As 2020 came to a close we pay tribute to a great supporter of Celtic and indeed our little publication, John Wilkes after his sudden and sad passing before Christmas. John lived for family, friends and football. We also pay tribute to former Celtic player, Tommy Docherty and the greatest of them all Diego Maradona.

As mentioned above Celtic Legend, John Fallon is back with his no holds barred column on all things Celtic. Trust me age has not mellowed the Original Holy Goalie who has seen and done it all from childhood Celtic fan to an amazing medal haul in the most famous Celtic team of all time before playing against Celtic for Motherwell and then returning to Celtic Park as a fan once again.

With tensions running high among Celtic fans with all that’s going on at Celtic on and off the park, Glasgow based columnist, Mick Kane writes about how The Celtic support have brought about a change of regime before and can do it again.

Dublin based columnist Eoin Coyne asks questions on what has gone wrong as the title looks to have been handed to the Rangers without little resistance by the New Year in what should be a historical season and the one that delivered the 10IAR. While fellow Dub, Ciaran Kenny looks back at a Cup Final like no other and the remarkable Quadruple Treble.

Celtic Author, Liam Kelly writes about the Donegal field that has become a Celtic landmark while Potters Player features Jamie Weir and Paddy McMenamin looks back at the Ibrox Disaster.

Plus, all the regulars including Editors Desk, Since Last Time, Snap and Tim Molloy.