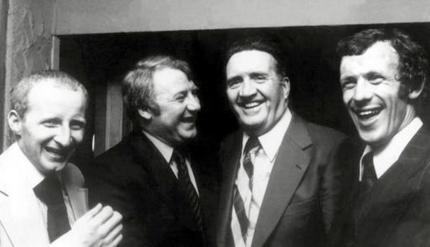 The remarkable footballing life of Tommy Docherty came to an end on Hogmanay 2020. He was 92, and he had been ill for some considerable time.

The funny thing about Tommy Docherty was that he was Celtic through and through. From a tough, but loving Gorbals background, Thomas Henderson Docherty was born in 1928 and joined the club in 1948 after he had finished his National Service in Palestine (not the easiest nor safest of locations) but he played only 9 games for Celtic before departing some 15 months later for Preston North End.

Things might have been different for Tommy with the team that he loved and would continue to love all his long life, but life was absolutely chaotic at Parkhead in the late 1940s and to be honest, he was never really given a chance. But he was a good enough player for Preston North End, earning a loser’s medal in the 1954 English Cup final (under Manager Scot Symon!) after they had regained their position in the First Division. He also played for Arsenal, and 25 times for Scotland where he must have learned in the 1950s a great deal about how NOT to run a football club.

His lengthy managerial career with countless clubs began with Chelsea and it was with them that he had the most success, winning the English League Cup in 1965, and he might have been better to stay with them. Another team that he might have been better to stay with (and he admits this himself) was Scotland, for things were beginning to happen with Scotland in 1972, but he chose to go to Manchester United instead, and was honest enough to admit that it was for the money.

There in 1974, he ,managed to get them relegated but actually kept his job, brought them back up again and in 1977 won his only major triumph – the FA Cup. Sex then reared its ugly head, and he was sacked for having an affair with the physiotherapist’s wife.

It looked like another classic case of Scottish self-destruction, but this was a steady relationship rather than the somewhat undignified affair that it was described as in the media, and their marriage lasted until death separated them.

He made no bones about hating Manchester United after that, but his subsequent managerial career with many clubs in England and Australia brought him no great success or happiness. He was a great character, however, and it was a pity that he did not stay longer with Celtic. He might have made a difference. He was a great comedian with many quips and one liners, on one occasion saying that corporal punishment for football hooligans would “halve the problem by two thirds”. He might have been a great Manager for Scotland as well.