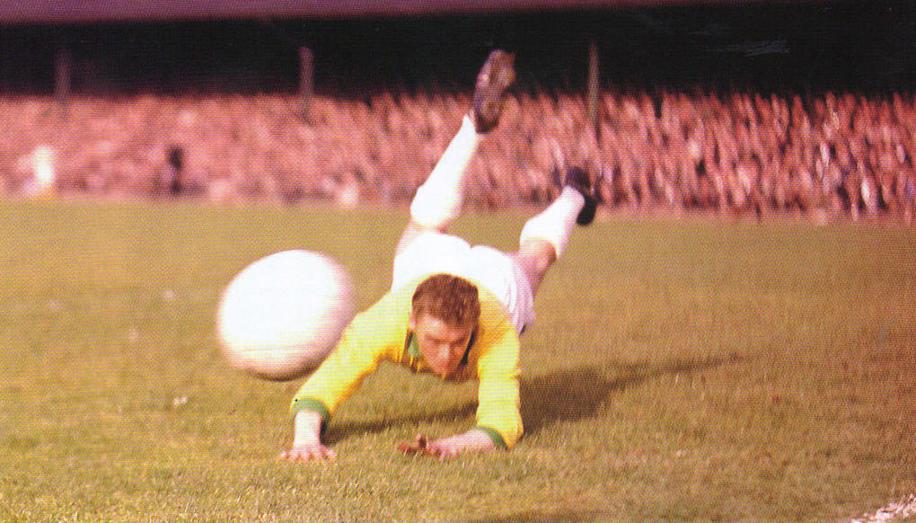 I had often been told by people who should have known better that Rangers = Scotland = blue as distinct from Celtic = Ireland = green, and, as I was young, I almost believed that. That is until the events of April 1961 when Scotland went down 3-9 to England at Wembley – and how the Rangers fans rejoiced!

The goalkeeper, you see, was Celtic’s Frank Haffey and he was a convenient man to blame for it all! They had been hurting for three and a half years and were generally unable to deal with the chants of “Seven past Niven” with reference to the Scottish League Cup final of 1957, and now at last they had their revenge. They could chant “Nine past Haffey” “Haffey Nine” or simply the inane “Haffey! Haffey! Haffey!”. Oh, it must have been great to be a Rangers supporter at Wembley that day!

Unfortunately, they ignored two rather major obstacles to their glee. One was that the nine goals were scored by Englishmen, not Celtic players, and the other was that the two Scotland full backs that day were Bobby Shearer and Eric Caldow who both played for – er – Rangers!

Jokes circulated that the ball was orange in colour, so that Haffey and McNeill were afraid of it, and Shearer and Caldow didn’t want to kick it in case they hurt it! The blame for this Scottish disaster – well up there beside Culloden and Flodden – must be shared!

Football can be cruel some times, but as for Frank, he had to bounce back. He really didn’t do himself any favours by allowing someone to take his picture at a railway station on platform 9, so that 9 appeared above his head, but it was often forgotten that in last year’s game at Hampden, he had actually saved a penalty!

He never played for Scotland again, and it would have to be said that his performances for Celtic were often a matter of some argument and dispute on the buses or trains home. Eleven days after the Wembley game, he was playing in the Scottish Cup final replay against Dunfermline, and a piece of sloppy goalkeeping gave away the second goal. One could argue that the game had gone by that time anyway for it was in the last minute, but it was in rather sharp contrast to Eddie Connachan in the Pars’ goal who was inspired that night – and being inspired, he became lucky as well! Eddie, like several others in the Dunfermline team, was apparently a Celtic supporter and of course their Manager was a fellow called Jock Stein.

Two years later, his goalkeeping earned Celtic a replay against Rangers. A little luck and more confident finishing might have even earned Celtic a win over Rangers who were a better side, but the Sunday papers that day were full of headlines like “Franktastic!” and “Fearless Frank” but the replay saw normal service resumed and a dispirited Celtic team well beaten. Frank was possibly to blame for at least two of the goals, but some newspapers also said that he did well to prevent double figures, so inept were the rest of the team.

The following season saw a pantomime at the end of October. Celtic recovered from their awful start, and on the same day as Rangers were winning the Scottish League Cup, were beating Airdrie 9-0. They were awarded a penalty which they hardly needed, and in response to the chants of the crowd, Frank was allowed to take it – and duly missed it – but applauded the Airdrie goalkeeper before charging back up the field to his own goal!

A couple of weeks after this, he had the misfortune to break his ankle in Glasgow Cup game at Partick Thistle, which effectively ended his Celtic career for John Fallon now took over, and Frank eventually left for Swindon Town and eventually Australia.

Arguably, a better singer than a goalkeeper, Frank released several records like “The Dear Little Shamrock” and “Slattery’s Mounted Fut”, and he certainly tried to make Celtic supporters like him. Sadly, although he had many fine games for the club, he lacked the one quality that goalkeepers always need, namely reliability. It was a pity, for we wanted him to do well!