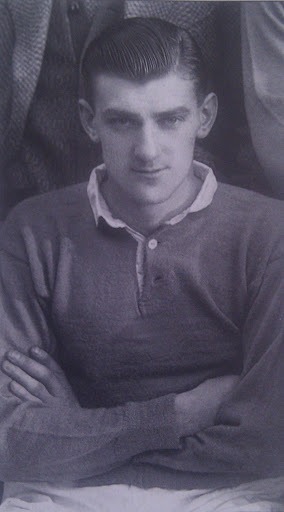 Alec Thomson is one of the most under-rated Celts of them all, but those who saw him will aver firmly that he was one of the best of them all. McGrory was of course something special. But who made McGrory? Who was the “fetch and carry man”? Who was the silky passer? Who was the forager in chief? McGrory was fortunate in that he had loads of such people in his career – Jean McFarlane, Peter Wilson, Peter Scarff, Frank O’Donnell, Johnny Crum, Willie Buchan (and that is without mentioning Patsy Gallacher and Tommy McInally who were superstars in their own right) but none of these men did more for McGrory than the slightly built, frail looking and unassuming bhoy from Buckhaven with the ordinary name of Alec Thomson.

Born in 1902, “Eckie Tamson”, as he was known in Fife, was, fortunately for him, just too young for the 1st World War but he would have left school at any early age and worked down the pits working in slavish conditions for the detested Wemyss family of East Fife. He started playing for Glencraig Celtic, then Wellesley Juniors before he was invited to join Glasgow Celtic in October 1922. His strong point was his passing ability. In this respect he was perhaps considered to be a potential successor to Jimmy McMenemy, but that was a big “ask” for the shy young man with the Fife accent, the jet black hair and the consumptive looking features which characterised those who worked in the mines of Fife. He made his debut in November 1922, but that was not a great Celtic team to be part of, and le lost two of his first three games. It was the following year before he became a regular at inside left – but when the occasion demanded, he was equally at home at inside right.

Success, of course, has to be worked for, but Alec was not afraid of hard work. He was in awe of Patsy Gallacher (wasn’t everyone?) but he soon became a respected member of the side with the personality to encourage, quietly and gently, others not least his contemporaries Peter Wilson and Jimmy McGrory with whom he soon established solid friendships. The 1925 Scottish Cup semi final and the final (5-0 v Rangers and 2-1 v Dundee) have of course been immortalised by “King James and Patsy” but he would be a fool who would neglect the contribution of the others in that side, not least the tireless Thomson who had already earned for himself the nickname “Eveready”  after the electric batteries of that name. It was his first Scottish Cup medal.

It was the following season 1925/26 that was his best, as the immortal forward line of Connolly, Thomson, McGrory, McInally and McLean swept all before them to win the Scottish League and (more importantly perhaps) earn a mention in the same breath as Bennett, McMenemy, Quinn, Somers and Hamilton of two decades previously. They played fast breathtaking football with the two inside forwards – Thomson and McInally, totally different kinds of players and totally different personalities as well – complementing each other and provided the ammunition for McGrory. The League was won, the Cup was narrowly lost that year, and Thomson won his first Scottish cap as Scotland beat England 1-0 at Old Trafford. It tells you all you need to know about Scotland selectors that “Eckie” was not chosen again until years later when he was well past his best.

1927 was less successful but he did win his second Scottish Cup medal, this time against many of his old friends from Buckhaven and Methil who were playing for East Fife, and having now made good friends with another Thomson from Fife (indeed from the same junior football team in Wellesley) the outstanding young goalkeeper John. Indeed by 1931 when the club were back among the honours, yet another Thomson, Bertie was with them as well.

The intervening years between 1927 and 1931 had not been easy for all sorts of reasons, not least the economic depression. But 1931 was a superb year for the club with a breathtaking Scottish Cup win and a tour of America. September 5 changed all that, though, and Alec was as devastated by his friend and namesake’s tragic death as anyone. But he fought back to win another two Scottish caps and his fourth Scottish Cup medal in 1933.

He played for the club until the end of the 1933/34 season and finished his career with Dunfermline Athletic. He was one of the best passers of the ball that Celtic have had. He was not particularly fast but he worked hard. His slight figure encouraged opponents to think that he could be bullied off the ball. Not so! He had a great deal more strength than it appeared. He also had the ability to dribble, his slight figure drifting past opponents at speed without his feet appearing even to be on the ground! He was not known as a goalscorer, yet he managed to score 98 goals for the club in the eleven years that he played for Celtic. But he was basically a quiet, modest man who loved the club he played for. After his retirement from the game in 1937, he moved through from Fife to the West and died in November 1975 at, of all places, Larkhall!

A couple of days after his death, a minute’s silence was held for him at Celtic Park before a game with Motherwell on a raw, damp, typically November day. Celtic were not going through a purple spell. It was the year that Jock Stein was in hospital recovering from his car accident, and the League Cup final had recently been lost to Rangers as Celtic struggled to cope without the now retired Billy McNeill and the badly injured Jock Stein. A younger supporter was heard to ask politely of an older one who this Alec Thomson fellow was. It was a reasonable question, for Alec was far from being a name on everyone’s lips, but the young man’s question was answered gruffly “Alec Thomson – McGrory’s fetch and carry man – and McGrory woudnae hae been half the man he wis withoot him! And we could dae wi him noo!” And there were tears in the old man’s eyes as he said it!