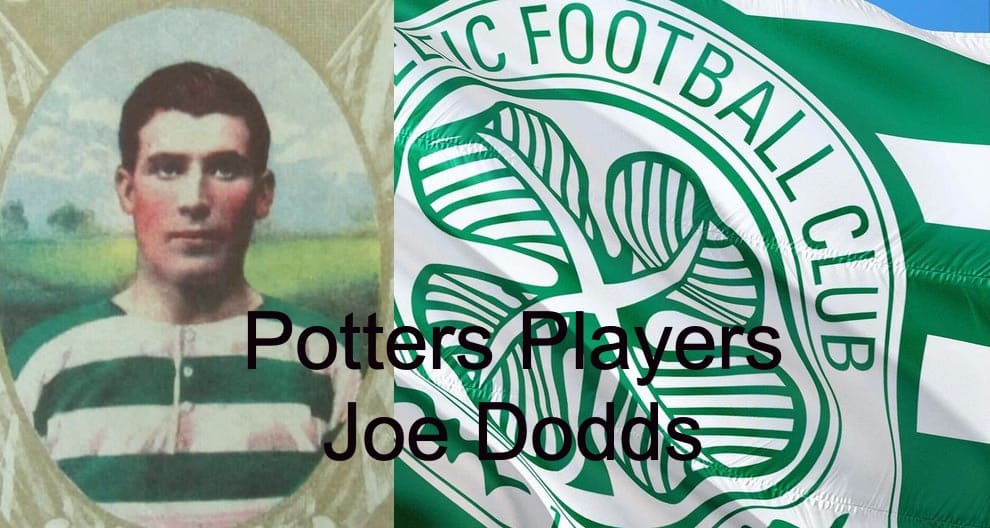 There was a time when any old Celtic supporter would begin a discussion on the merits of football teams with “Shaw, McNair and Dodds…” and would then go on to say that there never was a defensive trio like them. He would be talking about the years round about the start of the Great War and throughout the conflict; these three would be looked upon as the greatest defenders in the world.

Joe was born in 1887 in Carluke and joined the club in 1908. Not surprisingly, given the strength of the Celtic team of that era, he found it difficult to break in and to displace at left back the excellent Jamie Weir, the famous reciter of Burns poetry as well as being a tough, hard working, grimly determined left back. But Dodds was no less determined and by 1910/11 he had found a place at left half originally before settling in his favourite left back spot, although it was at left half that he won his first Scottish Cup medal against Hamilton Accies in April 1911.

Another Scottish Cup medal came his way in 1912, but it was 1913/14, one of the best seasons in the history of the club, that saw Dodds at his best. Not only did Joe win a League and Cup double for the club, but he also played for Scotland three times, including the great 3-1 win (inspired by his great friend Jimmy McMenemy) over England at Hampden in April.

But then came the Great War. Joe’s brother was killed at the Battle of Loos in 1915, (by an odd coincidence a similar thing happened to McMenemy) but he played on and won a Glasgow Cup medal a few days later. He himself was eventually enlisted as a Driver in the Royal Field Artillery in the latter stages of the war, although one suspects that he was a reluctant conscript. He was far too gentle and peaceful to have enjoyed enlisting for that slaughter.

He returned to win another Scottish League medal at the end of the 1918/19 season, but like everyone else of this era, he fell out with Maley in 1920 and went to Cowdenbeath for a season. He returned to win another League medal in the 1921/22 season, but then departed forever after that. He made his peace with Maley however, and the two remained friends all the rest of their lives.

He was a fine attacking full back in the Tommy Gemmell mould (McNair was the more defensive minded of the two of them) and like most full backs of that time knew how to tackle and tackle hard, injuring himself on occasion in the process. Not for nothing was he called Fearless Joe. A total of 9 Scottish League medals and three Scottish Cup medals speaks for itself, and is all the more praiseworthy when one considers that what was going on in the world at the time. It was often said about him that no one could ever remember Joe having a bad game. His passing was often described as faultless.

He retained his friendship with Jimmy McMenemy all his life (McMenemy had been “groomsman” at his wedding in 1916) and the two old worthies died within months of each other in 1965. Joe’s death at the age of 78 was much mourned.

An Evening With Chris Sutton Platinum