Home / Events / No One Is Illegal – The Rudi Vata Story

No One Is Illegal – The Rudi Vata Story 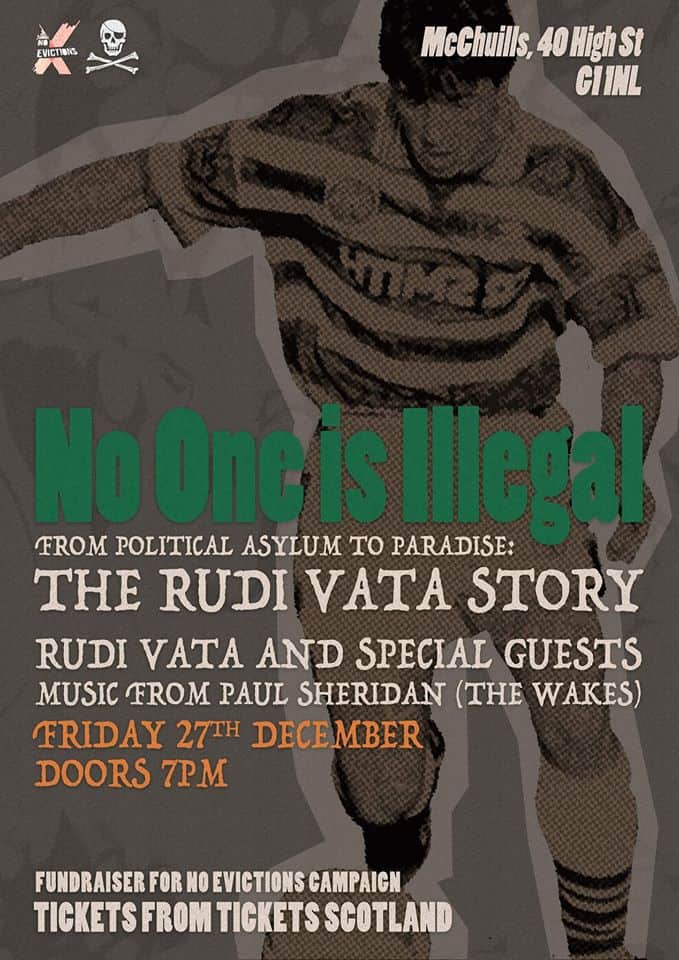 Over the past 18 years I have had the pleasure of interviewing players who have pulled on the famous green and white jersey of Celtic for both the fanzine and at our live events. The first interview I did was in the back of a shop in Newry with the late great Celtic hero and Lisbon Lion, Tommy Gemmell and the most recent was Alan Thompson one of the main stays of Martin O’Neill’s team and a wizard on the pitch with his left foot the scourge of many teams including the mighty Barcelona, Liverpool and Rangers ( on 7 goal scoring occasions) .

In between I have interviewed many more, on two occasions over the last 3 years Rudi Vata has joined us pre-match at Malones in Glasgow. For anyone who is not familiar with the Celtic AM format it is 4 x 15 minute interviews with Celtic Minded people from former players to fans and everything in between.

Rudi may have not hit the heights of Tommy or Alan during his Celtic career but his story can not be told in 15 minutes and his is a unique story so we have decided to host a night with Rudi and special guests in McChuills to hear his story in full, we will also be joined on the night by Paul Sheridan from the Wakes who will kick off and close the show with some songs which will fit perfectly into Rudi’s story. We will also be making a donation on the night to the No Evictions campaign.

Rudi grew up under a dictatorship in his homeland of Albania and while playing for his national team in Paris v France, he feigned injury, left the stadium with $50 dollars in his pocket and claimed political asylum in a Paris Police Station.

Rudi’s story is one of poverty, struggle, determination, sacrifice and ultimate success on the football field and in business since retiring. His son Rocco is playing in Celtic’s youth system and has recently made his debut for Ireland and scored the opening goal in his second appearance in the Green jersey.

It was Ireland were Rudi was discovered by Celtic, when after the fall of the Albanian dictatorship he would be recalled to the national team and after a man of the match performance was approached by Liam Brady about signing for Celtic.
Rudi represented his country 59 times and became the first player from his country to win a major honour in a western league when he featured in the Scottish Cup under Tommy Burns guidance.

Rudi’s time at the club was at a period when Rangers were dominating, he was in and out of the team and he was there when the club almost went under until Fergus McCann and the Rebels took control of the club.

The venue is small and intimate and I would advise getting your tickets early .