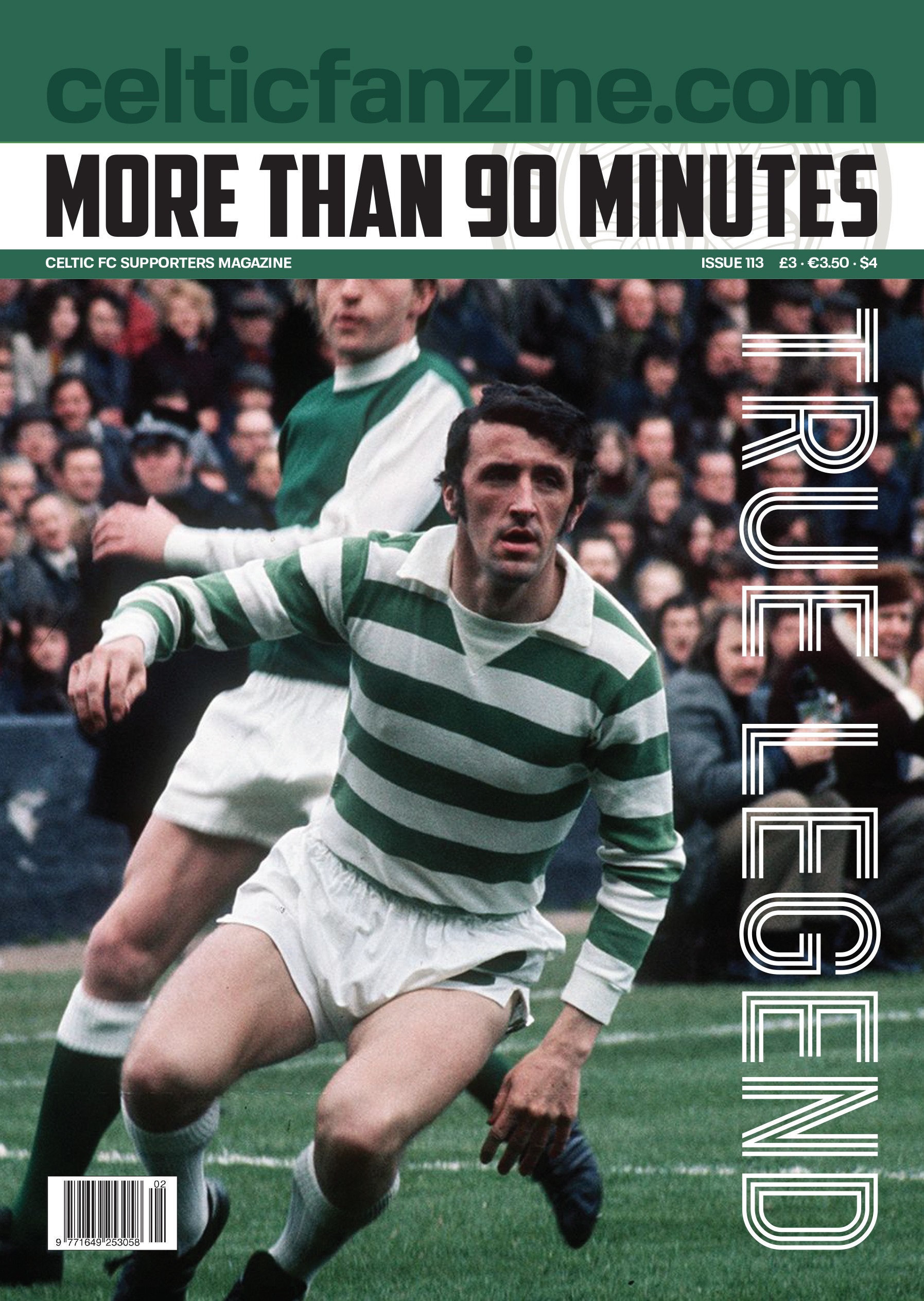 More than 90 Minutes has landed from the printers and will be in the post today to all subcribers and those who pre-ordered. Order your copy today.

More than just headlines cut and pasted from the tabloids. Independent Celtic fan media should never peddle the same crap as the Sun or the Record. These tabloids have proved over the years that they are no friends of football fans.

A True Celtic Legend, Danny McGrain graces the cover of Issue 113 of the fanzine before his famous beard was grown and there were no clash of colours as the image shows Danny in action in the famous hoops sporting a big collar as was the fashion back in the seventies. The jersey has no sponsor, no sports label or club crest.

Legendary Celtic Author, Tom Campbell who appeared at Celtic AM before the lockdown makes his long overdue debut for the fanzine as he looks back on the career of Danny McGrain who made 439 appearances in the hoops.

Lisbon Lion John Fallon is back as honest as ever as he calls for change at the club as the season stumbles on. Editor, Andrew Milne looks back at Peter Lawell’s 17 years as CEO at Celtic after the club announces he will step down at the end of the season. The Good, the Bad and the Ugly.

Selfless Celtic Trust member,  Jeanette Findlay who has done so much for the Celtic support over many years brings us up to date on the Trust as membership continues to grow. The CT  gives ordinary fans and shareholders a Collective Supporters Voice.

David Potter pays tribute to Jo Venglos and Shuggie Edvaldsson who both sadly passed away recently. Alec Bodenfeatures in Potters Players. Young Author, Liam Kelly looks at the career of Willie Maley, the man who made Celtic

Dublin journalist, Rachel Lynch is feeling let down that the 10 was given up so easily. While Eoin Coyne thinks we are bottomed out and looking up. Paddy McMenamin looks back at Neil Lennon’s Celtic career and how he has suffered for wearing the Green and White of Celtic, Lenny’s time may be up but he deserves respect. Ciaran Kenny reminds us that Celtic’s for Life and not just a season.

Talented Young Glasgow Poet, Erin Boyle makes her debut for the fanzine after appearing on the Celtic Soul Podcast with A Quadruple Treble, Beautiful Sunday, 20th December 2020. A day and game we will never forget as the Bhoys done the business in an empty stadium to make history as we went through every emotion while watching from a distance in our homes.

Regular contributor, Scotty Alcroft joins us for a conversation to talk about his new book, “Bonded By Burns” while Martin Donaldson looks back in GOAL! at Henrik Larsson’s strike at the Estadio do Bessa on the 24th of April 2003, the goal that would bring us all to Seville.

We look back at the talking points of the past month in our regular Since Last Time column.  Snap takes us back to the 1980 Scottish Cup final in pictures. Tim Molloy is back with his regular column in our native tongue.

The digital edition of More than 90 Minutes also available to download.